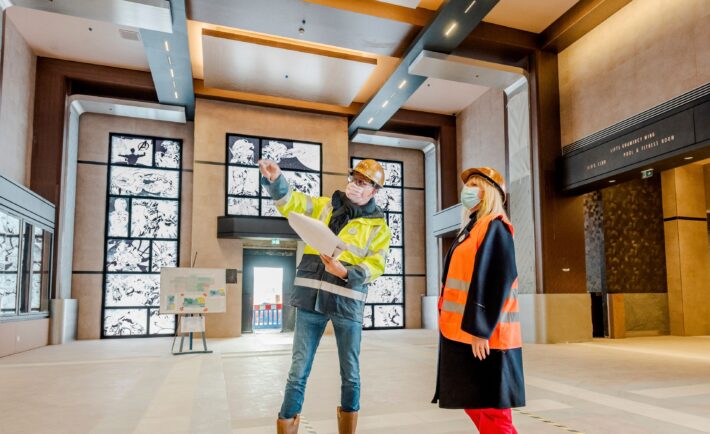 Work is continuing on the construction of Disney’s Hotel New York – The Art of Marvel as new behind the scenes photographs give a progress update on the renovation.

The ambitious transformation of Hotel New York was initially planned to open back in June of this year but was obviously delayed as work ceased in March due to the COVID-19 global pandemic and resort’s temporary closure. As the parks are now into its second temporary closure there were fears work on the hotel would be paused again, though this was fortunately not the case thanks to government advice and appropriate health and safety measures by the construction team.

An update on the progress of the hotel was providing during the IAAPA Virtual Education Conference, in which Disney Parks, Experiences and Products Chairman Josh D’Amaro provided all the latest on upcoming projects throughout all the Disney resorts, including Avengers Campus, Spider-Man: Web Slingers and Cars Route 66 Road Trip.

As can be seen, the new look lobby is really taking shape with the new Marvel comics inspired mural already installed and looking identical to that we saw in the original concept art.

DLP Report were also able to capture this beautiful shot of the Thor inspired chandelier, set to be the main set piece of the new Manhattan Restaurant within the hotel. The chandelier is of course based on the iconic skyline of Asgard as seen in the Marvel universe.

First look at the Asgard themed chandelier in the upcoming Manhattan Restaurant at Disney’s Hotel New York – The Art of Marvel, and concept art once finished: #IAAPAExpo pic.twitter.com/gLcsod0DkG

Disney’s Hotel New York – The Art of Marvel will be the first Disney hotel themed to the comic book giants and celebrates over 80 years of storytelling, colourful characters and magnificent art. Guests experience an Art Deco style accommodation with Marvel super hero touches all throughout, be that posters, storyboards, props or original pieces commissioned by the diverse and limitlessly talented Marvel artists.

Although originally intended to open this year, delays in construction and the park’s closure has ultimately lead to the hotel being pushed back to a 2021 return. As of yet there is no announced re-open date for Disney’s Hotel New York – The Art of Marvel but be sure to stay tuned here and on Twitter for all the latest on the hotel and the rest of Disneyland Paris as it happens.