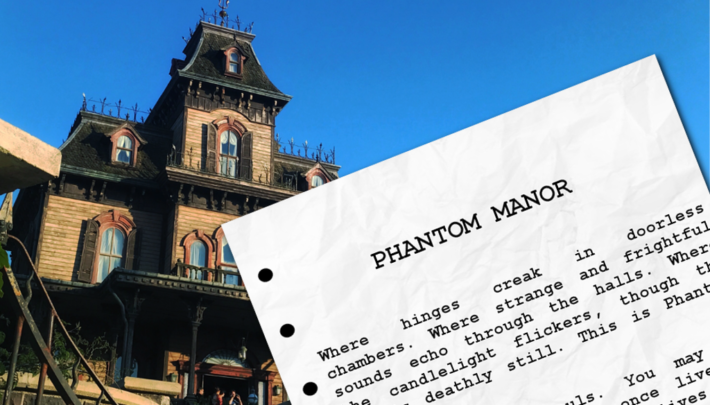 In the waking world, Phantom Manor is currently the subject of one of the most extended periods of downtime any Disneyland Paris attraction has ever seen. After years of minimal, shortened refurb closures management made the decision to mark the 25th Anniversary prep as time to bring older attractions into the 21st century. This movement saw beloved classics like Pirates of the Caribbean and Big Thunder Mountain get lengthy closures lasting months. Now it is the haunted mansion on the hilltop’s turn with downtime already in its fourth month and many more to go.

One thing both of the completed refurbs had in common was the fact the pair saw additions when reopening their doors. Pirates of course was first in its family to debut a brand new scene featuring the iconic redhead and the now infamous “explosive finale” made the hop from Anaheim to Thunder Mesa after Big Thunder’s colossal closure.

This has of course raised eyebrows when confirmation finally came that Phantom Manor was next to join the club of long refurbs. Is Ravenswood Manor next to get a major shakeup to its identity?

The biggest guess, hope and request to this has to do with Phantom Manor’s story and how it is told. “What IS Phantom Manor’s story, anyway?”, some of you may be asking. The attraction certainly doesn’t make it easy to follow or directly answer questions raised, and many have called for more clarity to be brought to the forefront with this new refurbishment. I however am strictly against this sort of change coming to the attraction. Yes, Phantom Manor’s story is one filled with ambiguity and mystery – but that is the point.

One concurrent trait you will find in so many different attractions, shows and experiences created by Walt Disney Imagineering is the source of inspiration for them. In many cases not only will Disney material of course be used but so too with other forms of popular culture. Perhaps most interesting though is when cases real events, history and folklore are used to help shape a magical story within the Disney gates. With its Psycho-esque exterior and Phantom of the Opera tone, it’s very clear the former was heavily used in bringing Yale Gracey’s biggest legacy to Europe. But what about the latter? Were real haunted houses and ghost stories taken as examples during the drawing board stages of Phantom Manor?

Let’s first look at what are the most common trends and regularities when confronted with a location of the paranormal. Though I have never purposefully visited a haunted house or location, I’ve seen enough ghost hunting shows and read enough stories to see the same things come up again and again. There is always a tall tale, usually passed down several times to become legend told by the many. Each with their own little differences one way or another. It is usually the scene of a murder where culprit or motive is unclear – something to leave a spirit restless within the walls of the house. And without fail, there is always the unexpected. The feeling for those entering that they have no clue what they’re in for. That anything could happen and, depending on the show, normally does.

Like the concealed tomb within Boot Hill, this is beat for beat Phantom Manor. An urban legend of a story with a variety of versions and differences sounds to me a lot like the many interpretations of the attraction’s plot told by cast members and fans over the years. Everybody has their own version based on what they’ve heard, read and seen for themselves. This rhymes perfectly with 99% of real ghost stories out their in real life. Chances are visiting these locations or talking to people familiar with them and you’ll hear the same tale told several different ways.

This level of ambiguity is what has entralled us in ghost stories and haunted houses for centuries. The mystery of what really happened and the prospect that maybe YOU will be the one to find out for sure. This device is used just the same with Phantom Manor even before you are near the attraction. The decrepit house on a hill. It’s a visual device so tried and tested it should be cliche to our subconscious, but it works. We’re immediately drawn towards it to see what it is. A 101 in good weenie design.

As you move forward, through the queue and into the attraction itself the mystery only thickens. The eerie music, the sudden opening of the front door and – of course – the stretch room. They’re all designed to leave you dazed and confused, wondering what this manor is and what has become of it?

Into the attraction itself, and the core part of the story, there is little narrative handholding which is exactly how it should be. Returning to my example of visiting an actual haunted house, you wouldn’t be given a room by room explanation of the turn of events that made the location infamous. You wouldn’t be informed why you swear you saw that lamp move, or given an explanation regarding that creaking sound you hear.

Phantom Manor is a story built around legends, from the Thunder Bird and it’s supposed reckoning, to Henry Ravenswood rumoured fury over his son-in-law to be. Everything we know about the inside of those walls is told from the point of view of the Thunder Mesa residents. We are witness to a tall tale told by witnesses. Therefore it makes perfect sense that the Manor itself isn’t going to instantly share its secrets with whoever walks through its doors. Doing so would completely twist and deflate the atmosphere Imagineers painstaking put into the attraction to make a darker, fresh take on the classic Haunted Mansion formula. A thrilling journey fueled by mystery.