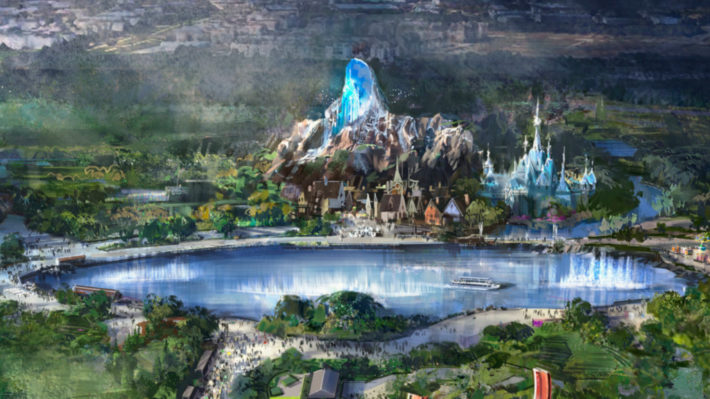 The brand new lake that is set to be the centerpiece of the Walt Disney Studios Park expansion will be complete by 2022, a new development permit has revealed.

Originaly revealed back in 2018, the lake will be the new heart of Walt Disney Studios Park and part of the massive €2 billion expansion to the Disneyland Paris second gate.

Along with this impressive new man-made aquatic structure, the lake will be surrounded with two new lands dedicated to Frozen and Star Wars. Land will also be set aside to allow future expansion.

Similarly to that of the one in Disney California Adventure, the new lake will help create an identity within the Studios park and become an area now just to navigate to other lands but somewhere guests will want to stay in. Previously announced was a restaurant will be situated on the bank of the lake, possibly giving stunning views onto the new scenic area as well as for future shows that will no doubtedly take place on it.

Unfortunately, the newly released plans also confirm that boat based navigation on the lake will not be coming upon opening. Despite appearing in old concept art it appears that this idea had been scrapped.

Work of course is already well underway on the Walt Disney Studios Park expansion, with Avengers Campus set to be the first phase to be complete. The brand new land which will replace Backlot is set to include a retheme of Rock ‘n’ Roller Coaster and an interaction Spider-Man attraction. The latter of which recently saw construction go vertical ahead of a 2021 opening.

With news of the Walt Disney Studios Park lake opening just a year later, it can be expected visible work will commence soon. It has already been announced that key sections of Studio Tram Tour will be removed to make way for the lake, as that attraction itself is rethemed into Cars Route 66.

Are you excited for the new lake that will be coming to Walt Disney Studios Park? What element of the €2 billion expansion are you most excited for? I’d love to hear your thoughts so be sure to let me know over on Twitter!