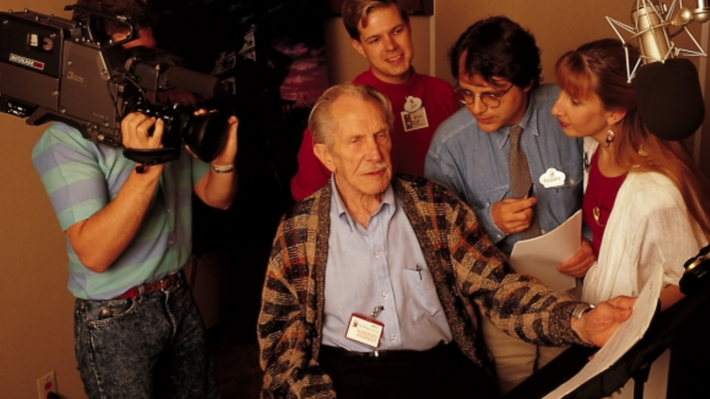 “Where hinges creak in doorless chambers. Where strange and frighting sounds echo through the halls. Where candlelights flicker though the air is deathly still. This is Phantom Manor.”

If you are a fan of the Disneyland Paris classic, then there was only one way you read that quote. The unmistakable, chilling voice from the late, great, Vincent Price. Known best for his work in the Hammer House of Horror films, Price’s foreboding vocals became his strongest asset landing him countless roles and ejecting him into horror movie legendary status. Chances are, you will certainly recoginse his voice – along with that trademark laugh – in the video to Michael Jackson’s ‘Thriller’.

In the early 90’s during Disneyland Paris’, and Phantom Manor’s, early years, Vincent Price’s booming voice rang through the foyer, stretch room and loading queue of the attraction. Guests entering Ravenswood Manor would be welcomed by the terrifying, mysterious voice of the Phantom as the cloaked figure guided them towards their doombuggy and into a story of love, murder and doom. A role only fit for the very best at scaring in the business.

Unfortunately, it wasn’t long until things changed. Not long after Price’s unfortunate passing so too did his dialogue from Phantom Manor. Though the content stayed, the Phantom now spoke French. Interestingly enough however the role of the new voice went to a Gérard Chevalier, a name best known in French cinemas for dubbing a number of Vincent Price’s roles. At least the best man for the job was selected.

For two decades, this was how Ravenswood Manor operated. Only Price’s iconic laugh remained in several scenes in the attraction, and despite plea after plea from the fans, this was not to change. Fate it seemed had condemned this legendary spiel to the confines of shared audio files.

But then, when did anything stop the Phantom…?

At the Inaugural Party to Disney FanDaze, Imagineer and Disney Legend Tom Fitzgerald announced that yes, Vincent Price’s stunning recording will return to the Manor when the attraction reopens from its current lengthy refurbishment in October.

“There is some legacy to this attraction that we#re gonna bring back,”said Fitzgerald.

This followed as the Imagineer played some of that opening dialogue from the start of this article, before eruption. The entire crowd broke into applause, each and every one knowing what this was. And how long we’ve called for this moment.

I’ve been told my face was quite the picture when we were shared this piece of news, and I can well believe it. I have long been one of the biggest supporters for the return of Vincent Price in Phantom Manor ever since I first discovered it’s existence who knows how many years ago. It has forever been my one wish for the attraction I love more than any other. The only thing lacking in perfection.

It is very important to note however, a full swap back to the original recordings were not confirmed. Tom Fitzgerald noted how “when we bring Phantom Manor back you will see how we found a way to bring some of that original into the show.” What this will actually mean for Phantom Manor remains to be seen. Perhaps only parts of the spiel will be used in specific parts to help tell the story of the Frontierland favourite, or we will see this become the third attraction in Disneyland Paris to get Cast Member controlled language selection like that of The Twilight Zone Tower of Terror and Star Tours: The Adventure Continues.

Whatever they do choose however, one thing is certain. The attraction is going to shine in a whole new light because of it, and my grim grinning heart couldn’t be happier for it.