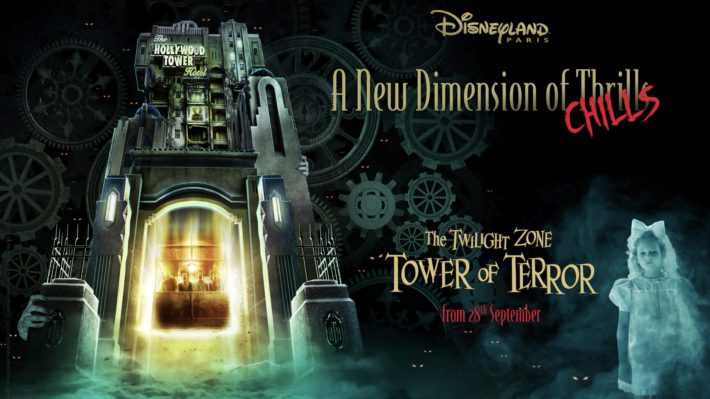 The Twilight Zone Tower of Terror – A New Dimension of Chills is now opened at Disneyland Paris, bringing a new twist to the classic Walt Disney Studios Park E-Ticket.

Along with the new subtitle, this refreshed version of the attraction will see updated effects, new story elements and alternative drop sequences depending on which elevator guests enter.

Additionally, each elevator will now contain their own unique story. Though still tied to The Twilight Zone and the classic tale of the Hollywood Tower Hotel, what happens once guests recreate that stormy night long ago will now be unique from three scenarios.

The little ghost girl haunts this elevator. But she is the least of your worries. Because as soon as you take your seat, this malevolent machine only has one thing in mind – to trap you, and clank and screech with glee as it catapults you up and plummets you down at its wicked will without warning. The only thing you can do is hold tight and scream! Will you be able to free yourself from its grip?

“They know you’re here. Whatever you do, don’t scream!” Scary creatures roam around the elevator shaft and are looking for distressed souls to terrorize – as the louder your pleas for mercy, the more powerful they become. Can you stay silent while plummeting – several times – 13 unlucky floors at the speed of fright?

Don’t get lost in this dimension! A sinister Poltergeist specter has opened the 5th dimension and wants to take your soul with it. Prepare to question everything you think is real as you’re dropped into a terrifying psychedelic journey between worlds. Will the little ghost girl be able to take you back to our dimension?

Initially teased during the InsidEars anniversary event, many (including myself!) believed this to be the same randomised drop sequences found in other versions of the Tower of Terror. Instead these are completely new ride shows with accompany sequences, entirely unique to the Parisian Tower.

Guests visiting the resort during the past week may have been able to have caught a special preview of the new attraction update, as one several occasions testing was conducted on one of the elevator shafts in preparation for the full switchover.

Despite launching alongside Halloween, and featuring as an element of the spooktacular season, The Twilight Zone Tower of Terror – A New Dimension of Chills will be a permanent addition to the Walt Disney Studios Park attraction.

Are you excited to check out this brand new twist to The Twilight Zone Tower of Terror? Which of the new stories captures your anticipation the most? There’s no changes here where to find me so be sure to let me know over on Twitter!