Disney has always been a company with some of the finest and most creative minds in the world working together. From those early days of Steamboat Willie and Snow White to the international juggernaut it is today, working for the Mouse is a dream goal to many an imaginative eye with a passion to create. This is very true too in the case of their theme park creatives. Dubbed ‘Imagineers’, these designers and architects are like no others combining imagination with state of the art engineering to create favourites we love like Star Tours, Big Thunder Mountain and Ratatouille.

As ingenius as the great guys and gals of Walt Disney Imagineering are, it is not unheard of for Disney to specifically look for an outside mind to closely watch the development of an idea. George Lucas of course played a very major role (and was the final approval hurdle) in many attractions based on his Star Wars and Indiana Jones – as well as directing the cult favourite Captain Eo. Fewer may be aware that before the Tower of Terror received its famous Twilight Zone theme, an experience spearheaded by comedic legend Al Brooks was considered. This was serious enough too that Brooks met with Disney to discuss ideas.

This is also the case when it came to Imagineers and their involvement on Disneyland Paris, though little is often said on the matter. While names like Tony Baxter, Jeff Burke and Eddie Sotto are on the tips of fans’ tongues when discussing the beloved resort, there is an unsung hero. Someone who – in their own way – has a place in DLP designing history many are unaware of. 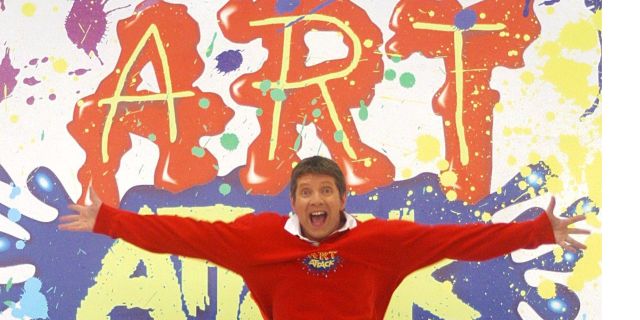 Yes, ‘The Art Attack Man’ himself, Neil Buchanan has worked on a Disneyland Paris attraction! As found on the former presenter’s official website, the resort has a small shout out when mentioning Neil’s inspirations for his iconic work:

In terms of ideas, he believes that Walt Disney was the greatest ideas man that ever lived and was honoured to be asked to design an attraction for the Disneyland theme park in Paris.

How cryptic, but fascinating. The man behind Art Attack and the crazy and unlikely art that inspired me throughout my childhood has worked on something in Disneyland Paris.

Of course, first signs may point towards Art of Disney Animation, with the heavy art influence and oversized paintbrushes that populate the interior – something instantly recognisable and reminiscent of the Art Attack set. Then again, the relic of Walt Disney Studios Park – the old Disney Channel tour – is just as likely. It did once house a working stage and set for the French version of Neil’s show, after all.

I decided that as fun as all this speculating was, Inwanted to know more. Surprisingly I could find nothing about Buchanan’s involvement with Disneyland Paris anywhere online, with exception to that brief mention on his website. The best I could find was reference of the French Art Attack appearing in WDS on a very old and no longer used Disney Channel fan site.

As many of my former school teachers used to tell me; if you don’t know the answer, ask. So that’s what I did. I contacted Neil Buchanan via his website to ask him specifically about his work with Disneyland Paris. I pondered if he could recall what he worked on and if he would be allowed to discuss it. I also brought forth my theory of the Disney Channel tour with the French Art Attack set.

To my amazement, I got a reply:

Your guess is not too wide of the mark regarding the Disneyland Paris attraction. Obviously, I am bound by confidentiality (which I always fully respect as my relationship with Disney has always been exceptional) but what I can say is that I was indeed asked to submit a design for an attraction in the very early days of the park’s conceptualisation. What I can tell you is that when I designed the Art Attack set I always loved the idea of a big creative environment that people could interact with and produce their own masterpieces. My idea was submitted into development and several years later one thing led to another, ideas were refined and developed, directions were re-focused, and Disney eventually created their own studio tour attraction but with an Art Attack presence. Unfortunately, I never got to see it as all of my own further dealings with Disney centred around Burbank and Orlando!

So you were nearly on the right track with your initial guess!

So there you have it! Disneyland Paris did indeed approach Neil Buchanan for ideas on an attraction in the resort, which eventually evolved to become part of the Disney Channel tour in Walt Disney Studios Park. Entirely speculative on my end, Neil’s mention of a creative environment where guests could make their own art to me sounds a lot like the interactive desks you find in Art of Disney Animation’s post show. Perhaps this idea was later used as inspiration for these?

It’s a shame really that Neil never got the opportunity to see the old tour when it was operational. From his words both on his website and my email however he very honoured by the opportunity and thankful for his working relationship with The Walt Disney Company. And so says I!

A big, big thank you to Neil Buchanan for sharing this amazing piece of information with me and – once again – for creating such a big part of my childhood that has no doubt spurred on the creative side of me in later life.

What do you think of this piece of DLP history? Where you aware that the man behind Art Attack worked on an idea in the resort? Do you wish things went a different route and a more Neil inspired attraction appeared? I’d love to hear your thoughts in the comments and on Twitter!