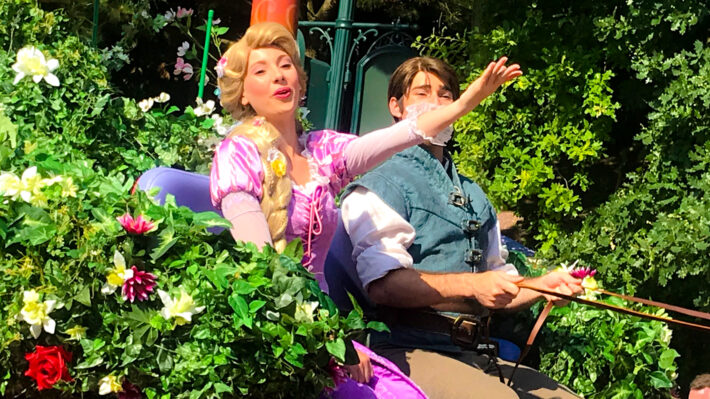 Surprise, miniature daytime parades have appeared on a trial basis in Disneyland Paris, just over a week after the parks welcomed guests back.

The resort officially reopened its gates after a 4 month temporary closure last week. To ensure the resort the upmost safety for both guests and Cast Members many important measures have been set in place including limited capacity, social distancing and the wearing of face masks.

These new regulations and restrictions have been met with wide appraisal from fans and guests in terms of safety and creativity in keeping the parks magical. Something that has been very clearly missing however has been a staple to any Disney park, a daily parade.

Although Disney Stars on Parade has understandably been put on hiatus to avoid crowds gathering, the resort feels the first week back in operation has been successful enough to trial a replacement. These mini happenings will launch at an unspecified time (not listed on the park programme) before running the standard parade route through Main Street U.S.A.

Today saw the first of these surprises which began with the Main Street Omnibus rolling into the land with some very important pals onboard.

Later in the day the lost princess Rapunzel went for an afternoon ride through Disneyland Park atop a royal carriage.

Rapunzel is riding back down to Town Square now ??? pic.twitter.com/IaP9wUAIcq

Things got a little more lively to round off the surprises as Mickey, Minnie and Pluto became members of the Tricycle Gang on the very fun themed vehicles fans will surely recognise. Tagging along for the road trip down Main Street was Stitch, taking the back seat on his Hawaiian Stars ‘n’ Cars mode of transport.

This afternoon, Disney Friends on tricycles are joined by Stitch in his “Stars n’ Cars” vehicle! pic.twitter.com/dTLn7DVaRH

At the time of writing, it is unknown if more princesses, characters and parade floats will feature in these random small happenings. Indeed as times will not be published on any park programme, they are designed more to be miniature surprises for guests who just so happen to be along the parade route at the time, rather than a main event to hang around to see.

These mini daytime parades are the first form of entertainment to return to Disneyland Paris since reopening but will certainly not be the last for the summer. The two most popular features of last year’s summer season, The Lion King: Rhythms of the Pride Lands and The Jungle Book Jive have been confirmed to return on the 15th & 22nd August. While the stage show Rhythms will return to Frontierland Theater, Mickey, King Louie and co will be taking the Jive over to Walt Disney Studios Park and the Moteurs… Action! Stunt Show location.

Be sure to follow me over on Twitter for any more surprises and mini daytime parades that may happen as Disneyland Paris continues the reopening celebrations this summer.