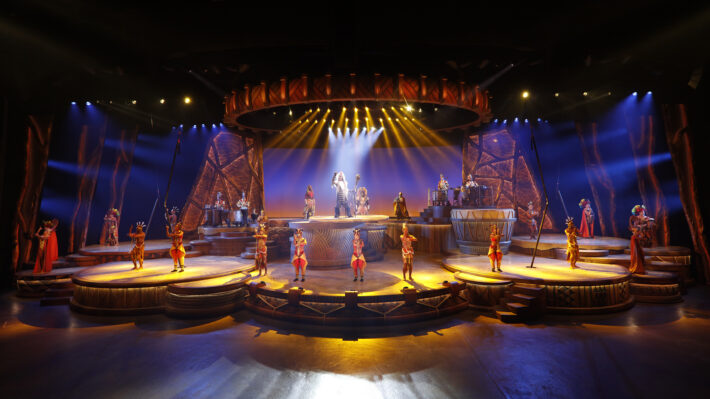 The Lion King: Rhythms of the Pride Lands has returned to Frontierland Theater and Disneyland Paris for another season of visually stunning musical fun, with social distancing in place to ensure safe viewing for guests.

Debuting last year as the flagship show of The Lion King & Jungle Festival, Rhythms of the Pride Lands is a choreographed musical celebration of the 1994 classic The Lion King. The show has taken inspiration from both the animated original and the Broadway show to re-tell the iconic story in a true spectacle and unique way with amazing costume designs, acrobatics and kinetic sets.

It was announced prior to Disneyland Paris’ re-opening that the hit show would return later in the Summer and once again will find a home in the renovated Frontierland Theater. After a short soft-opening yesterday guests can now officially relive the action of The Lion King once again, with social distancing in mind.

Guests are informed when entering the theater to leave a minimum of one seat empty between them and others not in their party. Rather peculiarly, seating rows are not being left out when distancing guests from one another. This is rather odd as attractions all throughout Disneyland Paris have practiced this method of social distancing.

Additionally, in order to see the show guests must first reserve their seat via the digital queuing app Lineberty. Regular guests to DLP will be more than familiar with the app by now but new guests can download it via the App Store and Google Play Store.

🦁 Guests have to leave two spaces between each party in the Frontierland Theater but they don’t have to skip rows. pic.twitter.com/c2QsfB99wq

The Lion King: Rhythms of the Pride Land is the first of two fan favourite shows set to return this month, both originating from The Lion King & Jungle Festival. Next week Mickey, Minnie, Goofy and friends will be joining the likes of King Louie and Baloo for the return of The Jungle Book Jive.

To ensure appropriate social distancing can be performed (and as not to clog up Central Plaza during this time) the show will instead perform at the Moteurs… Action! Stunt Show location. Guests will be able to once again journey to India with their Disney pals from 22nd August.