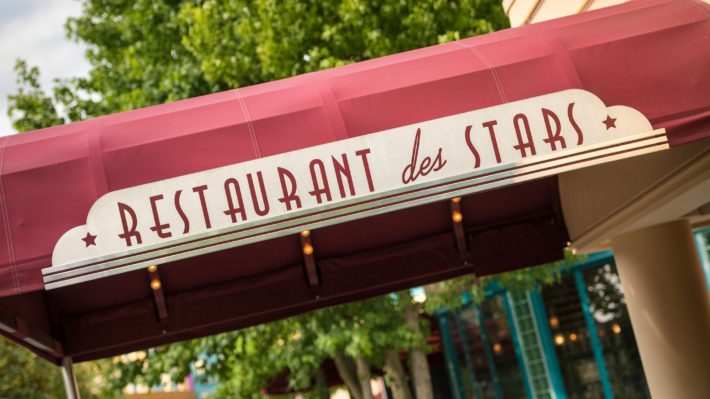 Restaurant des Stars will very soon see its doors close for good before it is re-themed into an Ant-Man based outlet.

DLP Reports has discovered that reservations for the all you can eat buffet are set to end after 5th January 2020, with the location listed as closed thereafter.

This will mark the fourth and final element of the pre-existing Backlot to permanently close in order to transform the area in Avengers Campus, a brand new land dedicated to the Marvel universe. Earlier this year saw the likes of Rock ‘n’ Roller Coaster, Armageddon and Blockbuster Café face the axe. News of Restaurant des Stars eminent fate will at last complete the Infinity Gauntlet of change for the far side of Walt Disney Studios Park.

Although yet to be officially revealed, investigation work has already indicated what is next planned for the prime real estate within the land. Public plans already revealed that the conjoined buildings that once made up the two Backlot eateries will keep their core purposes, labelled as “Restaurants”.

As for the theme, a closer inspection on the first piece of concept art for Avengers Campus could clearly identify several PYM Technologies logos on the Restaurant des Stars building. The science organisation within the Marvel comics and MCU is synonymous with heroes Ant-Man and the Wasp, creating the shrinking technology Pym Particles.

Indeed, attendees of the 2019 D23 Expo may got a first glimpse at some of the inspiration towards the future PYM Technologies without knowing it. Known as Pym Test Kitchen the attraction has already been confirmed for Avengers Campus at Disney California Adventure. Although by no means confirmation that Disneyland Paris’ will be an exact clone of this, the fact both parks will share the interactive Spider-Man attraction does make the possibility likely.

Did you ever eat in Restaurant des Stars? Are you sad to see another opening day part of Walt Disney Studios Park leave or are you excited for Avengers Campus and the PYM Technologies restaurant? I’d love to hear your thoughts so be sure to let me know over on Twitter!