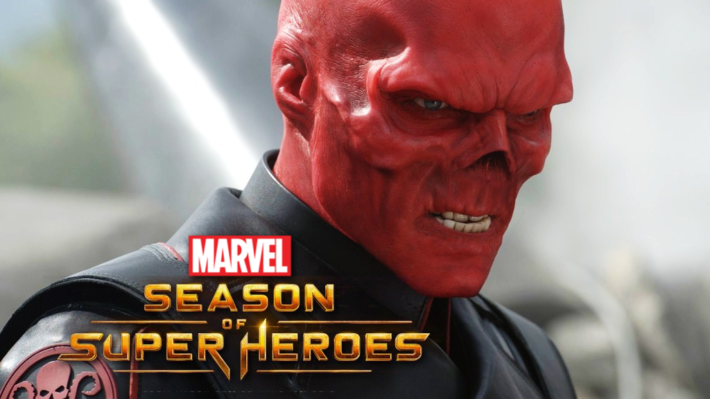 Marvel Season of Super Heroes has added another iconic comic book character to its roster in the form of Johann Schmidt aka the Red Skull.

Best known as the arch-nemesis to Captain America, Red Skull is a comic book juggernaut and one of the most well known villains of the entire Marvel universe. Many will recognise him as the main antagonist and head of Hydra in 2011’s Captain America: The First Avenger along with a brief but memorable appearance in Avengers: Infinity War.

This marks the third announcement of new characters joining the ranks of Marvel Season of Super Heroes for 2019. Earlier this year saw the reveals that Groot and Captain Marvel would join a roster already consisting of many Avengers and Guardians including Iron Man, Captain America, Black Panther and Star-Lord.

Perhaps most interestingly, Red Skulls descent upon Disneyland Paris will mark only his second appearance on Disney property. The first of which was during on the Disney Cruise Line as part of Marvel Day at Sea.

From a Marvel fan’s point of view this is just another great announcement for the Season of Super Heroes! The Red Skull has long been a fan favourite (myself included) so to finally see him make an appearance in Disneyland Paris, hopefully doing battle against his arch foe Cap, will be a sight to behold for fans of both the movies and comic books.

This also adds another villain to the Marvel lineup at Walt Disney Studios Park which is never a bad thing. Red Skull’s appearance will bring the antagonist rota up to 4, joining Thanos, Loki and Nebula already making waves of destruction last summer.

Though no indication has yet been given how and where Red Skull will appear in the new Marvel season, my best guesses lie towards an updated Super Heroes United. Last year’s show of course had the origin scene depicting Steve Rogers transformation into his Captain America alter-ego. I certainly wouldn’t rule out this being changed or extended to include a stand-off between the two super-powered rivals. Perhaps in the same vein as their first encounter in The First Avenger?

Are you excited of the prospect of seeing the Red Skull at Disneyland Paris this summer? Are you planning to visit again when Earth’s Mightiest Heroes return for Marvel Season of Super Heroes? I’d love to hear your thoughts so be sure to send them my way over on Twitter!