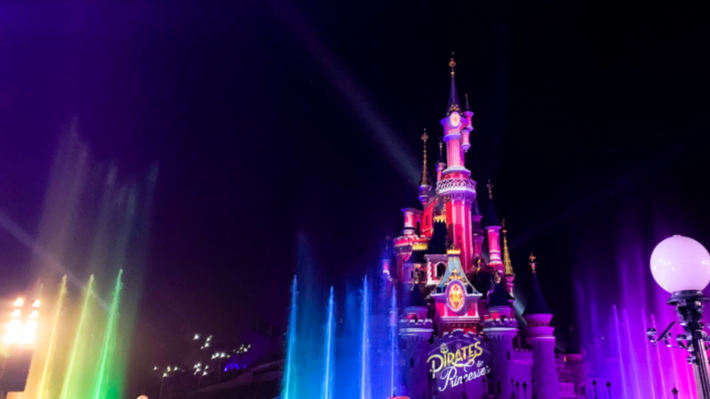 From its launch in the spring of 2018 and Winter return this year, the Festival of Pirates & Princesses has been the runaway success story nobody saw coming. The season captured the hearts of Disneyland Paris fans so much it seemed inevitable that a dedicated Annual Pass night would happen.

Announced directly after the Mickey 90 Mouse Party, the Pirates & Princesses AP Night is the fifth edition of these exclusive after hours events. Although the majority of these nights are limited to Infinity passholders only, the P&P night was available for Magic Plus Annual passholders too.

Now five events in with an almost even split between Disneyland Park and Walt Disney Studios Park it is clear that progress has been made and improvements with every event. As with event hard ticket party it is impossible to do everything that is on offer but I was able experience enough to give my own views on the night itself. 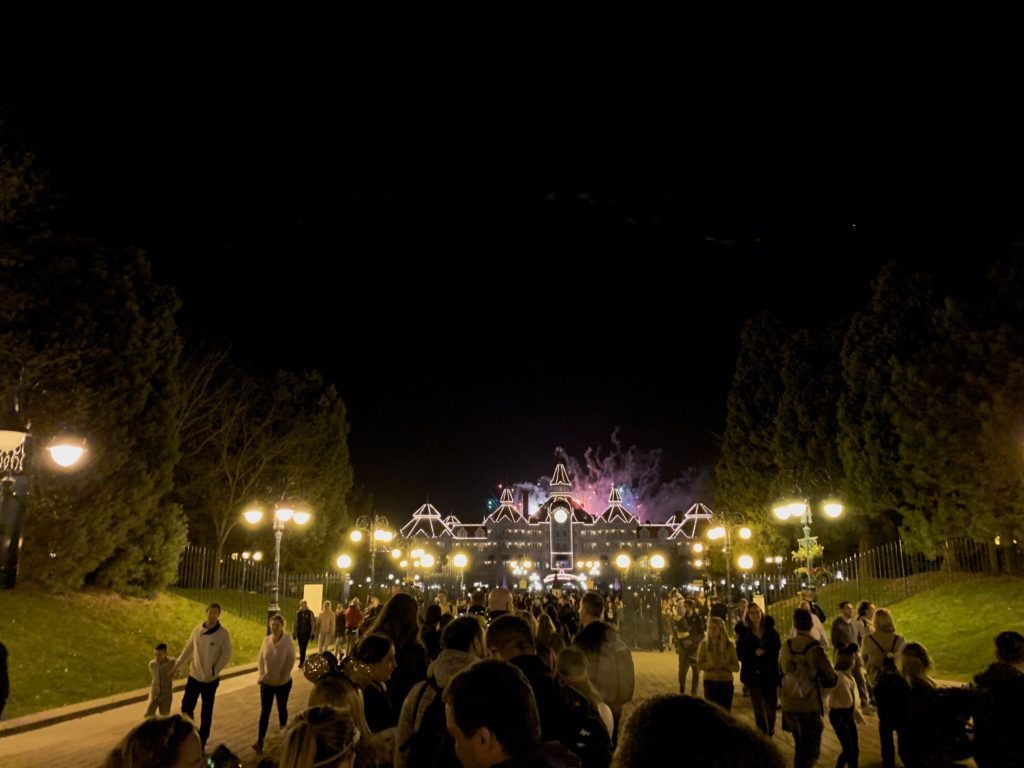 Kicking off any Disneyland Paris event, before that of any actual festivities connected to it, is of course the process of entry. Back in December I had several issues with the opening operation of the Mickey 90 Mouse Party annual pass night but was confident that these problems could be ironed out for future nights held in Disneyland Park. If anything, the situation was only worse for the Pirates & Princesses Annual Pass party.

With park closing at 8pm with the AP event commencing just an hour later, it was decided that the best solution would be to empty out the park before then allowing those with valid tickets entry at 9pm. This may seem like a straightforward approach in theory, but when put into practice it lead to extremely long waits, the majority of which having virtual no movement which turned Fantasia Gardens into a confusing bottleneck.

From what I had gathered, the idea was to gradually allow small groups advance from the Disneyland Hotel entrance area towards the turnstiles which, again, proved to be a lot better on paper than in reality. Indeed, by the time I had finally made it to the park turnstiles some 20 minutes after the party had already begun, many of the turnstiles were not even switched on.

Much like my criticisms from the previous Disneyland Park held AP night, I understand that we are still in the early stages of these parties and so teething problems should be expected. What I fail to grasp however is when the “main park” is able to handle the switch over from normal operations to private event seamlessly with an armband strategy seen at both Halloween and New Year’s Eve, why this isn’t adopted for Annual Pass parties? 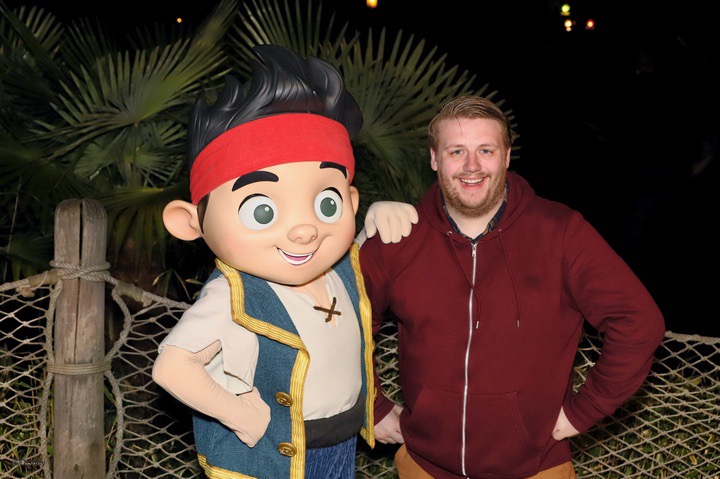 As made evident when the schedule for the night was announced, the Pirates & Princesses Annual Pass party featured an impressive 30 characters to meet. All of which loyal to the side of either Pirates or Princesses in the night’s last battle throughout Disneyland Park.

Much like every other private event that has come before it, character meeting was a finely tuned art were the first rule to a good night is accepting you won’t meet everybody. The level of crowds these events gather make getting to your favourites first is a must with anyone else you’re able to stumble upon a bonus.

As someone who doesn’t regard themselves as a “character person” I was very happy with the two meets I was able to get in during my evening; both of which representing Team Pirates. Fans of the hidden gem Treasure Planet were able to find protagonist Jim Hawkins over at Arcade Beta in Videopolis, while in the depths of Adventureland I discovered Jake the Neverland Pirate entertaining a surprisingly quiet queue. 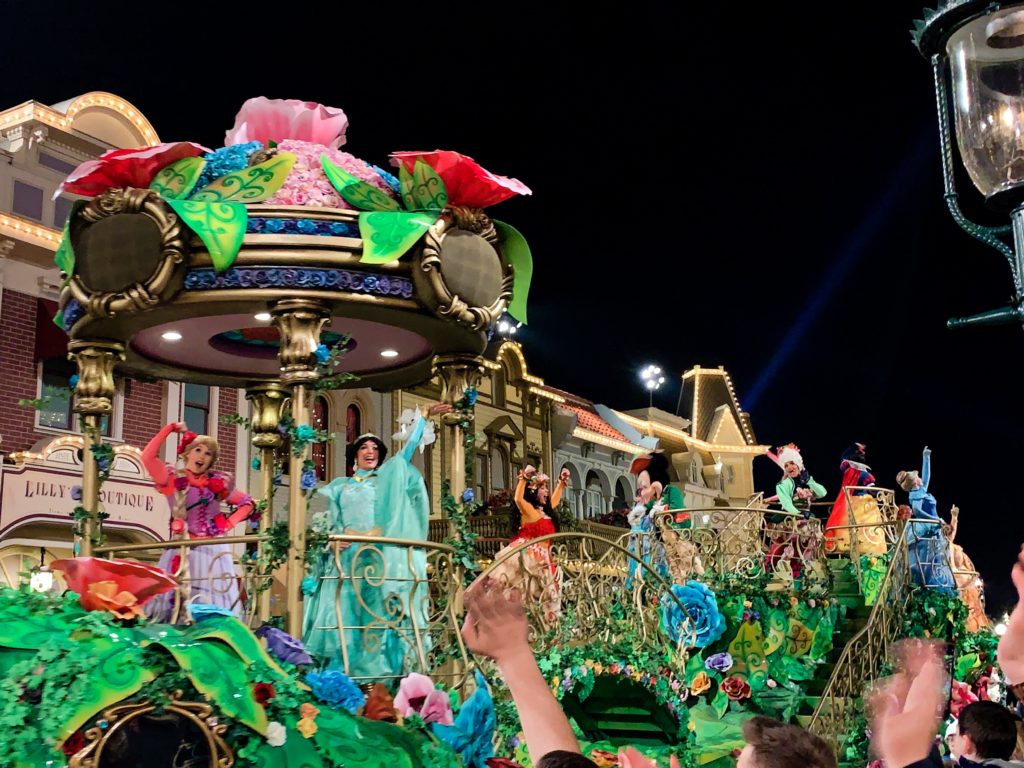 Although character meets were, as typically, the major pull of the Pirates & Princesses Annual Pass party, there were also several pieces of entertainment on offer throughout the evening. The two sides were both eager for new support as entertainment for respective teams took over several parts of Main Street U.S.A., Fantasyland and Discoveryland in the form of fan favourites.

On the Team Princess side of things the Starlit Princess Waltz of 25th anniversary fame saw a triumphant return to its faithful, with the Betty Rose lead show stop of the regular season making one last hurrah on Main Street.

Having at last witnessing the euphoria, energy and fun this segment of Pirates & Princesses brings I can finally say I get it. I understand the love this season gets. The upbeat, fun and partyesque music, the bright colours and vibrant float makeover and the masses of energy from the flurry of Disney Princesses was enough to completely win over this skeptic who wasn’t sure what to expect.

Even as someone with just a vague familiarity with the song lyrics I was singing along as best I could to the buzzing, catchy beat. It’s just unfortunate I was unable to witness the Team Pirates side of things. Tht was more than made up for however over in Discoveryland. 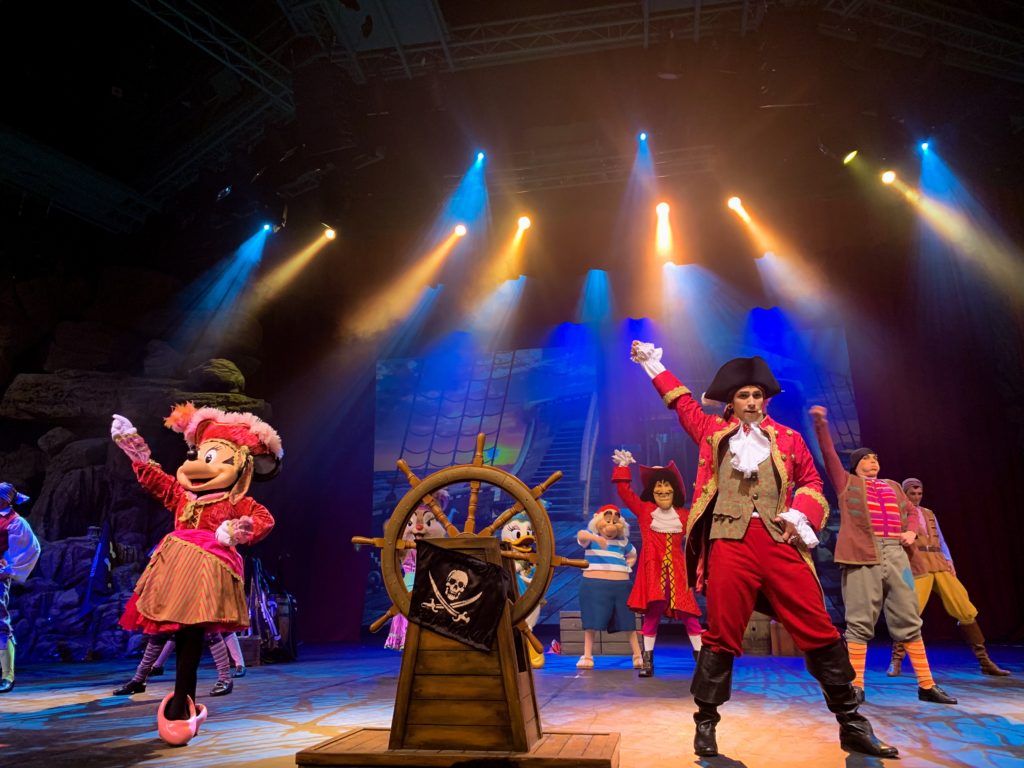 Once upon a time Minnie’s Pirate Academy was a staple entertainment piece of the Halloween parties at Disneyland Paris. After a four year absence the show was revived in a new venue at Videopolis stage for one night only at the Pirates & Princesses AP night, bringing a whole new audience to the step by step process of becoming a real pirate.

What an incredible fun show this is. While experienced pirates fond of the show such as myself knew exactly what they were getting themselves in for, new recruits found a lively, energetic and interaction heavy blast of fun perfectly fitting with the Pirates & Princesses theme. Hosting in the smaller, indoor stage compared to the castle venue of old allowed a much closer knit environment which only amplified the energy the show exhumes.

Minnie’s Pirate Academy has always been a favourite of mine ever since I first discovered it one Halloween night many years ago. Seeing it back in the limelight and all of its party silliness was the true highlight of the entire night for me. Indeed I believe the show is so good it could have very easily had permanent residency in Videopolis during the Pirates & Princesses season. Perhaps one to consider should a 2020 festival becomes a reality? 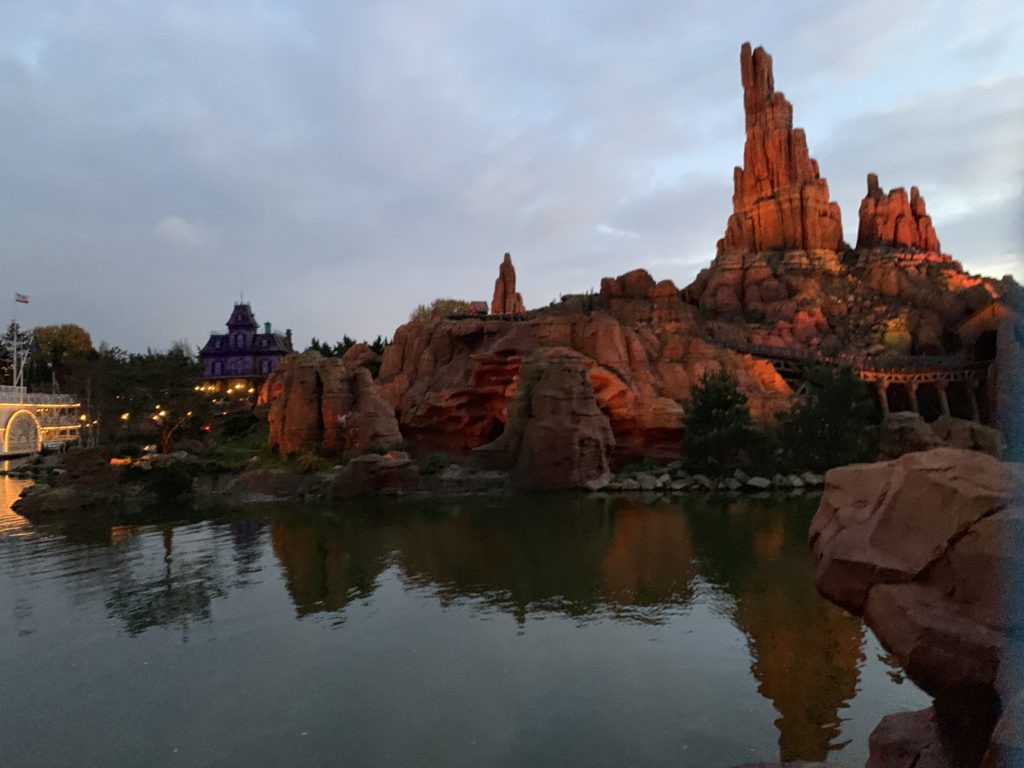 With all the characters, shows and entertainment on offer during the Pirates & Princesses Annual Pass party, you would be forgiven to forget attractions were also open during the event. Indeed, this iteration of the exclusive AP night saw by far the largest number of attractions available for guests to enjoy. A whopping 11 attractions were opened throughout the event including Man York E-Tickets like Pirates of the Caribbean, Peter Pan’s Flight and Hyperspace Mountain.

If, like me, you see yourself primarily as a Disney Parks attractions fan then this AP night was definitely the one for you. With all attention of the evening elsewhere in Disneyland Park virtually every attraction was next to empty. Even the queue monster that is Big Thunder Mountain I was able to walk on with no line whatsoever. This makes these nights the perfect time to enjoy all your favourite E-Tickets and thrill rides hassle free and as many times as you so desire. Even ignore a particular theme of an AP night doesn’t suit you, this alone should be a pull for the attraction lovers. 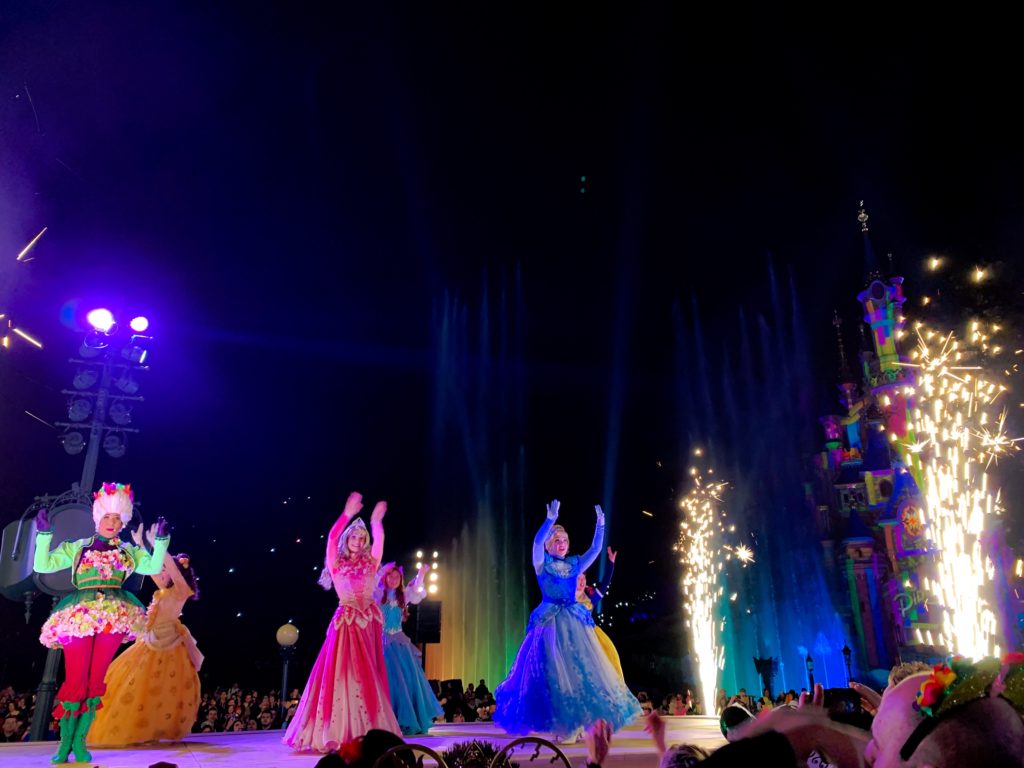 Bringing the entire party to a close in spectacular fashion was one final rendition of Pirates & Princesses: Make Your Choice! Possibly one of the biggest cult favourite shows in Disneyland Paris history, the only noticeable different the Annual Pass night’s version contained was the use of pyrotechnics and castle projections.

Though that may sound disappointing to some of the Team Pirates and Team Princesses faithful, as someone who’s first ever experience of the show was at this event I feel I got the best ever introduction to the runaway hit. As many has already expressed the show from start the finish is upbeat, catchy and full of energetic fun. Add to that the fantastic atmosphere witnessing this grand finale among the hardcore fans of the season and I couldn’t help but sing and dance along.

The Pirates & Princesses Annual Pass Party was seen by many as the big finale to another successful outing of the season. While it’s future is currently unknown (no confirmation of a 2020 edition has been announced) its fair to say fan demand for more is there; and with good reason.

Experiencing the season for the first time at the AP night may have meant I’m the last one to jump on the fan wagon, but I happily sit there. All the offerings of the evening where fun, energetic and kept you smiling and dancing all the way until the early hours.

There may have been something issues with crowd entry, but nothing I believe cannot be resolved with a revised approach. After the fun of Mickey 90 and the party of Pirates & Princesses, Disneyland Paris are starting to find their feet with these Annual Pass nights.

Where you at the Pirates & Princesses Annual Pass Party? What was your highlight of the night or has reading and seeing all inspired you to attend a future AP event? I’d love to hear your thoughts so be sure to let me know over on Twitter!