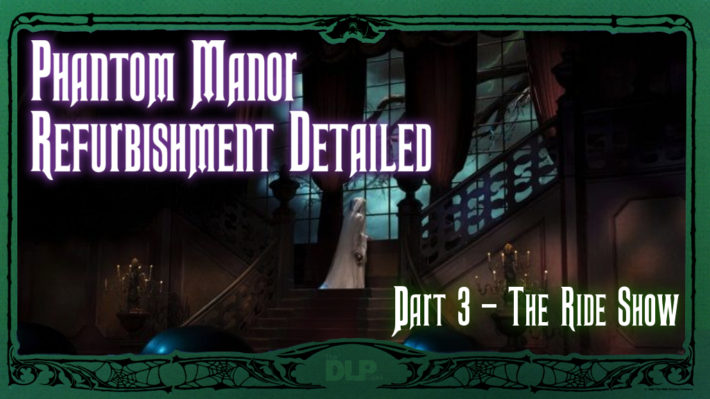 We have already ventured through the queue and entered the mysterious Ravenswood Manor, but now it is time for our tour. In this part take a seat in your Doombuggy as I take you on a journey through the Phantom Manor ride experience.

NEW – Melanie at the grand staircase 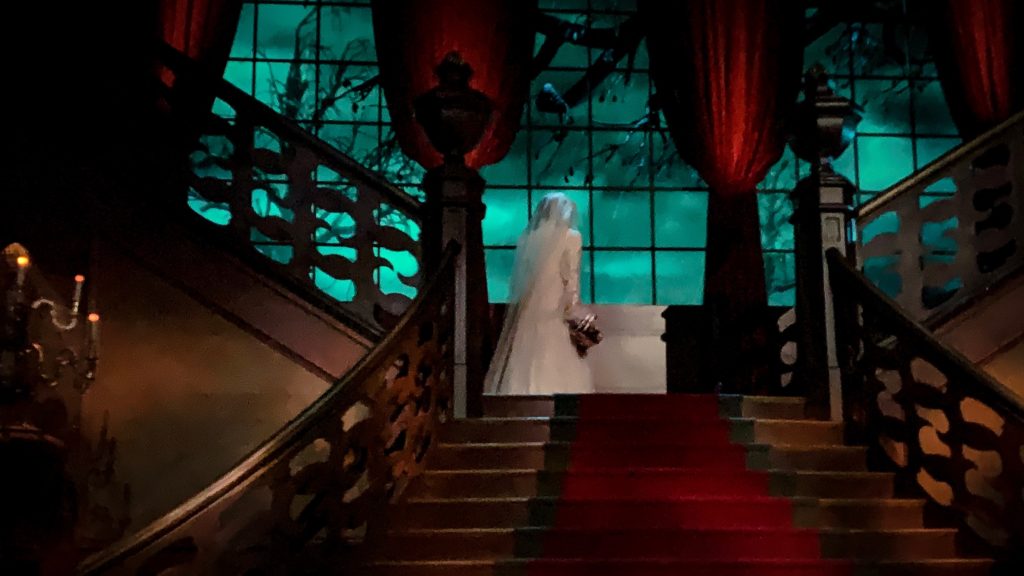 Beginning your journey through Phantom Manor and thus the start of the ride show, Melanie can now be seen from the top of the stairs. Dressed in her iconic wedding gown, she is seen looking out the window and on towards the stormy night.

The lighting for this entire scene has been improved to help give a more foreboding atmosphere. New effects are used to help simulate the sound and presence of rainfall against the large windows and wind has been introduced to give Melanie’s dress and ghostly movement.

CHANGE – Melanie In the hall replaced with suit of armour

The first scene guests are faced with in the ride portion of Phantom Manor was of course the introduction to Melanie. Our bride would stand before the moving Doombuggy, candelabra in hand as we begin her tragic tale.

With the character’s first appearance now moved to the grand staircase, so too has her placement in opening part. In her place now is a full suit of armour, standing proud until it slowly begins to jerk forward as guests approach it.

Fun fact – This new scene is a reference to the 1969 original Haunted Mansion. For the first few months of operation, a suit of armour (played by a real life performer!) would lurk through the opening parts of the attraction to give guests a scare.

An iconic scene tonally perfect to Phantom Manor, the endless corridor blends the mystery and paranormal as our bridal protagonist phases in an out of materialisation right before us. All while the hallway she stands in seeming goes on eternally.

With the refurbishment, the sinister Phantom has now been added to the scene. Found creeping up behind Melanie as she appears, he once again sports new glowing red eyes as mentioned in the previous part.

Taking a left turn and proceeding backwards through the Manor, a memorable scene has always been the dark, ominous piano playing at a glance by no one. As the trademark raven squawks out a shadow can be seen on the ground, revealing a restless spirit at the seat of piano in the dark, eerie room.

In this revised version of the scene, the lighting has been completely changed and brightened to give more visibility to the surroundings. Although this addition of light is in the form of a green hue that dominates the scene.

This isn’t the only change to alter the overal tone of the set piece. The foreboding, unsettling tune from the piano has been replaced with a lighter, more Haunted Mansion-like medley. The shadow belonging to the music’s performer has also been updated with more movement.

Lastly, a look out of the large windows reveal updates to the weather effects of beyond Phantom Manor. Wind and rain is much more noticeable against the glass.

Moving onto the corridor of doors, several new sound effects have been included post-Phantom Manor Refurbishment to accompany the beating and thumping always found in the scene.

Screams, groans and even laughter can now be heard as your Doombuggy narrowly avoids encounters with those looking to break free from their hinged confinements. The famous grandfather clock which strikes ‘13’ has also been updated to an exact copy of the one available to purchase throughout Disneyland Paris. 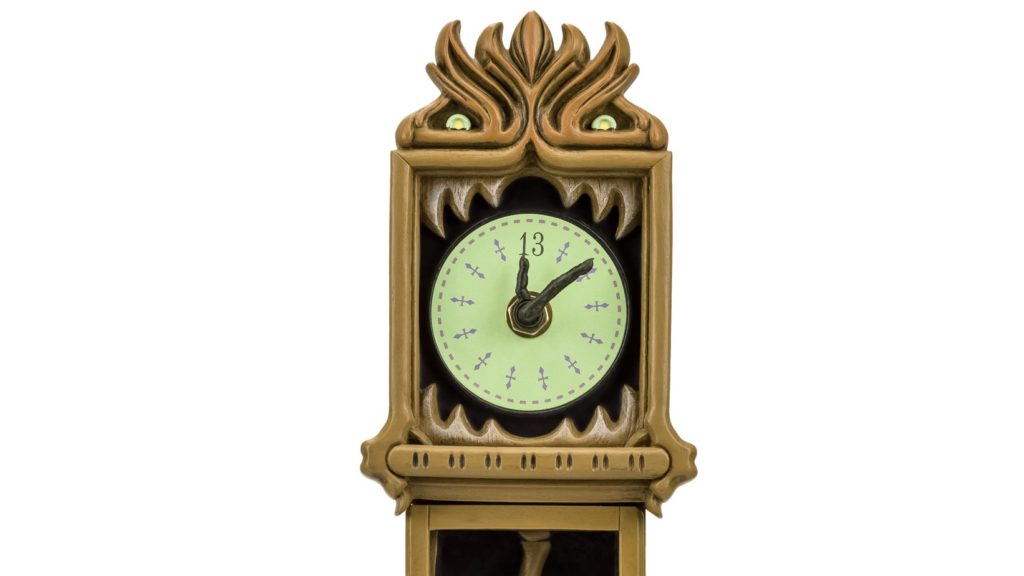 One of the most iconic scenes of Phantom Manor, ripped straight from its older cousins across the pond, is of course the seance with Madame Leota. The scene has received a total lighting overhaul which sees it become much darker than it was prior to the 2018 closure. The decrease in lighting has also been met with more prominent greens and purples, particularly in the windows, curtains and the seance table itself.

To call Madame Leota a staple to Phantom Manor would be an understatement. The mysterious mystic who summons “goblins and ghoulies” to “dance through the night” is one of the main characters guests will recall when thinking of the attraction. Indeed, she is the only named character who can boast the honour of appearing in Phantom Manor, all Haunted Mansions and the 2003 Eddie Murphy movie based on the attraction.

For the refurbishment, Leota has once again been given an updated look bringing her once again up with the latest technology. This is now the third iteration of the character’s face, though her iconic English and French spiel remains untouched.

CHANGE – Phantom’s location in the ballroom

Perhaps the highlight of the attraction, the ballroom at Phantom Manor has often been seen as the ultimate scene. Perfectly conveying the darker story, horror elements and marriage of visual narrative with a dramatic soundtrack.

The antagonistic Phantom has been moved from his famous spot on the windowsill – despite his laughter and lighting strike remaining. Post-refurbishments, he can now be found stood directly behind Melanie who is seemingly oblivious to his presence.

Much like the aforementioned piano room and seance, lighting has also been altered here introducing much more green into the iconic set.

One change that was very clear and apparent upon Phantom Manor’s reopening was the soundtrack found within the ballroom scene. During the relaunch event (as well as during soft opening) the original medley was replaced with an exact version of The Haunted Mansion medley found in Disneyland and Magic Kingdom.

After substantial fan backlash to this alteration, on reopening day of 3rd May the soundtrack in the ballroom was reverted back to John Debney’s iconic piece.

Gliding from the ballroom and into Melanie’s boudoir another change can be found. The large mirror the distraught bride is sat at no longer reflects the skull it once did. Now, along with her own reflection, Melanie will see the image of the Phantom behind her. Laughter can also be heard with each short materialisation.

Fun fact – The former basis of the Bride’s Boudoir scene was a reference to Charles Allan Gilbert’s 1892 “All is Vanity.” The piece depicts a Victorian lady sat in front of a mirror which from the angle of the viewer appears as a skull.

One of the many unique pieces of Phantom Manor, the graveyard scene is perhaps mostly remember for the appearances of a viscous, growling dog next to an open grave.

With the Phantom Manor refurbishment complete, we discover that the canine has been slightly changed in appearance for this new version of the attraction. The glowing red eyes of old have been changed in colour to green while an peculiar new lump can be seen on its back. It is unclear what significance, if any, the latter has on the character.

Moving along and down to the depths, the catacombs and singing busts have been left relatively at bay aside from the obvious refurbishment fixes. As the Doombuggy’s proceed into the final set piece – Phantom Canyon – guests are welcomed into the biggest changes in the attraction’s final scenes.

The townsfolk of Phantom Canyon have all received face updates and their appearance altered heavily. Now the gunslingers, saloon dancers, chemists and alike sport green faces perhaps to further emphasis their undead status.

As the attraction’s big finale, guests come face to face with the Phantom himself, his appearance greatly changed. Ripped clothing, decaying flesh and hat-less this last incarnation of the menacing villain torments passers by with a makeshift coffin by his side. Your fate within the walls of Phantom Manor sealed?

Today however the Phantom has been completely replaced and now dons an appearance exact to what’s seen elsewhere in the attraction. Additionally, the coffin appears much newer and in mint condition, with a noose clearly visible beside Phantom Manor’s main haunt.

In the original Phantom Manor, the evil Phantom’s attempt to make you the 1000th ghost of the cursed estate is thwart by none other than Melanie herself. Appearing at the last moment to a blinding light, the bride sacrifices herself to spare the soul of you the guest, pointing your way out as her body turns to bone and wedding gown decays.

Although this scene was slightly changed from a blinding white light to a dimmer green several years ago, that was the only alteration prior to this refurb. Now however the scene has been completely removed.

NEW – Crypt of the four suitors 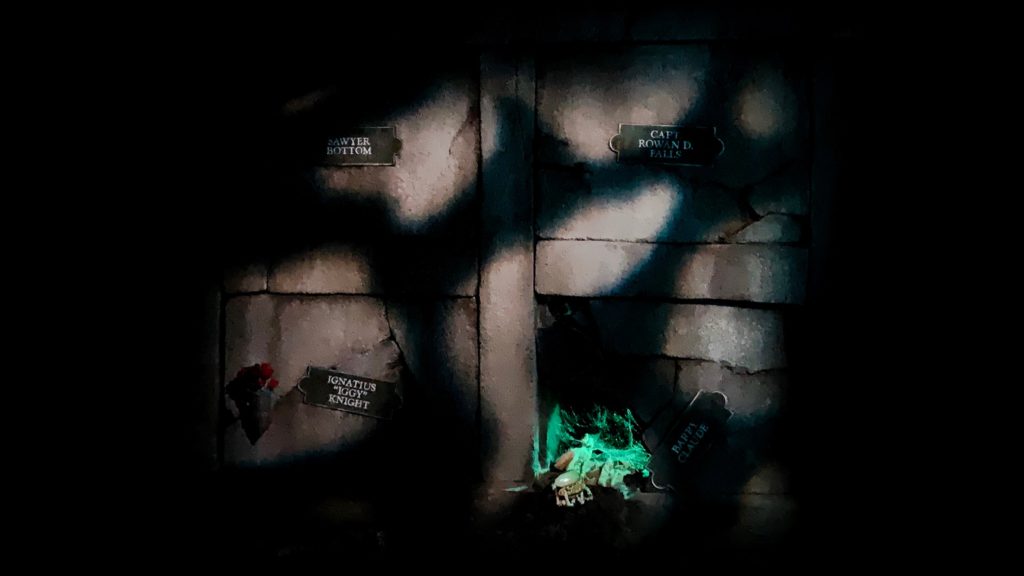 In place of Melanie’s former heroic sacrifice lies the resting place of her new four suitors. Although very poorly lit making it difficult to see, a careful look will reveal the scene to be be a crypt with the names of Barry, Iggy, Sawyer and the Captain inscribed on plagues.

Of the four tombs, Barry Claude’s, has been busted from the inside. His motionless, skeleton arm reaching out towards the passing doombuggies with a wedding ring in hand.

Initially an ironic twist ending to the original story, the following ghost seen in the mirror reflection has been replaced with a scene now featuring Melanie.

Instead of an opportunistic ghoul latching onto your Doombuggy to escape to the mortal world, Melanie will now be found inside the vehicle beside you. Her hands pressed together as she begs guests to “marry me”.

The spooky goodbye kiss to all Haunted Mansions and Phantom Manor, the post-attraction scene depicted Melanie now in total ghost form. Her soul consumed by the Phantom’s evil as a result of her sacrifice to save you from it. With all memory of the prior engagement lost, she menacingly urges you to “Hurry baaaack” and to “be sure to bring your death certificates”.

As part of the Phantom Manor refurbishment Little Leota is no more. Interestingly however the audio does remember in the exiting section of the attraction. Though now its source is a mystery.

Fun fact – despite not being a scene of Madame Leota, the scene is commonly known as ‘Little Leota’ due to the similar effect in the seance is used to achieve it and the same actress as the mystic lending her voice for the role.

In the final part of this series, delve into the revisited, revised version of Phantom Manor’s beloved story. Find out what is new, what is gone and what has been transformed by clicking here, if you dare…