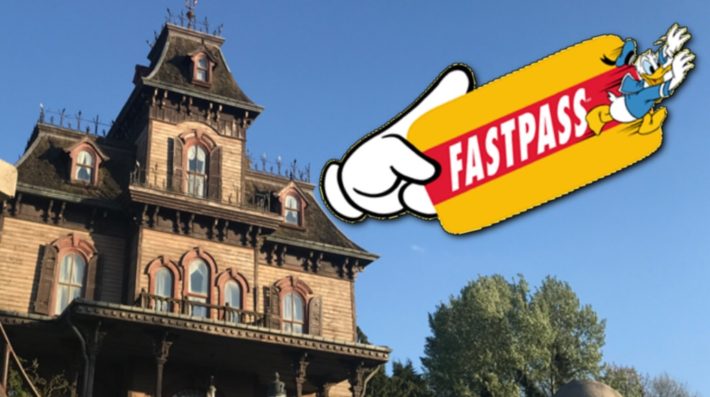 Since closing for its extensive refurbishment, many rumours have flown around as to what changes will be coming to Phantom Manor. While many predictions and hopes spread across the past 9 months have been the centre of discussions one I’m starting to see gather more traction is one of a Fast Pass introduced to the Manor.

Ever since the apparition of a new ‘shelter’ appeared among the gardens of Ravenswood Manor, fans have been debating on its purpose. A meet and greet was suggested but quickly debunked. So too was a stroller storage location. For now the prime guess is somewhere allowing Cast Members to shelter from the French rainstorms. This one actually goes hand in hand with the suggestion of a Phantom Manor Fast Pass, most attractions with the system already introduced station their CMs by hut of similar form to collect Fast Pass tickets from guests.

This may not seem as outlandish as you may first imagine. The spot of this new built shelter, inside the attraction’s entrance square within the garden and queue, seems to place it right before the short walkway leading directly to Phantom Manor’s foreboding front door. A pathway virtually never used seldom for the exceptional. Although lacking a turnstile (that could easily be added) this would make the perfect Fast Pass queueline. Shortening guests wait time to just that within the haunted walls of the lobby and gallery.

But why do we need a Phantom Manor Fast Pass? Is this really necessary? The high capacity and flowing queuesystem already makes the Manor one of the strongest ‘people eater’ attractions in all of Disneyland Paris. I may not have an official numbers to back that but the fact that it rarely hits over 30 minutes, despite the iconic status and a pause in the queue for a pre-show, is a testament to the doombuggies.

Phantom Manor’s reopening in 2019 is perhaps one of the most significant refurbishment endings Disneyland Paris has ever experienced. After over a year behind construction fences, dedicated fans will descend upon Frontierland in their drones to rejoin the Swinging Wake once again. As the new year proceeds and turns to summer, regular guests who also have a love for the attraction will return. Eager to jump into their holiday tradition for another year. Absence makes the heart grow fonder, as Melanie herself would tell you. This extended – and delayed – downtime could very well give Phantom popularity unlike any it has seen before.

Another angle to take on a Phantom Manor Fast Pass is one that sees the future and evolution of the resort as a whole. With the majority of both parks now covered by WiFi as well as a promise to further bring DLP into the 21st century it seems very likely, inevitable even, that either MaxPass or an equivalent will come to Paris.

Designed as digital companion for Disneyland Resort, MaxPass allows guests to make, access and use different park features like PhotoPass and Fast Pass, all from the comfort of their smartphone app, wherever in the resort they may be. For Disneyland Paris it is a technology too good to pass up on. A system that not only bypasses language and physically barriers but is already tried and tested in a resort of similar footprint? I’d be shocked if Disney aren’t looking at it as a long term addition within the next 5 years.

If that indeed is the case and MaxPass is within the future pipeline, more Fast Pass compatible attractions will need to be found. Although Fast Pass is free to guests, in Anaheim MaxPass can set you back as much as $10 a day. If Disneyland Paris want to see a successful migration of the service in Europe they need to ensure value for money.

Step up Phantom Manor. A popular attraction among guests of all variety, currently under refurbishment and with a vacant pathway right up to the showbuilding. The stars have aligned for DLP here and they know it.

Should I be correct in my assumption, not only in a Phantom Manor Fast Pass but also that it is to futureproof the attraction for MaxPass, then this will only be the beginning. I certainly wouldn’t rule out other popular attractions like It’s a Small World or even Pirates of the Caribbean eventually getting Fast Pass down the line. Adding a lot more bang for your euro in a MaxPass future.

Whether or not a Phantom Manor Fast Pass truly is on the tarot cards for our future remains to be seen. There’s a very real possibility I am wrong here and that shelter is nothing more than a hideout from the rain. Given all the evidence I put forward however, plus that the demand and benefits a Disneyland Paris with MaxPass would bring, it seems clear. I believe the future of Phantom Manor will include that red and yellow logo upon its park map description.

A big thank you to DLP Genie for the recent Phantom Manor photos.