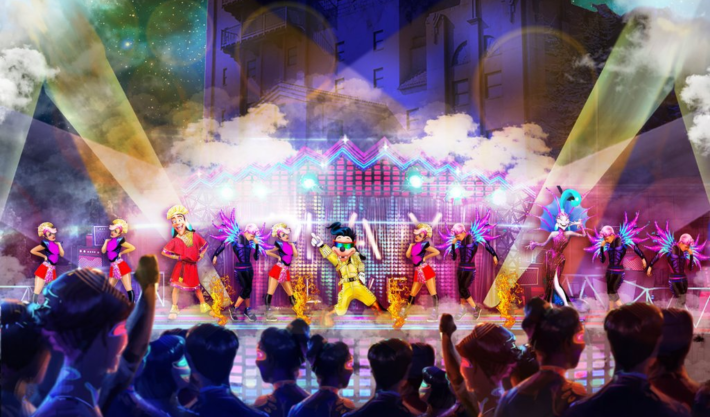 Disney FanDaze is fast approaching with just over 2 months away from the Inaugural Party to Disneyland Paris’ brand new fan centered and driven event. Among many of the already announced details regarding the party due to kick off on the evening of 2nd June is that of a fully fledged unique stage show starring cult favourite, Max Goof.

Very little has been known about this upcoming Max themed show, other than the title Max-Live! Gettin’ Goofy with it and concept art which seems to depict appearances from Kuzco and Yzma of The Emperor’s New Groove fame. Now however it seems that new details have accidentally been leaked from an unconventional but extremely reputable source.

Professional actor and voice talent Jason Marsden – best known as providing the voice of Max in A Goofy Movie and other appearances of the character – tweeted yesterday that he has recently been in the recording booth to record lines for the Disney FanDaze Gettin’ Goofy with it show. This is very exciting news all on its own that DLP are pulling out all the stops and not only ensuring characters will have speaking roles for this ‘one night only’ show but also that they are the most authentic they can possibly be.

The most interesting story however is what we can see from the image Jason tweeted. As seen on his post, he seems to be sharing some sort of official document handed to him by Disneyland Paris for the Max show. My guess would be it would entail details on the show as well as the actual script for him to record. Eagle-eyed fans were very quick to spot that some text is partly visible from the page below the front cover of the document, giving us leaked new information on the show.

It’s difficult to make out the majority of it, and it’s unclear whether or not the details are solely in English or a mixture of English and French, but some assumptions can be made from what is readable. Firstly, the words “22 minutes” as well as a long word under parenthesis (mostly probably “approximately”) are very visible just below the front cover’s title. To me this is as close as we are to confirmation that Max-Live! will be approximately 22 minutes in duration, making it a very content full show knocking close on the door of many main features found throughout the resort.

Directly below this paragraph appears to be a list of possible characters, listing Max, Goofy, Judy Hopps and Nick Wilde. Again it is unconfirmed but I would say very likely indeed this means the Zootopia characters are set to appear in the show. No reference to Kuzco and Yzma oddly, especially as they have already appeared in concept art for the show. That said it is very possible their names as well as names of other characters are simply not visible in this unconventional leak.

The final piece of info I would categorically say is readable from this document image is references to water and pyro effects featured towards the bottom of the document. The latter will probably come as no huge surprise to those familiar with Production Courtyard stage as it is already fitted for such effects during Season of the Force, but I am interested in how possible water effects could be used in conjunction with this. It does make me wonder if we will be in for a Dreams! like show with multiple effects and techniques used together, possibly including projections onto Tower of Terror?

What are your thoughts on these possible details on the Disney FanDaze Max show? Are you excited by any of this new information? Perhaps you can make something out from this document image that I have missed? I’d love to hear your thoughts and opinions in the comments below and on Twitter!