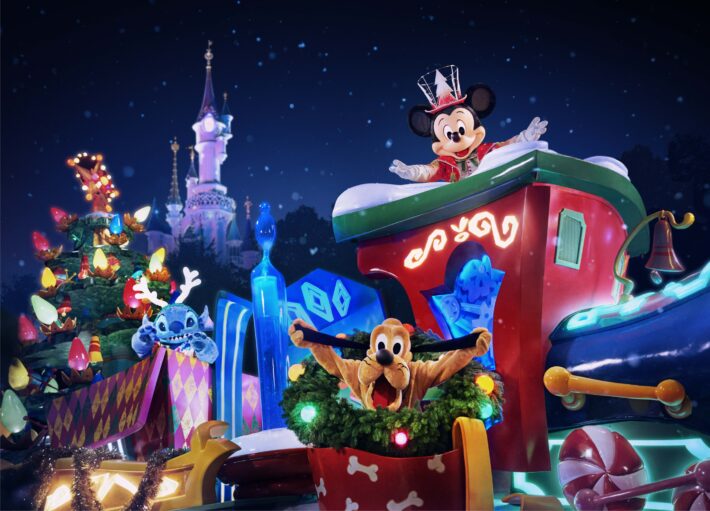 A brand new Christmas Parade is coming to Disneyland Paris this holiday season, as the headline addition to the 2021 Christmas season at the resort.

From 13th November, guests will be able to enjoy ‘Mickey’s Dazzling Christmas Parade!’, the latest iteration to the festive parade and replacing the old Disney’s Christmas Parade that enchanted and spread joy throughout the winter months.

The parade is composed of five gigantic floats, featuring not only Mickey and his friends, but also Disney Princesses and Santa Claus, accompanied by Tinkerbell.

Each of these floats will represent an idyllic Christmas scene with traditional decorations and parade performers will be dressed in luminous costumes specially designed for the occasion.

“This new Parade is a surprise because there is a daytime version and it becomes a new show come nightfall with hundreds of thousands of lights that illuminate these floats and tell a new story,” said Emanuel Lenormand, Show Director at Disneyland Paris.

Hints towards a new Christmas parade have been long in the planning but seemingly went quiet due to world events. Originally announced in 2019, a new Christmas parade was anticipated for the holiday season of 2020 before the global pandemic lead to understandable delays and postponement of operations, especially as parades halted throughout Disneyland Paris at this time.

As restrictions continue to ease in the resort however, now plans can be made to introduce Mickey’s Dazzling Christmas Parade to the public to bring some much needed joy and magic back to the resort this festive period.

Along with the addition of a new parade, guests have plenty to look forward to as we head into the finale of 2021 and welcome in the new year. Next week on 23rd October sees the re-introduction of The Lion King: Rhythms of the Pride Lands in Frontierland Theater, while Christmas visitors will also be able to enjoy the return of the nighttime spectacular Disney Illuminations, which will return from 21st December 2021. Then when the Xmas celebrations come to an end in January, the partying doesn’t stop as Disney’s Stars on Parade makes its long awaited return on 10th January 2022.