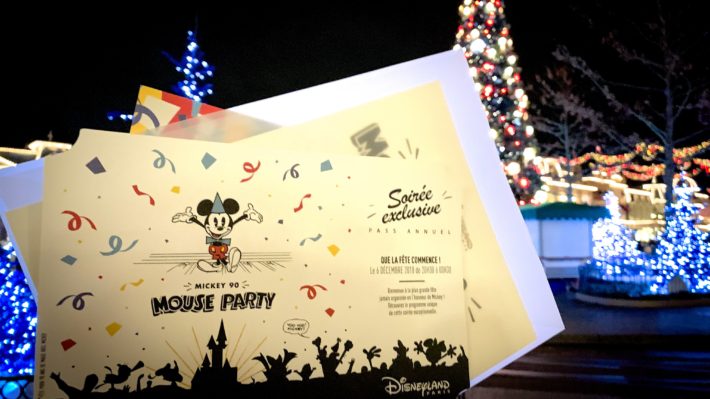 Marking the quarterly long celebration of Mickey Mouse’s 90th birthday, Mickey 90 Mouse Party was the final annual pass event of the year and the first held within Disneyland Park. Although its initial announcement was met with criticism over its bizarre Thursday night timeslot, many were quick to book their place after the announcement of a certain show’s return. I was lucky enough to be one of those in attendance to the Infinity and Magic Plus exclusive party, though with my last experience of these AP nights, I did go in cautious but hopeful.

Being the first of these exclusive annual pass nights in Disneyland Park, many questions were asked with regards to how the night would be managed. The much larger size of the resort’s main park opened up a lot more room than Walt Disney Studios Park but with all shows taking place in Main Street U.S.A., crowds would still be concentrated to the one land.

Entering the event was in itself a peculiar state of affairs and one I feel could have been handled better. Upon entering the main park entrance at Disneyland Hotel and showing our tickets, we were then brought along the standard queuing lines regularly guests would take when buying standard tickets on a normal operating day. At the end of this queue however, instead of advancing to the awaiting turnstiles we were directed to the far right of the gates by Guest Relations. Here we were sent into another queue before, eventually, taking us through the turnstiles and into the party.

Perhaps being the first AP night in Disneyland Paris’ original park was the cause of such teething problems, but a theme of poor crowd control was one that continued to appear all through the night. The insistence of all guests watching the opening ceremony, a compliant raised in previous nights such as FanDaze and the 25th Anniversary Grand Finale, returned once again leading to a cramped experience where few had a good view to see. This also meant that character hunters were unable to pre-plan for their respective priority meets.

When information was first released on what to expect from the Mickey 90 Mouse Party, this was the one show we had the least expectations of. The French name fails to appropriately translate into English and the lack of a description meant the show could have been just about anything. What we got though was probably the highlight of the entire evening and an incredibly fun show. 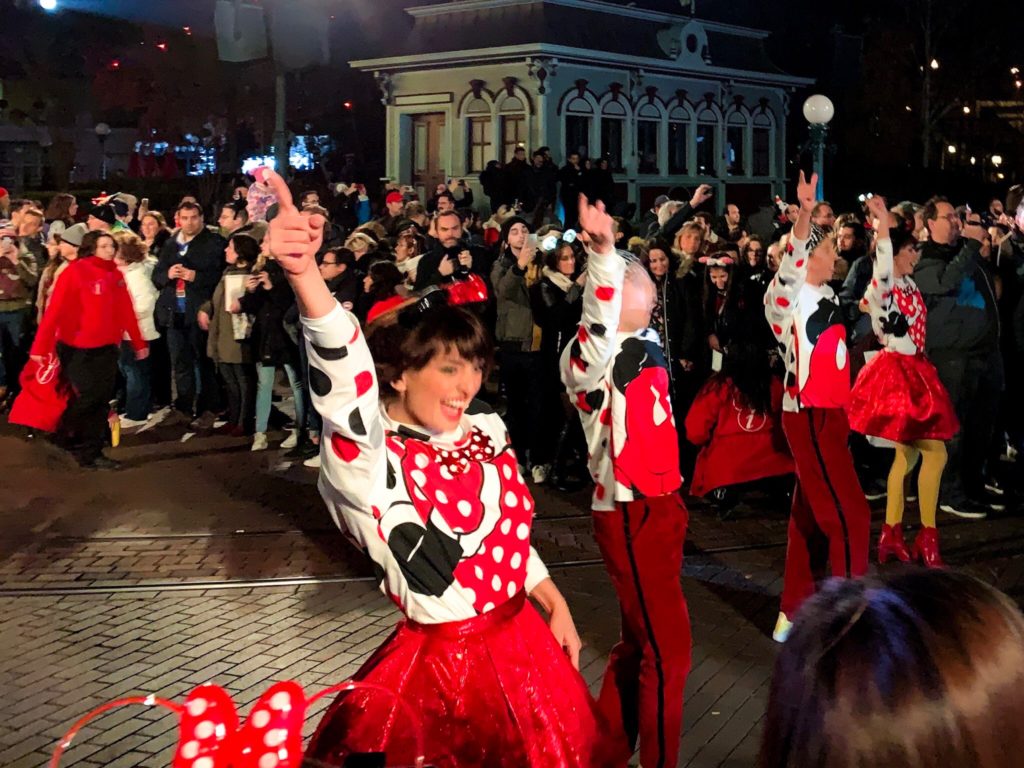 Taking strong inspiration from a range of Disneyland Paris classics like The Grand Celebration, Les Folies introduced itself on Main Street with Mouseketeer dancers partying along the parade route all while Mickey sits proud the old FanDaze car – now sporting a new paint job.

Once Mickey and his pals reach Central Plaza however, that is where the real fun begins. Les Folies made full use of the ‘one night only’ stage in the park center and became a treasure trove of characters and party fun as the birthday boy’s closest friends all came to join the fun. Each set representing a different land of Disneyland Park. This very much felt like a spiritual remake of the Happy Anniversary Disneyland Paris show which ran on the castle stage and, as someone who loved that show, was a great treat for me. 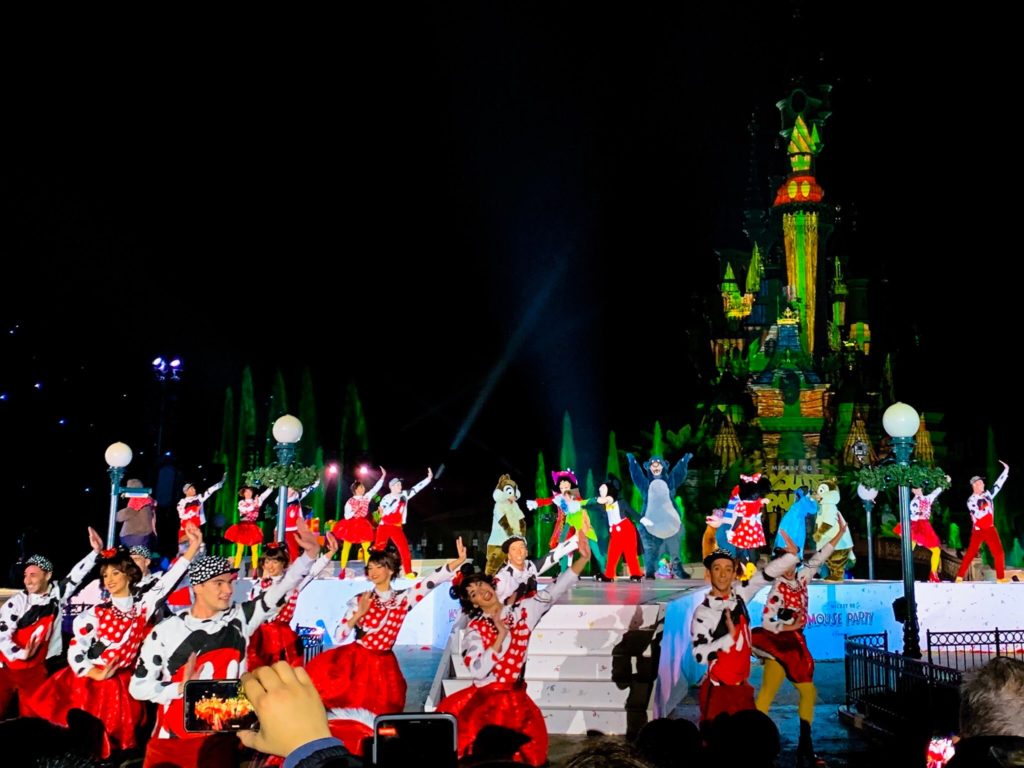 All of this however was overshadowed by the soundtrack. The individual songs for each of the respective lands was a welcomed sound to my ears no doubt but the true standout was Mickey Mania. Originating from Tokyo Disneyland this hyperactive, 90’s inspired party beat was loud, bizarre and absolutely wonderful. The fact that the music and its lyrics have managed to stick with me well after the party came to a close is testament itself to how fun it was. The perfect song for a fun, lively birthday bash.

Yes, it returned! For one night only the award winning, fan favourite precursor to Illuminations wowwed passholders one last time in the technologically marvelous way it always had. There’s very little that can be said here about the show without the risk of repeating myself. It was Disney Dreams!, exactly how you remember it in its last running form. For a little more personal thoughts and experience of the show, I suggest you check out my farewell piece to the nighttime spectacular from last year. 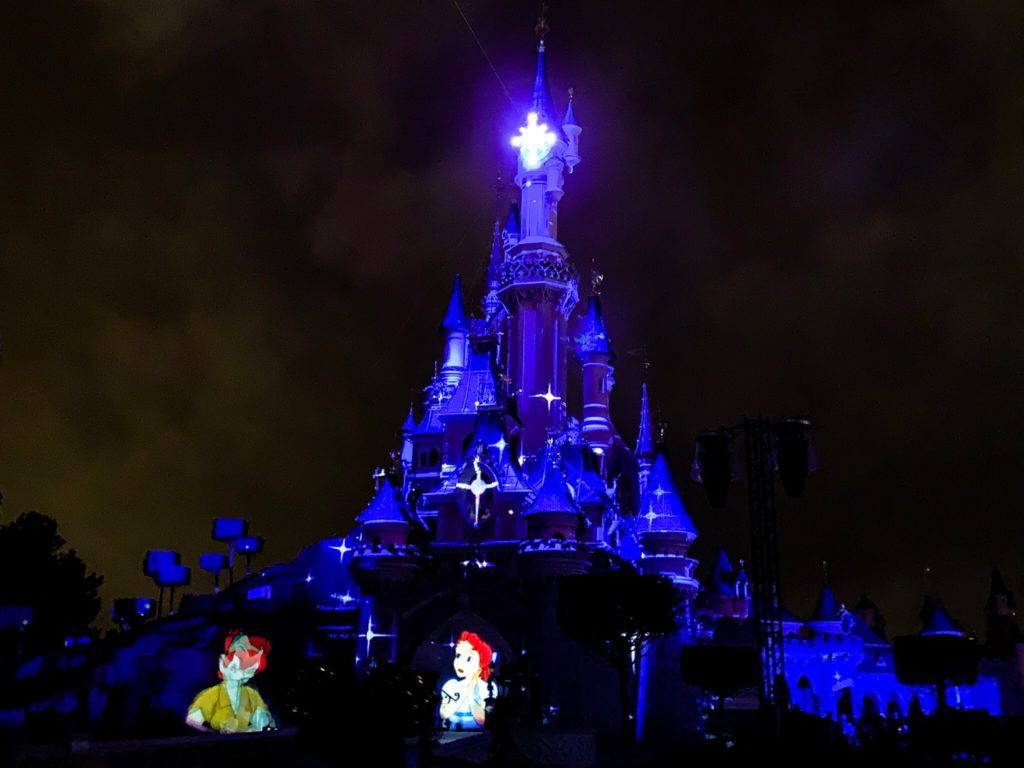 Seeing out the party and with a bang (literally) was Mickey’s Birthday Surprise. Much like Les Folies this show started off on Main Street before slowly making its way up to the Central Plaza stage. Those huddled around the AP night’s temporary venue spot weren’t void of entertainment as we waited. The night’s finale began on the castle with a running of the excellent Mickey 90 pre-show seen before Illuminations during the World’s Biggest Mouse Party. A very nice surprise for those familiar with it!

Those who did all their homework in preparation for the night would unfortunately be left disappointed however. Due to poor guest flow and crowd management, which lead guests being forced to constantly move their standing position or push back to space that simply wasn’t there, watching the birthday surprise itself was a very cramped and claustrophobic affair. 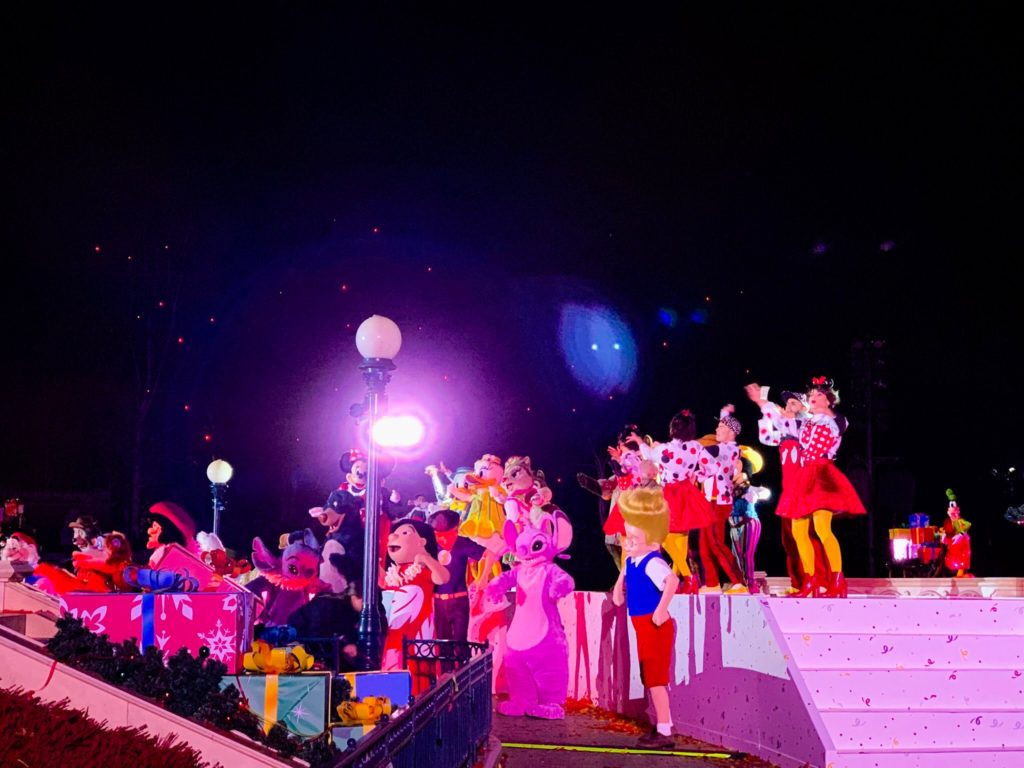 Normally, this could be somewhat expected. Many shows and events such as this always bring in many numbers so getting nice and cosy to your fellow guests becomes an occupational hazard. The problem though is that guests for weeks had been encouraged by Disney to learn specific dance moves for the final show. When the time came to bust these moves nobody had the room to do so. It’s a shame as having the whole crowd taking part in one massive rendition of It’s a Good Time would have been a great memory for the DLP theoretical scrapbook.

My personal highlight of the finale show was exactly that, its finale. Bringing projection fun back to Sleeping Beauty’s castle as Minnie and friends greeted the main Mouse with his birthday cake before a spellbounding firework display to see out the night. I haven’t seen any mention of it on or since the AP night, but does anybody else think the cake has an uncanny appearance to a certain Anaheim chateau? 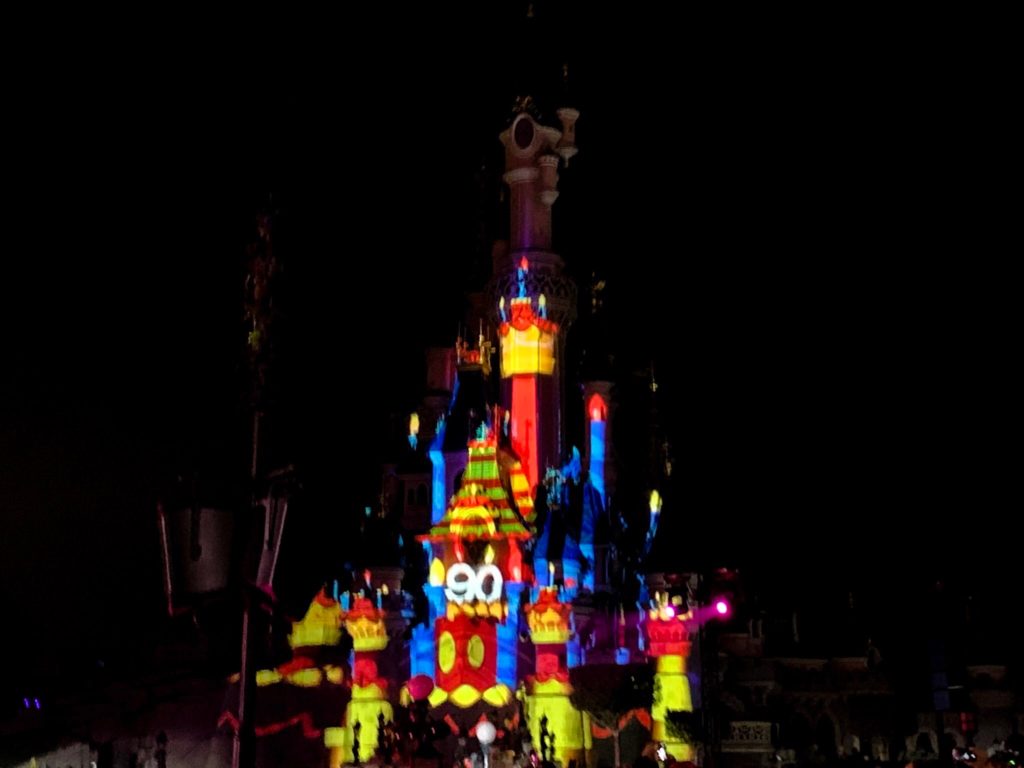 The Mickey 90 Mouse Party AP night promised us celebration and fun centered around the leader of the club made for you and me, and for that it certainly delivered. The vibrant, 90’s inspired and energetic music, costumes and general atmosphere that filled Disneyland Park certainly brought a unique sensation to the party and had many a guest dancing the night away. All this was topped by a magnificent show and the return of a beloved fan favourite in Dreams!

Which makes it feel all the more unfortunate that the night could have been even better. Poor crowd management and the Central Plaza stage itself became responsible for views of the entertainment on offer to be vastly obscured for most in attendance. The crammed number of guests and poor visibility indeed rendered me unable to catch one of the night’s shows; Let the Birthday Surprise Begin.

As this was the first Annual Pass night in Disneyland Park, it’s possible these were mere teething problems combined with the risk of reintroducing a central stage. If that be the case then I can understand the shortcomings to an extent – I was fortunate enough to still have a great night.

The next AP event has already been confirmed to follow a Pirates & Princesses theme, making it located in the original park once again nigh certain. I trust lessons can and will be learned and feedback taken into account to ensure the next night irons out these creases and gives us a party to shout about.

Did you manage to attend the Mickey 90 Mouse Party AP night? Did you have an evening similar to mine or was yours completely different? I’d love to hear your thoughts so be sure to let me know over on Twitter!