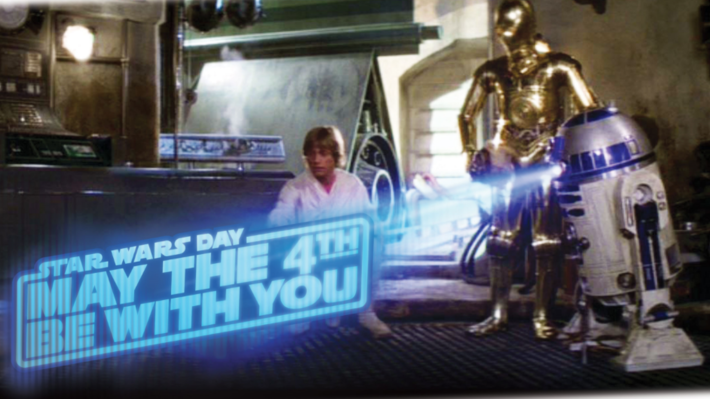 It’s the day to celebrate all things Star Wars all around the world, and once again Disneyland Paris will be hitting the hyperdrive in Discoveryland this May the 4th for Star Wars Day.

Universally adopted by fans as an unofficial holiday to the Galaxy, far far away, May the 4th has only grown and grown ever since the acquisition of Lucasfilm from The Walt Disney Company. Now, the day is almost as big as the mythical force its name smartly puns with special events, news and other fun all over the Disney umbrella.

For the 2019 edition of the day, guests attending Disneyland Park will be able to meet up with none other than the legendary droid R2-D2 and the daring Wookiee Chewbacca. Those loyal to the Resistance will be able to give their support to these iconic Star Wars characters outside Arcade Beta (better known as the side entrance to Videopolis) and Discoveryland Theater.

Venturing into the Arcade Beta however and younglins will be in for a treat as they can have their face painted in honour of the galactic day.

Of course, May the 4th wouldn’t be the same if you couldn’t represent your love of Star Wars to the masses. For the day only guests are permitted to dress up as their favourite Jedi, Sith, Bounty Hunter or any other characters of their choosing. Normal Disney Parks costume rules apply however, so be sure to leave your lightsaber and blaster at home!

Star Wars has always had a place within Disneyland Paris ever since the resort’s opening in 1992. Star Tours and its partnering Star Traders store were opening day features to Disneyland Park which of course got their ‘The Adventures Continue’ update in early 2017.

Since then things have only increased in bringing the world renowned franchise into the parks, particularly Walt Disney Studios Park. The annual Star Wars event saw its third iteration this year with Legends of the Force, while back in Discoveryland Hyperspace Mountain continues to thrill guests on a mission to fight the Empire.

The stories may be from a long time ago, but the future is looking very bright for Star Wars at DLP. This year’s release of The Rise of Skywalker will see another brand new scene added to Star Tours: The Adventures Continue to coincide with the movie release.

Work should also shortly begin on the inclusion of a dedicated Star Wars land in the €2 billion Walt Disney Studios Park expansion. Though nothing is confirmed as of yet, concept art does suggest this will be a version of the highly anticipated Galaxy’s Edge opening in Disneyland and Disney’s Hollywood Studios this year.

Will you be in Disneyland Paris this May 4th? Are you excited for what Star Wars event the resort has to offer and looking forward to the future? Be sure to send me your thoughts as either a force projection or via Twitter!