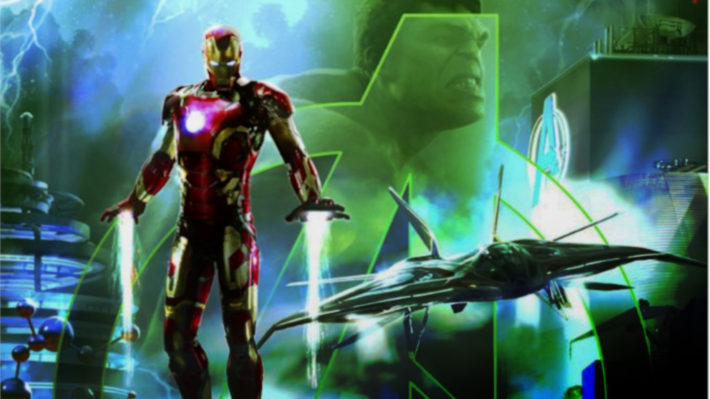 A new set of publicly released plans have revealed some new details and basic look at the upcoming attractions, restaurants and place-making for the future Marvel land at Walt Disney Studios Park.

In accordance with French law, future projects such as the planned Marvel land must have plans and concepts made available to local residents. Twitter maestro ED92 has shared the latest plans that have been released.

The biggest reveal of these plans suggest the queue portion for the Iron Man and Avengers retheme of Rock n Rollercoaster will be entirely reworked and feature its own pre-show.

From these pieces, it seems that the queue portion of the building is to be completely gutted with the new interior housing three queues. A standard stand-by line, a Fast Pass line and a Single Riders queue. Plans also confirm the presence of a pre-show segment though its placement is total different to the existing Aerosmith part of Rock n Roller.

As for the coaster’s exterior, concept designs for the attraction (working title “Jukebox”) feature an arched platform reminiscent of the Quinjet landing pad seen on Avengers Tower in the Marvel Cinematic Universe. This indeed lines up perfectly with the famous jet previously appearing in the first concept art of the land.

Additionally, the building’s new facade stays in line with what we saw in previous concepts. The curved, ultra modern design coexisting with new greenery in a part of the Studios sorely needed it.

The future E-Ticket isn’t the the only thing to receive new info. The public plans also gives us a better look at the land itself and some new elements that will be coming to it.

The previously announced Iron Man and Spider-Man attractions (the latter codenamed “Slingshot”) will be joined by at least two restaurants and a Meet & Greet building under the working title “Mission Control”.

Bringing some much needed new cuisine to Walt Disney Studios Park, the promise of “Restaurants” at the current Restaurant des Stars/Blockbuster Cafe/Captain Marvel M&G building seems to confirm more than one will be coming to the Marvel land.

Although no more information has been revealed, a closer look on existing concept art will spot the PYM Technologies logo on the large building. This suggests one of the restaurants may be based around scientist Hank Pym’s research including his Ant-Man and the Wasp suits.

The other building, “Mission Control”, too has little information other than its purpose. That said as a massive fan of Marvel characters and believer of their permanent presence in Walt Disney Studios Park (outside that of Marvel Season of Super Heroes) it is very promising to here a full time meet location will be part of the land.

Interesting to note as well is that two relics of WDS history are set to remain once Marvel land opens. Moteurs… Action! Stunt Show Spectacular and Café des Cascadeurs still appear in their normal locations within these plans. Although firmly part of Backlot as it currently exists, their location tucked away towards the right hand side of the area does give wiggle room to just pass superhero boundaries.

Initially announced as part of the Walt Disney Studios Park expansion, the dedicated Marvel land will be the first of three brand new lands coming to Disneyland Paris’ second gate. Along with a large lake in the park’s new center Frozen and Star Wars will receive full themed areas in a project estimated at €2 billion.

Work has already begun on transforming the old Backlot site into the future land. April saw the closure of Armageddon with construction fences immediately going up to hint towards the future. Rock n Roller Coaster is also set to end operations this September as it prepares for Tony Stark and the Avengers to take residency.

This won’t be the only piece of Marvel action set for Disneyland Paris, either. Summer 2020 will see the re-opening of the four key Hotel New York – The Art of Marvel which celebrates the tremendous work that goes into the stories, comic books and movies of everything from the superhero giants.

Are you excited by these recent concept plans for the upcoming Iron Man and Avengers roller coaster? What are you most looking forward to about the planned Marvel land in the Studios? Be sure to assemble and send me your thoughts over on Twitter!