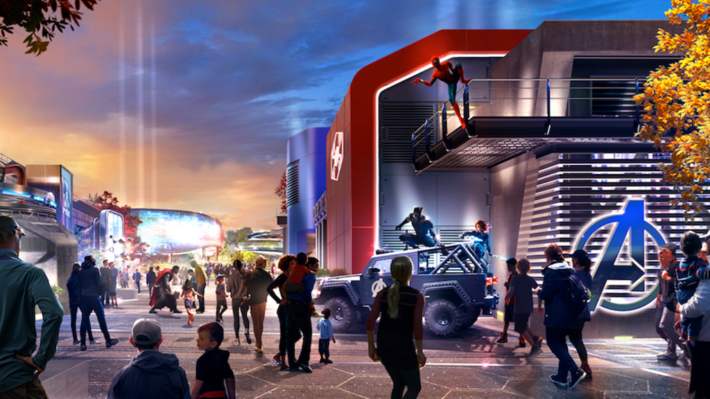 The new piece, officially revealed by Disney, appears to show several new details including a Spider-Man or Avengers themed attraction replacing Armageddon. The inclusive of a Pym Technologies logo on the current Restaurant des Stars building indicates something related to Ant-Man and the Wasp will appear there.

Also announced today was confirmation that the land will connect to future Marvel lands in Disney California Adventure and Hong Kong Disneyland. Referenced as a ‘global Avengers Initiative’, the three areas will share the same narrative and overarching story.

“In California and Paris, Tony Stark is retrofitting two of his father’s Stark Industries sites into new hubs for training and innovation. Through partnerships with S.H.I.E.L.D., Pym Technologies, Masters of the Mystic Arts and the new Worldwide Engineering Brigade, The Avengers and their allies will forge new global campuses to champion the next generation of heroes. Who’s ready to answer the call?”

This is the second piece of concept art to appear for the upcoming Marvel land. The first came back in March shortly after the project was announced along with the rest of the Walt Disney Studios Park expansion.

Announced back in February, the €2 billion investment into Disneyland Paris will see not only Marvel but Star Wars and Frozen areas come to the second gate. A massive lake will be also constructed, overall doubling the physical footprint of the park.

In addition to new concept art, hints have also been made as to what guests can expect when the land is finally complete.

“And soon, in both Disney California Adventure park and Disneyland Paris, guests will encounter the heroes in new and exciting ways, from the mystic arts of Doctor Strange to the gravity-defying feats of Spider-Man. Guests will also experience the latest in Pym Technology with Ant-Man and Wasp and be wowed as Iron Man, Captain Marvel, Black Panther, Captain America and more leap into action on a moment’s notice.”

Although no official dates have been given, it is reported that Backlot’s Armageddon will close in April 2019 to make way for its Marvel replacement. The Iron Man re-imagining of Rock n Roller Coaster is also expecting a completion of 2020.

Are you excited by the new concept art of Disneyland Paris’ future Marvel land? What are you predictions and hopes for it as well as the rest of the Walt Disney Studios Park expansion? Be sure to let me know over on Twitter!