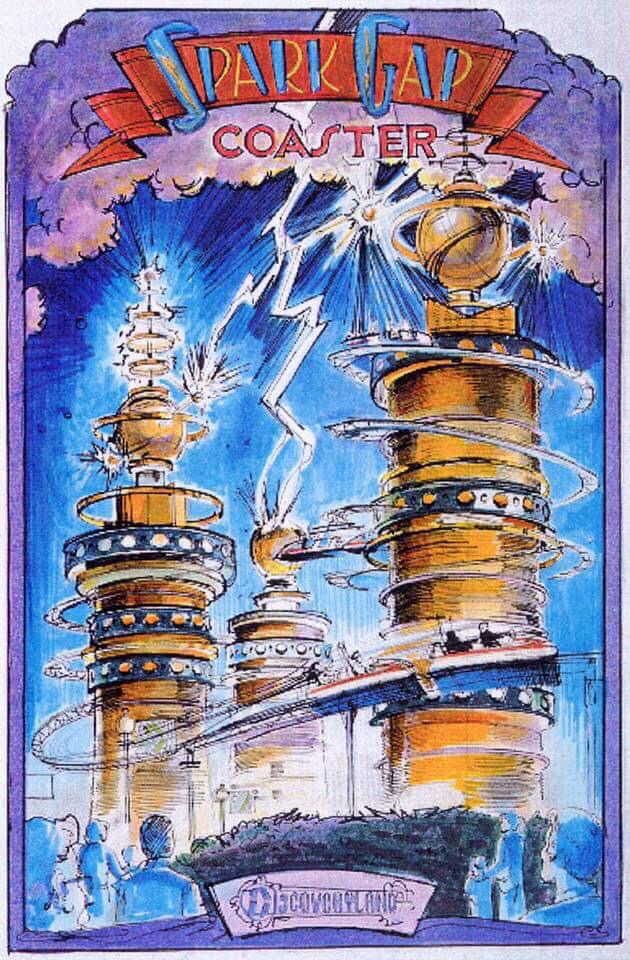 Despite being only 23 years old, Disneyland Paris has a very rich history of forgotten and cancelled ‘future’ attractions which never saw the light of day. Many fans will already be fully aware of the once planned Little Mermaid and Beauty and the Beast attractions in Fantasyland, while other eagle eyed guests may notice how a certain gap in WDS would perfectly fit a sound stage attraction featuring a much loved comedian. These tropes of trivia though are very much wide spread and popular within the bask of DLP online information, unlike what I stumbled upon very recently.

Last week, Disneyland Paris celebrated the reopening of Space Mountain: Mission 2 (after its 7 month refurb) with a shareholder event giving members an early peak at all the hard work before the attraction reopened its doors on 25th July. As part of this event several pieces of old Space Mountain concept art were on display, providing some interesting insight on the Imagineers’ ideas and inspirations over 20 years ago. As ED92 showcased on Twitter several days ago, the Discovery Mountain name wasn’t the only thing to be left on the cutting room floor during the magic making process of Discoveryland.

As seen in the concept map shown above, there were actually TWO additional attractions planned as part of a Discoveryland expansion between 1992 and 1994. To the left of the image (directly opposite to the now Buzz Lightyear Laser Blast) would have stood an attraction called Rainbow Wars. On the far right of the map however – situated along the small and unthemed path connecting Discoveryland and Fantasyland – would have been Spark Gap.

Judging by the concept art above, the attraction would have been a kiddie coaster of some description, similar to that perhaps of Casey Jr over at Fantasyland. Depending on the accuracy of this artwork, the coaster’s structure would have been two large golden pillars in a steampunk fashion (very fitting with the rest of Discoveryland) with guests going on an electrical adventure in a 2 car train seating 8 in total. Pretty neat if you ask me, especially as this would have not only gave Discoveryland a much needed larger footprint but also some theming in what is without doubt the ugliest part of the most beautiful Magic Kingdom park in the world. Additionally, this would have gave Disneyland Paris a new coaster while it waited out for the resort saving Space Mountain, I wonder if this idea was scrapped in preference for the thrill coaster Indiana Jones and the Temple of Peril? It’s no secret Indy was brought in as a quick fix while guests waited for Space’s completion and it’s certainly a more similar attraction than a kiddie coaster would have been.

It appears however that plans to build Spark Gap were pretty serious, as an attraction poster even made its way to the concept art stage! As shown below, the poster would depict the two golden pillars attracting lightening (somehow I can’t see health and safety letting that one slide) and we also get the full title of the attraction: Spark Gap Coaster.

As for the second planned attraction – Rainbow Wars – that and the very vague building structure in the concept is the only info we have on it. If I had to guess however, I would say the attraction was a dark ride of some description judging by the building size, the name and fact Discoveryland (back in the 90s) had no family friendly dark ride attraction. My second guess would be another 3D movie showcasing the latest and now dated colour effects but I don’t know how likely that would be with another 3D show – Captain Eo – running at its height of popularity in the same land.Do you have any more info regarding either of this attractions? Do you wish they came to fruition or are you glad their memories will only ever lie in concept art and then speculation of fans? I’d love to hear your thoughts in the comments or over on Twitter at @NI_DLP_Geek!

A big thank you to @ED92live for the images and information.