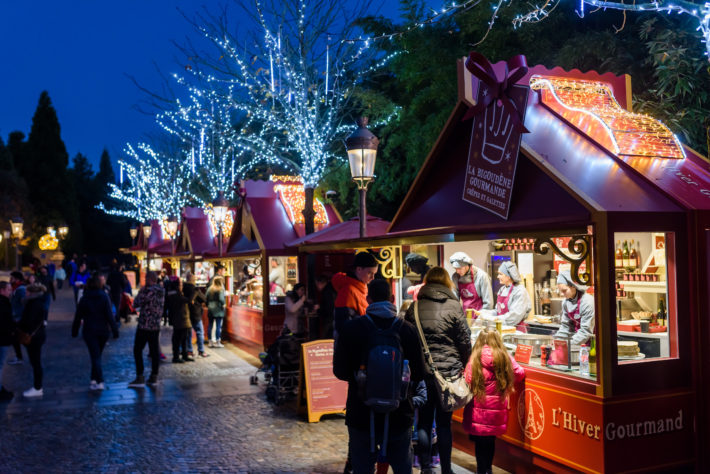 Right off the back of another success Summer Rendez-vous Gourmand, the claret chalets will once again return to Place des Remy to offer a selection of soups, wines and other delicacies to warm up guests during the colder months of the year.

For the 2019 version of the festival, four chalets will be available offering a selection of products from throughout Europe:

Les Douceurs d’Hiver – Warm up with a selection of hot chestnuts and mulled wines.

Les recettes de la Cigogne – Inspired by cuisine from the Alsace, expect guest favourites such as sauerkraut and pretzels.

Goûts & Saveurs des Montagnes – Based on specialities from Savoie including tartiflette, ham and raclette cheese sandwiches and wine.

In addition, throughout Disney’s Enchanted Christmas season the chalets will offer select seasonal treats such as gingerbread and Christmas beer. Festive foodies should feel right at home too as Place des Remy will once again become a Christmas wonderland to perfectly compliment both the area and L’Hiver Gourmand.

Topping off this mini celebrating of Winter cuisine will be the special appearances of Ratatouille’s very own Remy & Emile. The pair will be meeting guests in Place des Remy all throughout the food festival, typically from 10:30am – 5:30pm.

L’Hiver Gourmand will return to Walt Disney Studios Park from Thursday 7th November, throughout the new year and until Sunday 15th March 2020.