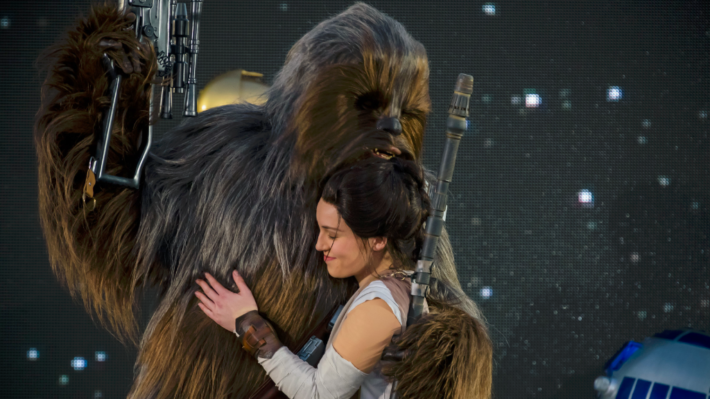 The Galaxy Far, Far Away returns to Disneyland Paris with Legends of the Force: A Celebration of Star Wars. After two successful stints under Season of the Force, the winter season is back with a new name but with plenty of familiar faces and shows.

For Star Wars DLP fans, Legends should be expected as the standout fixture of the resort’s calendar the best way to get your space opera fun until the franchise makes permanent residence in Walt Disney Studios Park. With the full details list now revealed we can delve exactly into what’s on offer for an idea on how strong in the Force these legends are.

Standing proud as the signature of Disneyland Paris Star Wars seasons, Star Wars: The Galactic Celebration returns to take over the Tower of Terror before park closing for a nighttime spectacular from lightyears away.

Though the majority of the show is expected to stay the same, some new scenes and character scenes have been announced to add a little more value for the dedicated fans. Scenes from The Last Jedi and 2018’s Solo: A Star Wars Story will be making their projection mapped debut while BB-8 and fan adored Boba Fett are expected to take to the Production Courtyard stage for the very first time.

Legends of a Galaxy Far, Far Away

Another returning feature from last iterations is that of a daytime stage show. Legends of a Galaxy Far, Far Away provides a slight name change but is expected to be the same show from last year.

Just like that of The Galactic Celebration, Boba Fett and BB-8 will both feature in the show, hopefully adding new scenes and music to boot.

Bringing some original trilogy charm to Production Courtyard this year will be the new happening, The Imperial March. Throughout the day, Stormtroopers lead by the Sith Lord Darth Vader will take to Walt Disney Studios Park in a display of power and dominance over the Rebel Alliance.

March of the First Order

Back again for Legends of the Force is Captain Phasma of sequel trilogy infamy and her March of the First Order. Taking to the Production Courtyard stage, Phasma leads her team of new look Stormtroopers through an exercise of discipline and control.

Unless being kept a surprise, this is likely to be the same show that ran during last year’s Season of the Force.

Just as Stormtroopers will accompany Captain Phasma upon her First Order March, the buckethead soldiers will once again appear on their own in the hunt for Resistence spies.

The big addition to Legends of the Force! This year Disneyland Paris will finally be able to meet Rebel and Resistence hero and co-pilot of the Millennium Falcon, Chewbacca.

Situated in Production Courtyard, Chewie will be meeting guest star throughout the the day. Fortunately and unlike Marvel’s Captain America or Spider-Man, the Wookiee will not need the Lineberty app to join the queue, with the classic system being opted for instead.

Are you excited for Legends of the Force – A Celebration of Star Wars? Will you be visiting Disneyland Paris during the run of the season? Be sure to keep an eye out for my forthcoming review of the season as well as sharing your own thoughts over on Twitter!