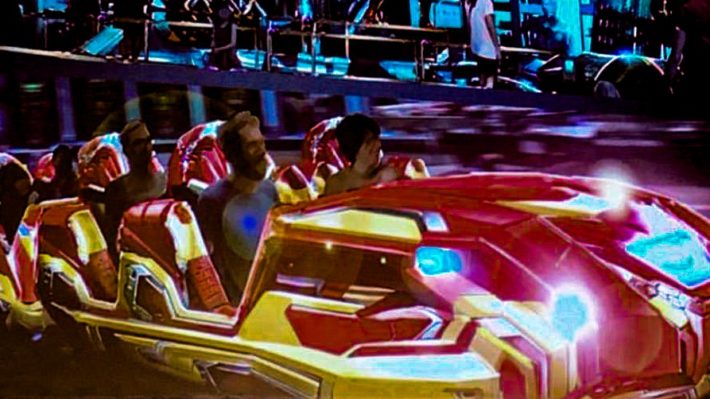 A first look of the trains for the upcoming Iron Man roller coaster in Walt Disney Studios Park has been revealed in the form of new concept art.

The trains which appear to be slightly altered versions of the existing Rock ‘n’ Roller Coaster ones will be themed around the iconic Iron Man suits from the Marvel universe. Complete with arc reactors and a red and gold finish.

The new concept art was initially unveiled at the IAAPA Expo Europe, held this year in Paris. Although the artwork is yet to be officially released by Disneyland Paris, Instagram user @marvelousdavy was able to capture an image of the concept art.

Replacing Rock ‘n’ Roller Coaster which closed its doors for good at the beginning of September, this will be the first roller coaster based on a Marvel property in a Disney park. Although the track layout is set to stay the same the entire queueline will be recreated from the ground up to suit the new theming. Now we can add the trains as confirmed changes coming to the attraction.

This is the second new piece of concept art featuring the Iron Man coaster to come out in quick succession. Last week the new DLP Media Expo saw the release of another new piece of Avengers Campus showcasing the coaster as the main focus. Also unveiled at the Expo included the 2020 schedule at Disneyland Paris and the first detailed concept art of the future Frozen Land.

Of course, the Iron Man roller coaster won’t be the only Marvel addition to Disneyland Paris. The coaster will be part of the new Avengers Campus land which will also include an as of yet untitled Spider-Man attraction as well as a Marvel characters meet & greet building.

Next year is also set to see the re-opening of Disney’s Hotel New York under its ‘The Art of Marvel’ retheme. Reservations for the hotel will be available from 5th November.

The Iron Man roller coaster is set to open along with the rest of Avengers Campus as Walt Disney Studios Park in 2021.