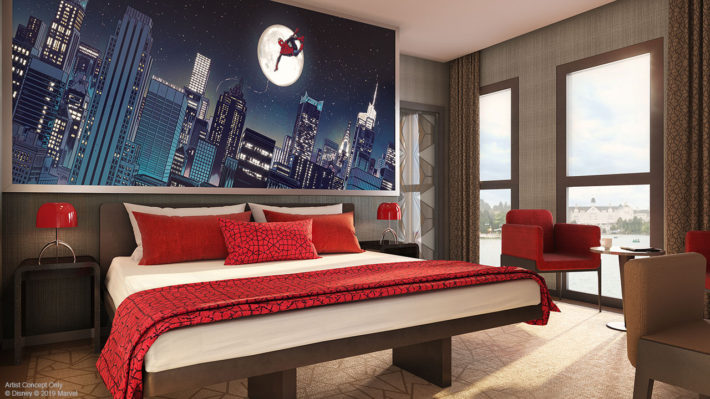 Hotel New York – The Art of Marvel will include locations for guests to meet their favourite Marvel characters.

The announcement came at the D23 Expo 2019 during the Disney Parks, Experiences & Products panel hosted by Chairman Bob Chapek.

Closing for an extensive renovation earlier this year, Disney’s Hotel New York is set to be transformed with the new subtitle ‘The Art of Marvel’. This will be the first hotel to receive a Marvel theme for both Disney and Disneyland Paris.

This however will not be the first time the Marvel superheroes have appeared in the hotel. In 2018 as part of Marvel Summer of Super Heroes guests were able to meet Captain America, Black Widow or Thor as part of the Marvel Signature meal. Although today’s announcement does not suggest a return to this meal it is good the meet & greet segment of it will.

Additionally, the D23 expo also revealed brand new concept art on the suites that will be available to book when Hotel New York – The Art of Marvel opens next year.

Suites will be dedicated to a single hero of the Marvel universe and include one of a kind artwork commissioned by a Marvel artist.

Previous details already revealed about Hotel New York – The Art of Marvel include information on the standard rooms, lobby and restaurant including information that each floor will have corridors dedicated to a particular hero.

Hotel New York – The Art of Marvel will open in Disneyland Paris in Summer 2020.