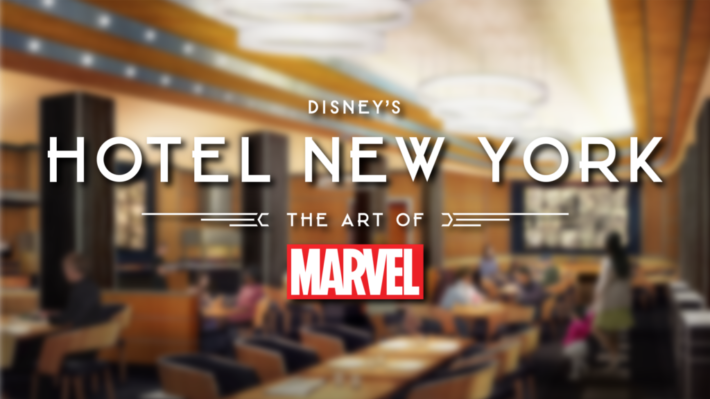 A brand new logo, details and concept art for Disney’s New York – The Art of Marvel have been released, the day the 1992 original hotel closes its doors for the upcoming renovation.

Initially announced at 2017’s D23, the Lake Disney viewing hotel will undergo a major refurbishment seeing Marvel and Marvel Super Heroes added to the interior and rooms. Unlike other Disney hotels, New York will be completely closed to the public until the redevelopment is complete.

This comes as the hotel welcomed invited members and former employees to return for a closing ceremony last night and today, 6th January 2019, in a dignified send-off celebrating both the old and what is set to come next year.

“It is a new chapter, marked by unforgettable memories, both for our guests who stayed there and for all our Cast Members who worked there.” said Martina Sardelli, Vice President Operations Hotels & Disney Village.

“Disneyland Paris always keeps moving forward, to be at the forefront and exceed expectations. It is precisely this taste for innovation and this avant-garde spirit that we celebrate today.”

The redevelopment will see the hotel rebrand into Disney’s Hotel New York – The Art of Marvel and receive Marvel superhero touches and themes. Comparable to that of the other on-site properties this doesn’t mean an entire retheme but more subtle inclusions that guests will be sure to spot.

Earlier last year we got a glimpse of what the outside of the new look Hotel New York may look like. The concept art released showed a minor change in the colour scheme with most notably being a removal of the old skating rink.

The hotel lobby, rooms, restaurants etc will keep a luxurious, contemporary aesthetic though one brought more into the 21st century. The interior design is said to be sleek and modern, much like something you may see Tony Stark himself live in when he isn’t saving the day as Iron Man.

As the name may suggest, Hotel New York – The Art of Marvel doesn’t opt for taking you into the Marvel universe but rather a showcase of the stunning styles, designs and art that goes into the beloved franchise. Guests will find props, storyboards, sketches and the likes from both the comic book and film iterations within the hotel with rooms populated with artwork of the famous superheroes; all in that art deco-esque style we know Hotel New York for.

Perhaps most interesting however will be the exclusive suites on offer. Of the 8 available, each will be one-of-a-kind themed to the Big Apple city and the Marvel Super Heroes. The art design for each room will be done by an official Marvel artist.

Disney’s Hotel New York – The Art of Marvel is set to reopen it’s doors in the Summer of 2020.