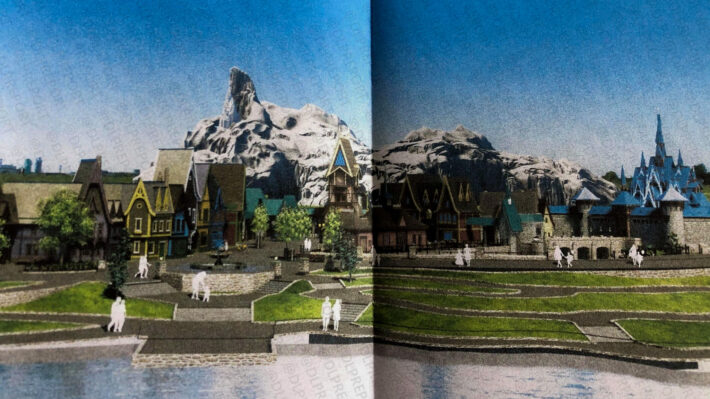 Newly released permits for the upcoming Frozen land at Walt Disney Studios Park reveal the first detailed look at the placemaking, theming and additional information at one of the most immersive additions to come to Disneyland Paris.

In addition to a gorgeous re-creation of the famous port-side kingdom Arendelle from Frozen and Frozen II, the land will feature a restaurant, shopping, dedicated meet & greet location and a brand new attraction.

DLP Report were able to get a hands-on look at legal permits publicly provided regarding about the upcoming land and have very kindly shared the information both on their Twitter and new Facebook page.

The brand new land will proudly sit at the upmost tip of Walt Disney Studios Park and beyond the new lake centerpiece and host a gorgeous open area of traditional Norwegian style buildings, elevated terrain and paving, a fountain ripped straight from the franchise and even a canal complete with a jetty and boats.

Of course, the Kingdom of Arendelle is nothing without its palace, which will be found in the Frozen land with some royal guests inside. Just as Queen Elsa famously opened the gates in the movie, Disneyland Paris will finally allow guests to meet more characters from the blockbuster franchise, inside the palace itself! It is far too early to determine who will guests can meet within the walls of the castle but, given the location, I suspect two famous sisters will be around.

Further into the heart of the town is where you will find so much more detail everywhere you look. From the rocks surrounding the kingdom’s canal and lighthouse in the distance to the trees and benches dotted around guests will truly be transported to the beautiful location that is sure to be brimming with life and sound. In addition to a shop a new restaurant will also be found within the marketplace.

The main feature of WDS’ Frozen land will undoubtedly be the brand new attraction, found by the new area’s signature weenie the North Mountain. Measuring up at an impressive 40 meters it is sure to be a stunning sight both up close within Arendelle and from a distance at the far side of the lake.

Little is known as of yet about the attraction but its entrance will be a familiar sight to fans of the series. Found at the back of the town guests will begin their adventure entering the clock tower, the same one that appeared during ‘Love is an Open Door’ as well as the short Frozen Fever.

This is the first new information to come out about the Frozen land at Walt Disney Studios Park since the release of new concept art back in September of last year. The land is of course part of the €2 billion expansion of Walt Disney Studios Park which will see other additions including Avengers Campus and a Star Wars themed land along with a brand new lake as the new heart of the park.

❄️ And that’s our complete tour of the “Frozen Land” plans at Walt Disney Studios Park. The Land is expected to open in 2023/2024.
Here are some our favorite 3D renderings – for the details on each area, scroll up our feed and we’ll have a recap article shortly! #Frozen #WDS2 pic.twitter.com/5vC3OvYq3g

A massive thank you to DLP Report for sharing all of these fantastic images and information found on the upcoming Frozen land for Disneyland Paris. Be sure to check out their social media presence for a full look at the permit photographs.

As always, be sure to find me over on Twitter to discuss all things Disneyland Paris and the Walt Disney Studios Park expansion!