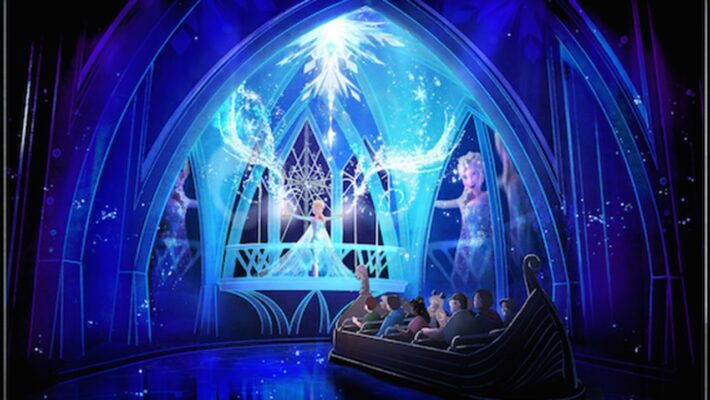 The headline new attraction that is set to be the flagship addition to the upcoming Frozen land will be a boat dark ride, according to official plans released regarding the project.

Earlier this week legal permits were unveiled which showcased a plethora of detail on the one of the most exciting parts of the Walt Disney Studios Park expansion. Along with a number of visual designs other information was confirmed such as the inclusion of a permanent meet & greet building and the height of the land’s North Mountain.

Once again, DLP Report are back with an exclusive look at plans for the attraction which will be housed and disguised within the mountain itself. These construction based prints do appear to show a track layout and vehicle system found in boat based dark rides, such as Disneyland Park’s very own Pirates of the Caribbean.

Those familiar with the Frozen franchise and it’s appearance in other parks will undoubtedly draw comparisons to Frozen Ever After in Walt Disney World. The dark ride, which replaced Maelstrom in the Norway pavilion at Epcot, sees guests journey by boat through an adventure with Elsa, Anna and others all throughout Arendelle.

Despite the striking resembalance in ride system, this by no means is confirmation that the Frozen land attraction will be a clone of the 2016 re-theme. As DLP Report themselves point out, the show building for this attraction will be much larger, potentially hinting towards something much grander and more unique.

While the layout looks similar to Frozen Ever After remember this show building is MUCH larger. Could the ride system also be closer to Shanghai's Pirates of Caribbean?

Other details which can be seen from the plans show both a standard and “rapide” queue (most likely Fast Pass) and that guests will exit the attraction by first ascending upon a flight of stairs. The store to be found within the Frozen land will also be a part of the attraction building, appearing at the end of the adventure for guests to explore.

For the latest news on the upcoming Frozen land, the attraction and everything else revolving around Disneyland Paris be sure to stay tuned here and on Twitter!