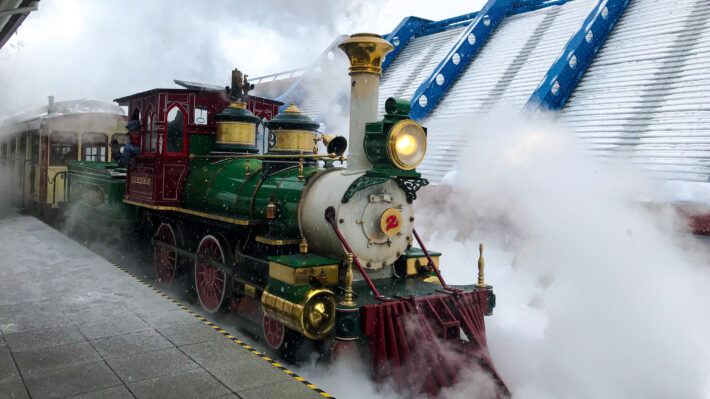 Disneyland Railroad, the iconic train around the resort’s main gate, will finally return after over 18 months of closure the same day as the rest of the resort on 15th July.

The attraction famously closed back in October 2018 and since has created a loyal and devoted following of fans eager to see the classic transport system return to operation in Disneyland Park.

Disneyland Paris is set to open its two theme parks again along with Disney Village and Hotel Newport Bay Club next week on the 15th July after several Cast Member and Annual Passholder preview events.

Coinciding with this will be the long awaited reopening of the Disneyland Railroad.

The return of such a classic and familiar feature to Disneyland Paris, and indeed almost every Disney Park in the world has seen unanimous joy from the fan community. Providing a scenic look of the most beautiful park on Earth, the railroad has often been seen as a pleasant and relaxing experience with a Grand Circle Tour being on the ‘to-do’ list for many each visit.

As of yet there is no information what – if anything – has been changed or repaired, maintained or added to Disneyland Railroad during its lengthy 20 months out of action. Given that the attraction faced several delays in returning due to other projects (such as the renovation and rebuilding of Frontierland Theater) it is likely the railroad was a low priority project and remained closed more out of feasibility rather than for work to be done on it.

One change that will be seen however is the introduction of the health and safety measures set to go into effect with the reopening of Disneyland Paris. Whilst on Disney property social distancing is to be practiced as best as humanly possible and face masks must be worn at all times; with the obvious exception being when eating.

The resort will also return to a limited capacity of guests and Cast Members, meaning it is likely the Disneyland Railroad will operate to a lesser crowd than it normally can or would. Although not yet confirmed it is likely seating compartments will be limited to one per party at all times with appropriate cleaning when necessary.

Disneyland Railroad will reopen along with Disneyland Paris on 15th July 2020.