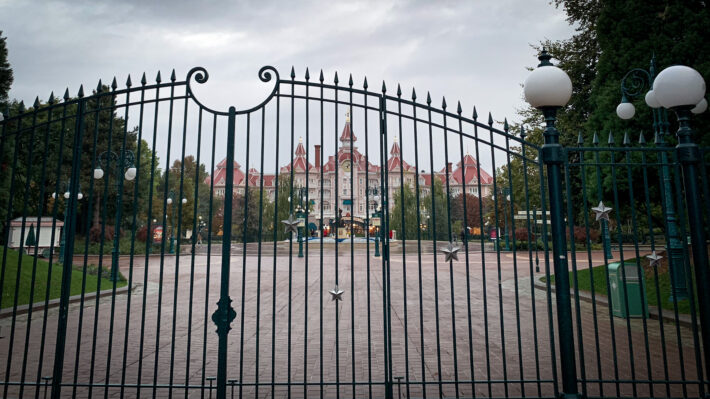 Disneyland Paris is to temporarily close for a second time as the number of infections from the global pandemic continues to increase, it has been announced.

French President Emmanuel Macron announced on Wednesday that all of France would enter a temporary lockdown. This means that all non-essential outlets, including theme parks, must close as should the public remain at home unless for absolutely necessary travel.

Guests currently in the resort will have until closing time on Thursday 29th October before Disneyland Park, Walt Disney Studios Park and Disney Village close their gates until further notice. The currently active onsite Disney Hotels will remain open until all existing guests have checked out, but will not be accepting any more bookings at this time.

The resort is however hoping to re-open for a short period of time for the Christmas holidays and will be taking reservations between 19th December – 3rd January. This small return window will be entirely dependent on the latest health & safety conditions in France at the time as well as government advice.

Should a Christmas return occur for the resort, Disneyland Paris will then re-close again for the opening weeks of the new year, shutting its gates from 4th January – 12th February 2021.

This is the second time the resort has had to temporarily close due to the global pandemic and the second Disney resort in the world to enter a second closure. Disney made the decision to close DLP back in March along with all other resorts as infection rates continued to climb and remained out of action for over 4 months.

Disneyland Paris famously re-opened its doors to a limited capacity back in July with a number of health and safety measures implemented to ensure Europe’s no.1 tourist destination was safe to visit for both guests and Cast Members alike. Although these measures have been successful the decision was made to close both parks, Disney Village and all Disney hotels.

Guests with an existing booking for Disneyland Paris are being urged to visit the official website for more information on modifying or cancelling their trips. It is currently unknown how long the resort will remain closed as no opening date has been identified.

*depending on status of global pandemic in France and government advice.

As always, stay tuned here and on my Twitter for all the latest news as the resort enters its second temporary closure.