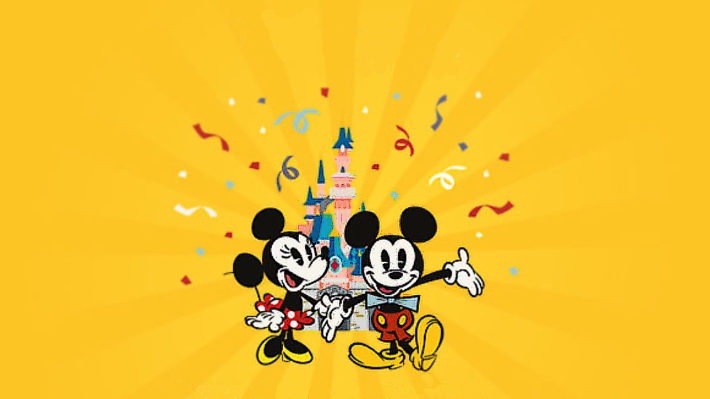 Disneyland Paris has unrolled the red carpet to celebrate the 91st birthday of iconic mascot and character who started it all, Mickey Mouse.

Seasonal Christmas shows included a special mention to the main Mouse’s big day while a special pre-parade partied along to a famous song from last year. Ending off the birthday celebrations was the return of a beloved projection show just before Disney Illuminations.

Mickey Mouse made his first ever appearance on this day 18th November 1928 alongside his beloved Minnie in the iconic Steamboat Willie. The popularity of which helped catapult the still new Walt Disney Studio into the mainstream and over the past 91 years became one of the most iconic, influential and success names in entertainment.

To mark the special anniversary of this day, a series of suprises were sparkled all around the park to help wish Mickey & Minnie a happy birthday. The unique birthday cupcakes that fans may remember from last year’s World Biggest Mouse Party made a return to each of the five lands in Disneyland Park. Unfortunately the five Cupcake Sisters (the creators of said cupcakes) weren’t in attendance.

Over in Walt Disney Studios Park the two seasonal shows running this Christmas period saw slight additions to mark the special occasion, with both #SurpriseMickey and Mickey’s Christmas Big Band wishing the main Mouse a Happy Birthday towards the end of their performances. The latter of which providing a full rendition of the iconic song we’ve all sang before.

Just prior to the daily performance of Disney’s Stars on Parade, a special pre-parade danced its way along the parade route. Regular visitors to Disneyland Paris may spot the original ‘power couple’ were transported along in the modern Guest Star Tuesday tricycles while accompanied by the same fantastic dancers found during the Mickey 90 Mouse Party Annual Pass Night.

Topping off a busy but very celebratory 91st birthday, Sleeping Beauty’s Castle saw the return of a fan favourite projections show just before Disney Illuminations. Originally seen during the World’s Biggest Mouse Party last year the short segment celebrates the history of Mickey & Minnie, from their first appearances aboard that steamboat all the way to today.

Where you in Disneyland Paris to celebrate Mickey’s 91st birthday? What was your favourite surprise from the day’s celebrations? Be sure to let me know over on Twitter!