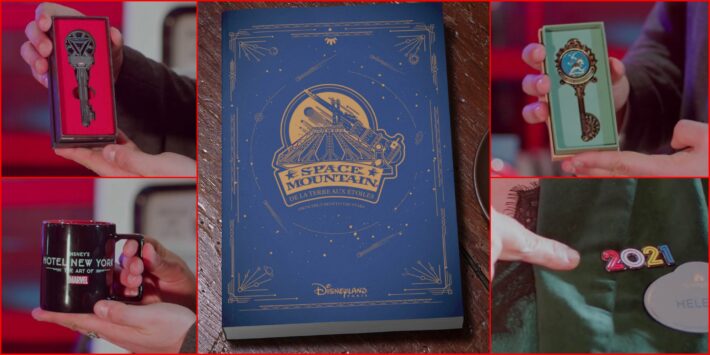 Disneyland Paris merchandise is about to step up a gear with the unveiling of several new pieces and ranges lined up for a 2021 release when the resort re-opens, including several collectors items.

While the parks may be closed at the moment until February the magic never leaves the resort and this was all too true with the recent InsidEars Christmas show which premiered exclusive for InsidEars members. At the virtual event we were treated to some first looks at projects and plans for the resort in the coming year.

Hosted our ever energetic and fan favourite Ambassador Giona, members also got a look at some brand new Disneyland Paris merchandise scheduled to release throughout next year.

A staple to every DLP boutique, the annual year range is always a popular one with first time guests and regulars alike looking to immortalise their holiday with a reminder of the year they visited the beloved Parisian parks.

For the 2021 edition of this traditional line, a very clean design has been selected taking inspiration from none other than Mickey Mouse himself. So far a lanyard and two pins have been shown but you can no doubt expect a whole host of other products to appear in the New Year including t-shirts, mugs, picture frames and more.

Opening to the public in 1995, this year actually marks the 25th Anniversary of the iconic rollercoaster Space Mountain – de la terre a la lune. However, given the resort’s extended closures as well as all the other disruptions which occurred through 2020, the celebrations have been put back 12 months.

To commemorate the silver celebrations of this beloved attraction and true beacon of Disneyland Paris, a limited edition key will be released as part of the attractions key collection. Not only will the box feature the original logo for Paris’ Space Mountain but the key itself includes some excellent nods and references to the Jules Verne inspired attraction.

That isn’t all, though! Also set to release to mark this milestone will be the third entry in the very popular attraction books, this one of course dedicated to all things Space Mountain. These books have become very popular with fans from all over the world and offer an in-depth look at iconic DLP attractions including information and images never before seen. You can read my review of the previous attraction book to release, Phantom Manor Decrypted here.

Though just an artist’s rendition of the cover, we seem to also have a hint of the book’s title, or at least working title: Space Mountain: From the Earth to the Stars.

Next year will mark the long awaited opening of Disney’s Hotel New York – The Art of Marvel, the very first Disney hotel to be inspired by the comic book giants and the magnificent art that goes into their stories.

As with most additions to Disneyland Paris, the hotel will welcome guests with a full merchandise line ready to go in the on-site shop, ready to commemorate your stay in the Art Deco rooms and celebration of 80 years of artwork. Among the range will be lanyards, mugs and photo frames with a limited edition collector’s key also set to release. This will be the first hotel to feature in the attraction keys collection… other than a certain Hollywood Tower Hotel.

The standout item in this collection however has got to be the gorgeous Iron Man scale statue. The figure will be a miniature re-creation of the iconic suits worn by Tony Stark in the Marvel films, TV shows and comics as well as based on the very suits guests will see displayed within the hotel lobby.

These Disneyland Paris merchandise items may be too far away from appearing on our Christmas wish lists this year, but this small showcase confirms we have a lot of too forward to wishing over and maybe treating ourselves to when the time comes. No prices for any of the products have been announced at the time of writing but as always be sure to keep an eye out here and on my Twitter for all the latest news as and when it happens.