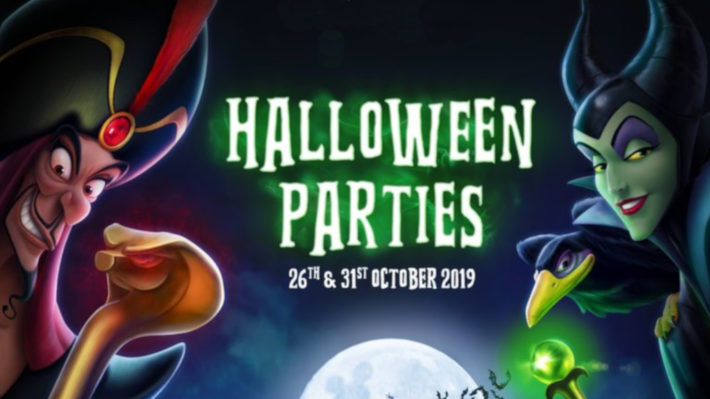 Disneyland Paris Halloween parties are always a special and very popular event on the resort’s calendar, and this year looks set to be no exception. First details and announcements have been released regarding this year’s ghoulish parties which take over Disneyland Park from 8pm until the small hours of 2am in the late October night.

With several brand new features announced along with the return of many fan favourites, 2019’s entries promise to be the ultimate send off to another spooky harvest after a month of fun.

Often an unwelcome ghoul to fans’ Halloween preparations, Disneyland Paris Halloween parties have always been restricted to a sole event on the 31st October. While other resorts such as Walt Disney World would spread out the crowds by holding the same event multiple nights throughout the season, Paris stayed traditional with the single event. Often to the determent of guests with a crowded night and unrealistic goals should the even fall on a weekday.

At last, fan demand for more has been answered as this year’s Halloween party will take over Disneyland Park on TWO separate nights. Guests now have the choice of Saturday 26th October and Thursday 31st October to attend the spook-filled extravaganza.

The Goof Troop are back to bring some musical fun to Discoveryland in the Goofy & Max Spooky Space Party. Throughout both nights the father and son duo will be playing a number of his songs in a disco environment to get the dance party started.

From midnight onwards, the pair will be replaced with a famous DJ from the real world of music to carry in the festivities in the land.

Frontierland has recently seen a resurgence in Halloween decoration with the beautiful Dias de los Muertos inspired decorations. For this year’s parties things will be stepped up a gear as this part of Thunder Mesa plays host to its own music dance party.

A real world DJ will take charge of the music as the Land of the Dead Festival kicks off throughout both evening. Keep your eyes peeled as you may come across from lively (or not so lively?) encounters while there.

Are you Brave Enough? with special extras

Last month it was revealed that Disneyland Paris Halloween 2019 would see the addition of a brand new stage show on the Castle Stage. It has now been confirmed that this new set piece, which will feature famous villains such as Jafar and Maleficent alongside the Sea Witch Ursula, has been named Are you Brave Enough?

For the Disney Halloween parties, guests can once again enjoy this brand new show but with the addition of a brand new scene, exclusive to the special event nights.

This is always an excellent opportunity to experience the beloved Halloween cavalcade in a total unique way and unlike anything you will see during the reason of the harvest season. Even better, the villains are so proud of their nasty work the parade will run twice during each party!

Project mapping is the current crazy of Disney Parks technology and its easy to see why. From Disney Dreams! to the superb effects from Phantom Manor’s reopening the illusion can create some stunning, creative displays right on iconic views unlike anything guests have seen before.

In honour of the Disneyland Paris Halloween parties a brand new projection mapped sequence will feature on Skull Rock. This is sure to help tone the atmosphere and immerse guests into swinging wake of the evening.

What would a Halloween party be without some guests of honour? This year the Disneyland Paris Halloween parties will once again welcome the opportunity for guests to meet & greet with several Disney characters and villains, some for the very first time!

Phantom Manor’s recently added character meet location has already seen a lot of success both with Mickey Mouse and the Pumpkin King Jack Skellington using the locale before. For these exclusive parties Jack will be joined by his beloved Sally to meet guests under the gazing loom of Ravenswood Manor. Although their identity is a mystery for now, we can also expect another character from The Nightmare Before Christmas, set to make their Disneyland Paris debut.

Elsewhere in Adventureland, notorious pirate Captain Jack Sparrow will once again be lurking throughout to pose for a photo or two with guests. Fuente Del Oro Restaurante will also see the return of the superb Miguel puppet, inspired by the star character of Pixar’s Coco.

And that’s not all… even more characters are expected to descend upon Disneyland Park for these two nights of grim grinning and socialising. Who would you most like to meet during one of these evenings?

This year’s Disney Halloween Party will run from 8pm – 2am in Disneyland Park. Tickets are now on sale for both dates of the event.

Are you excited for this year’s Disney Halloween Parties? If you are planning to attend which date are you opting for? I’d love to hear your thoughts so be sure to let me know over on Twitter!