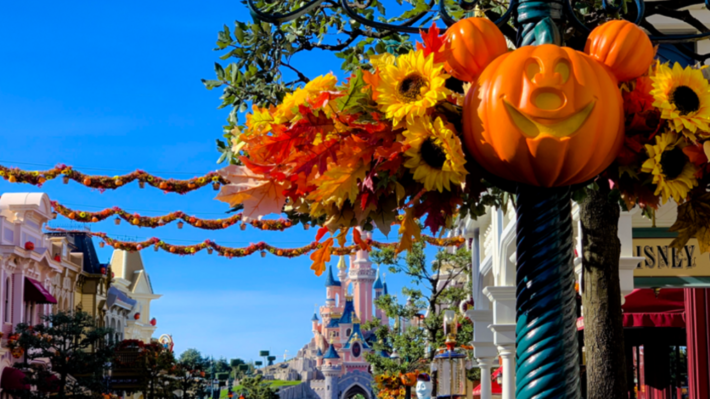 It’s that time of year again, Halloween! One of my favourite times of year for so many reasons but none ever more prominent than Disneyland Paris’ annual festivities to all things spooky and Autumnal. Several Halloweens have past since I last got to experience the latter months of the year in the resort with 2015 being my last October visit. That, paired off with the questionably lackluster outing of last year had put my expectations sky high. It’s rare for this to happen, but my hype was matched.

Ever since the relaunch of the season in 2013 Halloween at Disneyland Paris takes a more harvest approach in park decoration. Main Street U.S.A. is back to the gorgeous oranges and browns of the Fall with traditional pumpkins dotted all over. Entirely new this year are the beautiful garlands that run all the way down, emulating that of Christmas. These are a joy to behold in person and just look more picturesque as darkness falls and their lanterns start to shine 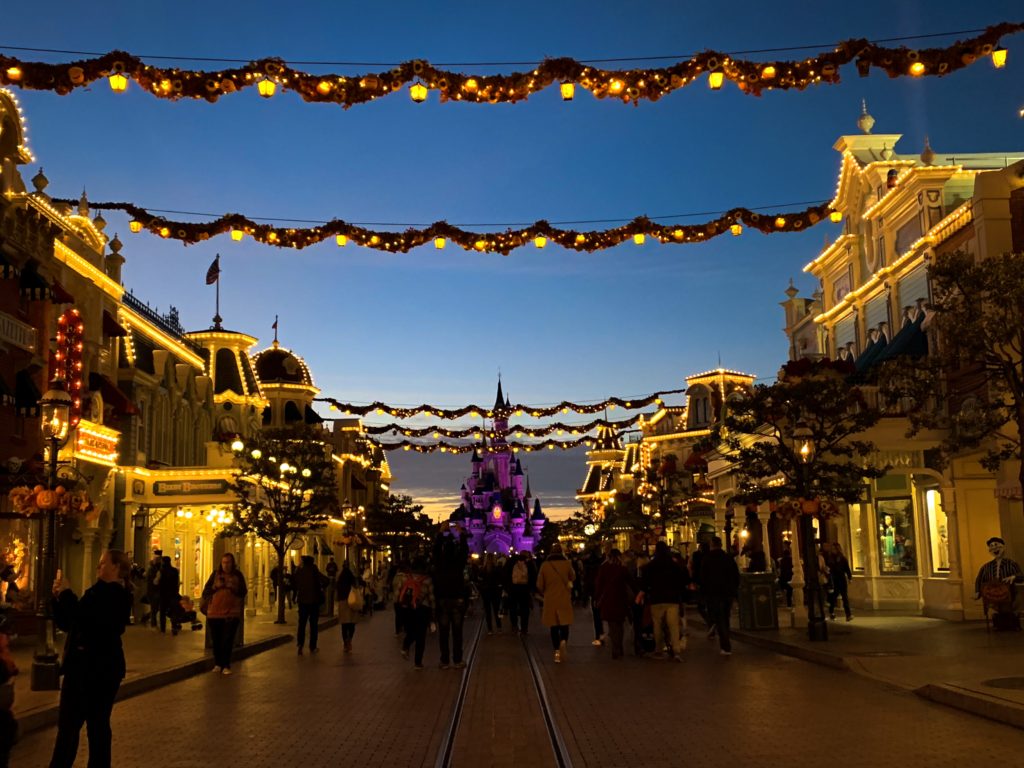 While certainly not a blink-and-you’ll-miss-it level of subtle, the decor compliments the stunning land and adds that little extra bit of spark during the poorer weather conditions.

Elsewhere in the season’s other popular locale, Frontierland has once again gone to the pumpkin men and women though fortunately not to the extent of Halloweenland of old. The true talking point is the return of the Coco and Dias de los Muertos inspired fittings found near to and beyond Fuente del Oro. Beautifully bringing the Mexican holiday into Disneyland Park for a second year, these decorations stand out greatly while remaining Disney fitting. Should you be in the land this season you simply have to visit here at night. The neon lights bounce off the warm lantern glow for some truly juxtaposed beauty. 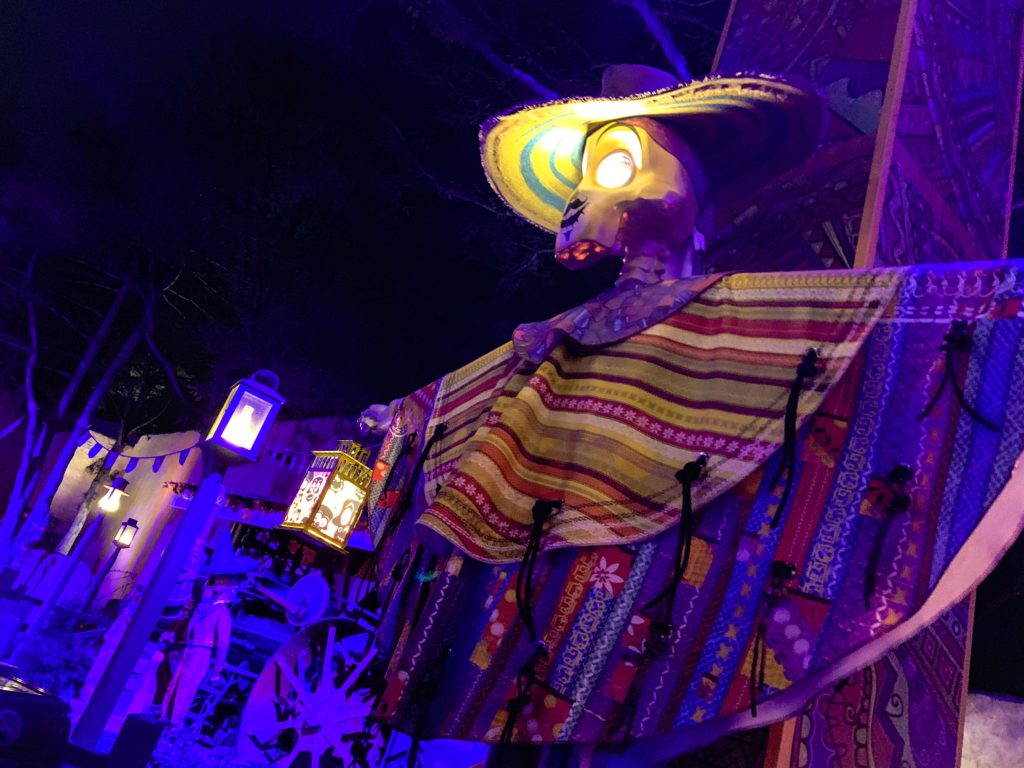 The flagship element of the harvest focus Disneyland Paris Halloween. The fan dubbed ‘ Halloween Cavalcade’ quickly became a firm favourite when it was first introduced. After taking a break last Autumn for the 25th anniversary the roars of Vive la Vie are back for its fifth anniversary and better than ever.

Loosely tying into the 90th birthday of Mickey and his World’s Biggest Mouse Party is the addition of a brand new float and accompanying dancers. Mickey’s Illusion Manor takes great inspiration from Frontierland’s Phantom Manor (though not a representation) and brings a spook-filled flavour to the festival parade. Though I have always been a fan of the parade being bold and straying from the norm, this will appease many who always wanted a spooky cavalcade. 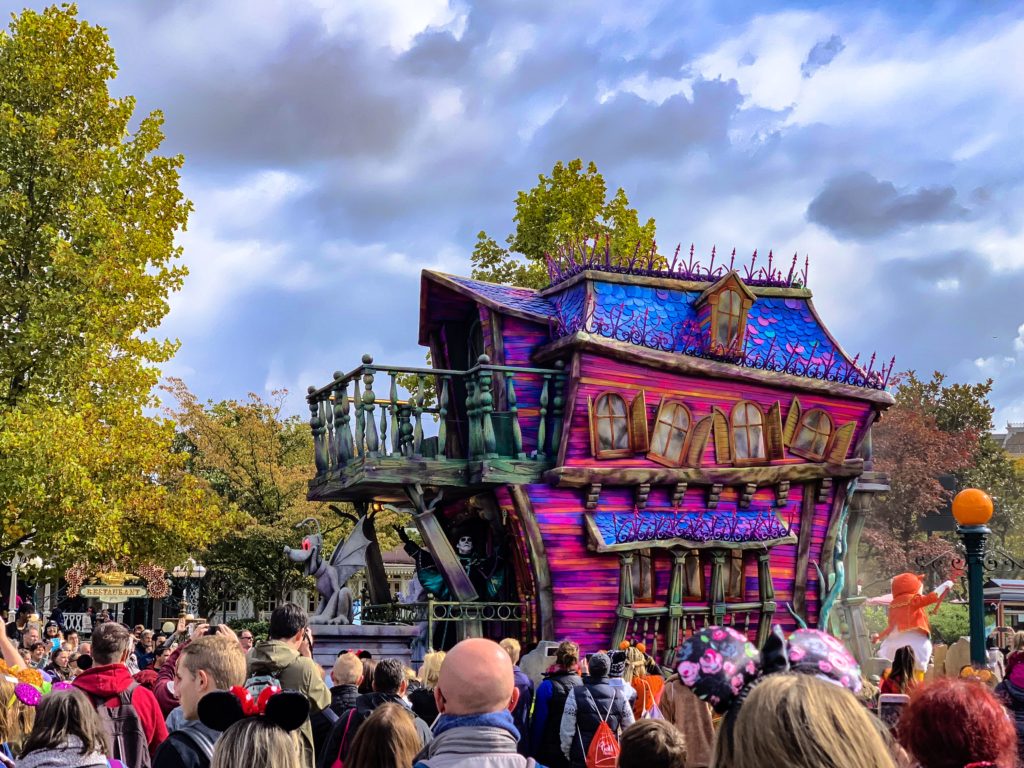 The float itself is magnificent. Clearly inspired by classic horror mansions such as Phantom Manor, Illusion‘s brightly coloured, cartoonish design fits perfectly in with the warmth and energy of the other floats. The dual balconies and front door lookout brings a fantastic new concept too as Mickey (donning THREE different outfits) and the haunted newlyweds sporadically pop in and out as the spirits guide them. Of course, you can’t have a Disneyland Paris Halloween cavalcade without the Duck nephews. as Huey, Dewey and Louie can be found at the back in the parade’s new closing.

I love Mickey’s Illusion Manor. It’s a fantastic addition to another fantastic seasonal parade. But it isn’t even the best improvement 2018 has given us to the show.

As our cavalcade makes its way to Central Plaza, things take a twist when all four floats stop as a series of dancers and characters take to the – still new – planter stages for a brand new song and routine. Credence must be given to the beloved Pirates & Princesses for starting this trend of show stops in front of the castle but here is where it has been perfected.

By watching the ghostly bride and groom or Mickey and the ghoulish wedding guests, you can truly appreciate how this has completely changed the game for Mickey’s Halloween Celebration. The routine is fast and almost hypnotic, the energy electric. Partner that with a fantastic new, original song and you’ve got a show segment you will not want to miss once. This could easily be an entirely new show in its own right. 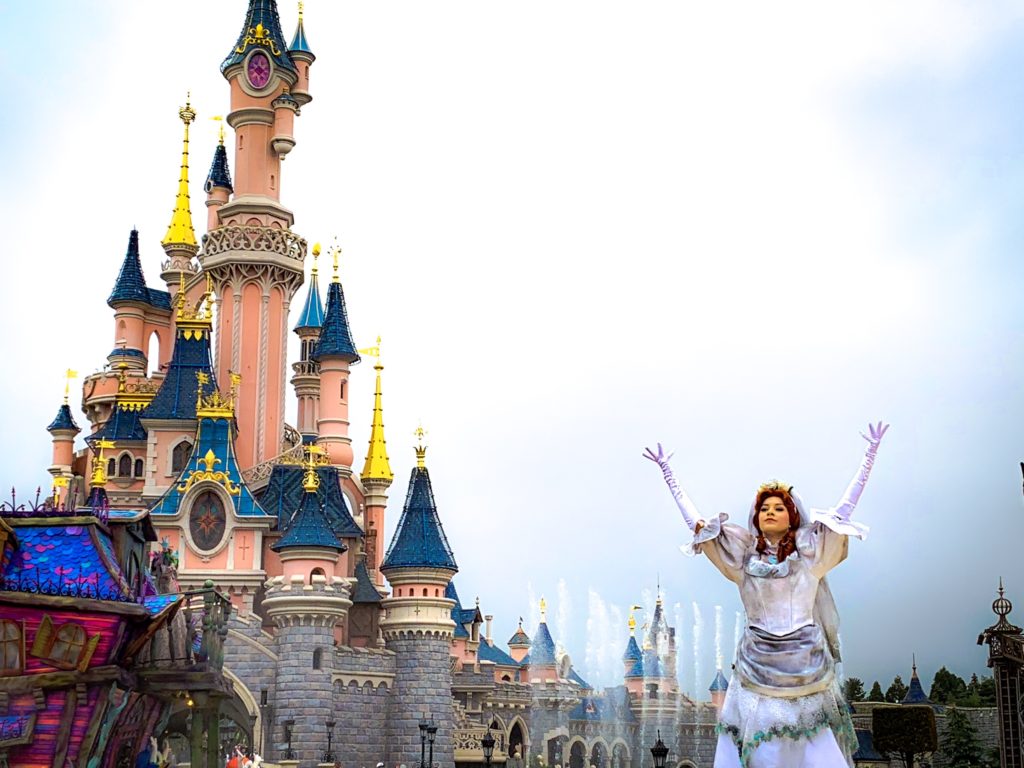 It’s Good to be Bad

My last Halloween visit to DLP in 2015 saw the debut of a new show onto the castle stage. It’s Good to be Bad with the Disney Villains was a major disappointment and I didn’t hold back in explaining why 3 years ago. Since then changes and improvements have been made to the show but here was my first proper exposure to it since it all started.

This is an entirely different show to the one that fell flat on its face in ’15. Gone are the pointless Maleficent voice-overs and nonsensical twirling and in is a party of nastiest, most evil characters to grace animation. Perhaps most interesting is that although all are listed as It’s Good to be Bad, there are actually two very different versions that alternate back and forth between showings.

The first one is fun and lightyears above its original version but pales in comparison to the lively, funny and more animated second edition; featuring one Donald Duck in his Maleficent outfit. 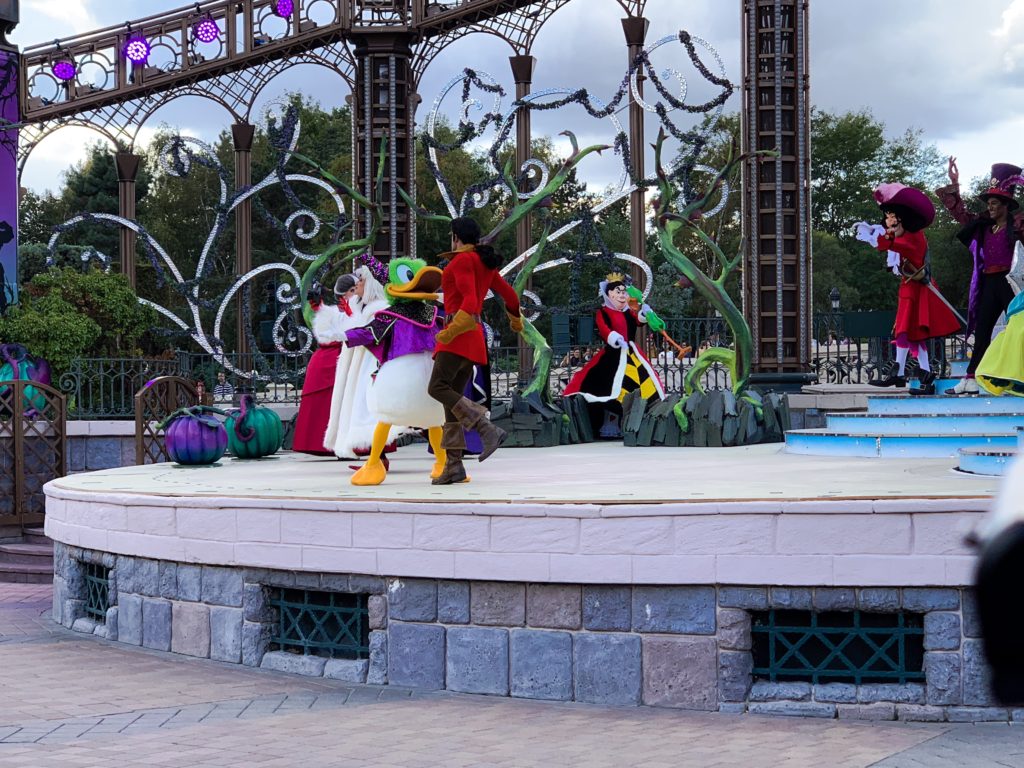 My advice would be if you are waiting to watch one show, you may as well hang around afterwards for the second. Performances are usually pretty close together making it a manageable gap between shows. Plus you can make time to meet some of the Disney villains who continue to pose with guests after the show has completed.

What would Halloween at Disneyland Paris be without characters? As is tradition a plethora of famous faces are out for guests to meet and pose for a photo with this October. Favourites like Stitch, Jack Skellington and the Disney Villains (minus a wretched Old Hag) can be found in or around their usual meeting spots. Additionally are the recent inclusions of the Cheshire Cat and famous Mouse couple donning their Mexican inspired outfits.

New for 2018 is the long awaited return of rare but cult favourites Jose and Panchito of the Three Caballeros fame. They are without their third amigo however as Donald has prior engagements on the castle stage, joining the villains to meet in his new costume. 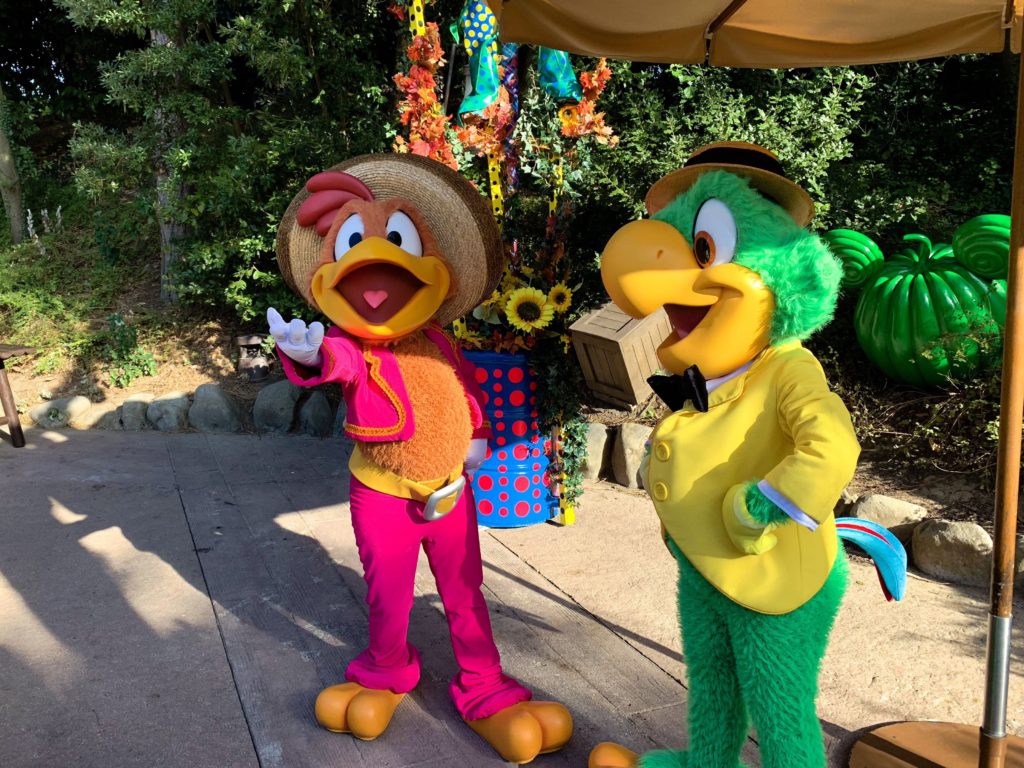 Which brings me on to my only, but a massive, criticism of this year. The meet segment of It’s Good to be Bad is still a crowd scrum mess. Without any sort of queuing system and sheer reliance on the character and their assistant to keep order we have an experience full of pushing and shoving where you can spend the entire set in the front row and still fail to meet the character. This was problem that has plagued previous years and a solution needs to be found; whether that be dedicated queuelines or a meet & greet set up elsewhere.

A Disneyland Paris Halloween has always been one I’ve regarded in high quality. While not everyone agreed on the harvest focus of the past or felt that content was lacking in comparison to others I feel virtually all doubts have been quashed this year.

From just a two day trip, the October season managed to surpass all of my expectations and firmly place itself as my favourite DLP trip of the year so far. Even with the scrum issues that continue to haunt we truly have a season to rival the immersive mammoth that is Christmas. This is a season that rewards repeat viewings of its entertainment. Ensuring you hit every time on the park programme allows you to see the cavalcade from a whole new angle (literally) or experience an entirely different show on the castle stage.

It is also a season that rewards exploration. By venturing beyond Main Street U.S.A. Halloween continues and you will find not only new and unique decorations but seasonal characters to boot. Where this summer’s Marvel outing fell victim to a claustophic Production Courtyard, Halloween widens in footprint to truly feel special.

With absolutely no hesitation I can say this is, by some distance, the best Disneyland Paris Halloween season ever.