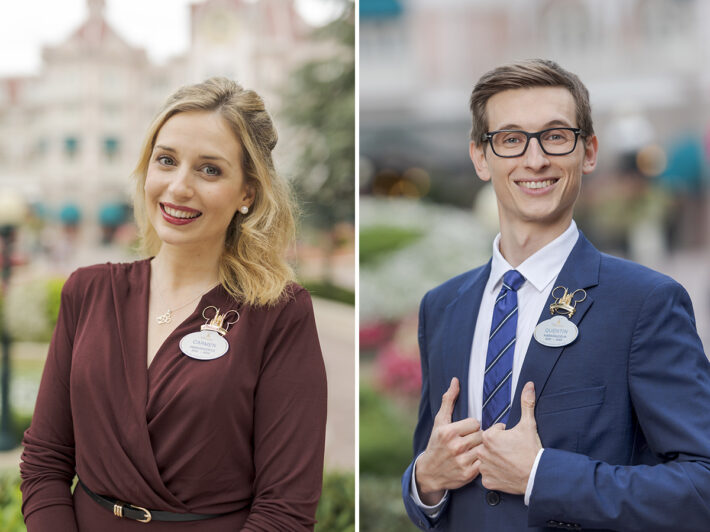 The one of the most lucrative and symbolic positions in the entire resort, DLP Ambassadors represent Disneyland Paris and all of its ventures to guests, investors and the wider world. This includes their appearances at Disney events all across the globe and their own contributions to help spread resort magic all over the globe. The Ambassador Program has ran since 1965 and sees representatives from each Disney resort including the Hawaiian location Aulani.

After a thorough selection process which included interviews and workshops, Carmen and Quentin were selected as the best pair for the role to help take Disneyland Paris into the 30th Anniversary and beyond.

Originally from Castellón de Plana in Spain, Carmen joined the company in 2011. She began her DLP career during the high seasons in Food & Beverage, notably at Plaza Gardens Restaurant, and as an Attraction Hostess at flagship attractions such as The Twilight Zone Tower of Terror and Peter Pan’s Flight, giving her an excellent knowledge of Park Operations. Since 2018, Carmen has been working for the digital teams in the Contact Center, where she exchanges daily with future Guests to inform them and help them prepare for their stay, sharing the magic and desire to come to Disneyland Paris.

“For me, Disneyland Paris is above all my family story. My parents are also big fans of the resort, and we used to come here very regularly. Working at Disneyland Paris was more than a dream, it was the logical next step in my career, and today, even my little brother works as a Cast Member during the high seasons!”

Quentin, originally from Yvelines, holds a dual degree in Engineering, part of which he completed at the University of California, Berkeley. Having a six-month experience as an Attraction Host at Walt Disney World Resort in 2015, he joined the Show & Ride Engineering teams at Disneyland Paris as a Mechanical Engineer in 2018.

“Disneyland Paris is the company that made me want to become an Engineer. I knew that I wanted my work to contribute the emotions felt by our Guests. I’ve always been very curious, and when I was younger, I wanted to understand how the attractions at Disneyland Paris worked.”

The appointment of new Disneyland Paris Ambassadors of course means an end for our current one. The resort’s current ambassador, Giona Prevete, will continue for the rest of the year before likely moving back into another Cast Member role. Gio will also spend the next few months training the new recruits for their two year adventure.

A massive congratulations to both Carmen and Quentin on this magnificent role and I wish the very best of luck in the position. I would also like to extended a big thank you to Giona for all his hard work over the past 3 years and wish him all the best in whatever his next venture may be.

Carmen and Quentin will officially take over as Disneyland Paris Ambassadors on 1st January 2022.