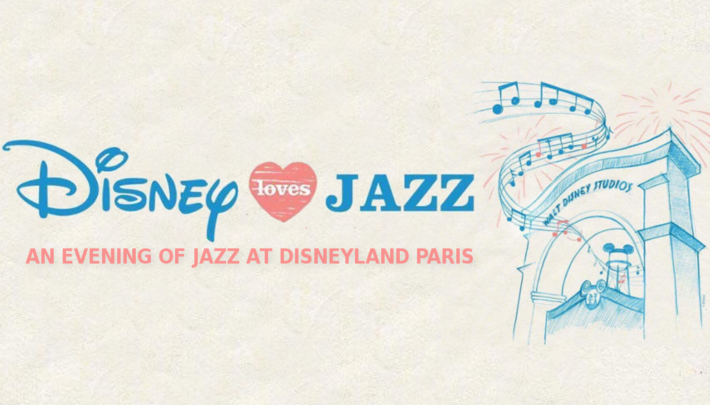 Music has always played a massive part in the magic of Disney. Through the iconic pieces of the Sherman Brothers and co., the modern classic by the likes of Menken and Manuel, or the world renowned park themes, it’s impossible to imagine virtually anything related to the Mouse without an accompanying soundtrack. This aspect of the Disney experience has become so integral its spawned its own sub-genre of variations on classic songs. Search online and you’ll inevitably find alternates of film pieces in heavy metal, electro-pop and my personal favourite, jazz.

The connection between Disney and jazz music has been one growing from strength to strength in recent years. Most famously perhaps with the release of the two Jazz Loves Disney albums which saw critical success among casual and hardcore fans. I was – and still am – a massive fan of these album so when I learned that Disneyland Paris would be hosting an entire event inspired by Disney and the music genre, I knew I had to be there.

As the months of waiting turned to weeks, I admit concerns did start to creep into my mind. Concerns mainly founded upon by a night in July. The disastrous Marvel Annual Pass night and its entire neglect of its core theme left me very worried as to how a jazz night would be handled. Will this truly be a night celebrating the long marriage between Disney and jazz, or just another excuse to wheel out rare characters to keep the fans happy? 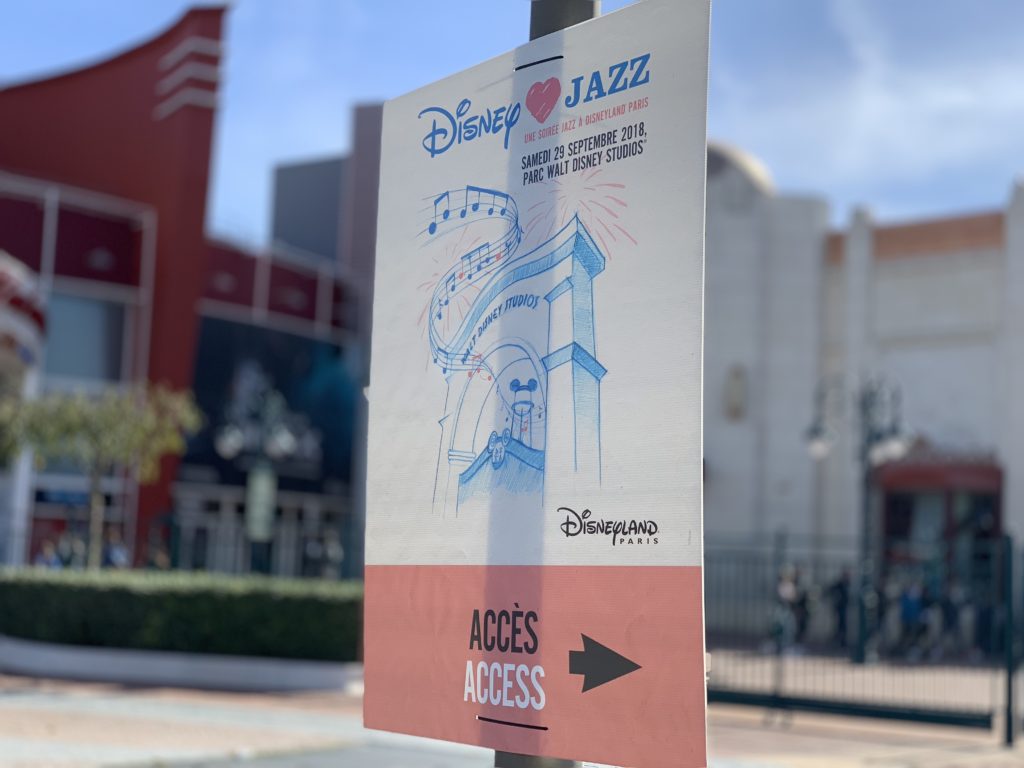 Entering Walt Disney Studios Park at 8pm on the night of the Soirée, guests were welcomed with a live jazz performance right in the heart of Front Lot. This was just one of many opportunities to hear the smooth beats of the classic genre as bands played all throughout the party well until midnight. This was perhaps most welcomed in some of the more aesthically pleasing parts of the park such as Place des Remy and Hollywood Boulevard. Guests could take advantage of the soon to end Rendez-vous Gourmand while enjoying some beautiful arranged music fitting in with their setting.

Guests who paid extra for the premium ticket were rewarded to an exclusive concert inside the Moteurs… Action! stage. Dubbed the Jazz Loves Disney concert, the hour and a half show was a musical showcase of some of the very best both album have to offer from some new and familiar faces to the pieces and the world of jazz.

This was the true big deal for me, and the main reason I jumped at the opportunity to attend the night at all. Thankfully I am very happy to say I was not disappointed and the concert not only met but surpassed all expectations I had. From the opening hybrid of Steamboat Willie and When to Wish Upon a Star it was clear that the show had been arranged and songs selected with Disney and jazz fans both in mind. The show was an inclusion of the biggest and best classics as well as those that perfectly translate into the genre.

Anyone familiar with the Jazz Loves Disney albums felt right as home listening to the likes of Hugh Coltman and Selah Sue sing the hits you’ve hit repeat on so many times before. The concert wasn’t afraid to experience however as Myles Sanko strayed from the norm to give us renditions of Beauty and the Beast and Someday my Prince will come. Two songs best known for having female vocalists, the gender role swap as well as the funkiness of jazz gave us two truly unique versions I won’t be forgetting in a hurry.

Another stellar performance, this time of ‘Someday my Prince will come’ #DLPlive #DisneyJazz #jazzLIVE pic.twitter.com/aWsfSt1pOL

For me the true highlight of the concert was the magnificent China Moses and just about every time she took the stage. Getting the entire audience up on their feet for Zootopia’s mega upbeat Try Everything as well as her album signature piece Why Don’t You Do Right perfectly captured the variety the jazz genre can bring along with complimenting the original pieces. Indeed, I would go as far as saying I prefer these new covers over those found in their respected movies.

My only gripe from the concert would be that the entire show was presented from start to finish in French. Normally I wouldn’t have a problem with this but given the popularity of the Jazz Loves Disney albums with the English speaking Disney community (along with most of the performances being in English) a 50/50 split would have been nice. Our presenter did seem charismatic and went down well with the percentage of the audience who could understand him. It’s just a shame not everybody could enjoy his quips and jokes. 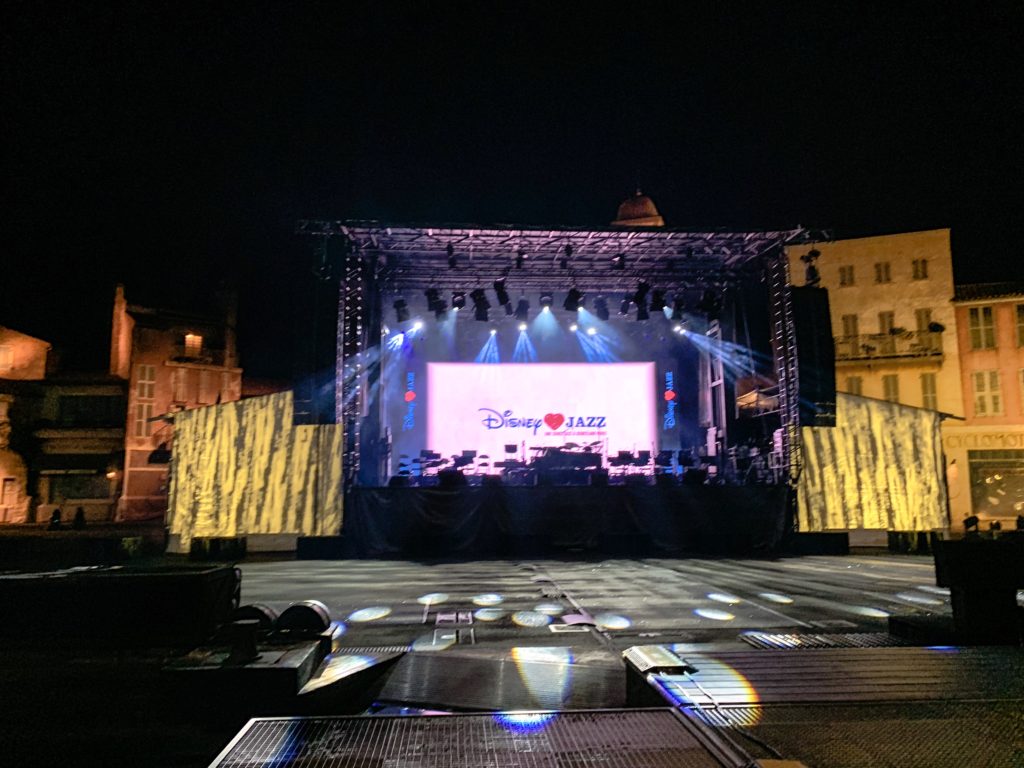 Music wasn’t the only thing on offer at the Disney Loves Jazz Soirée. As already mentioned this summer’s Rendez-vous Gourmand was available but the main non-musical attraction to those in attendance was the characters.

It seems to become somewhat of a staple for Disneyland Paris to use these events as a way to capture character fans’ attentions, and wallets. Anytime a private event or Annual Pass night has underperformed, rare or debuting characters are announced to help shift ticket sales. This was very evident in my last venture into hard ticket events and left me worried if appeasing that part of the fandom mattered more than providing a quality themed night.

Lessons it seems have been learned as, brilliantly, every Disney character meeting guests at the Disney Loves Jazz Soirée fitted the core theme in some description. The likes of The Aristocats, Roger Rabbit and Tiana and co. obviously have strong jazz backgrounds within their respected properties making them obvious candidates for the night. The Incredibles and Oswald & Ortensia on the other hand are tied into the golden age of jazz era one way or another through setting or creation.

As character rosters for a themed night go, this was by far the best. Every meet revolved back to the core jazz purpose of the soirée which gets a massive thumbs up from me. The night also finally gave me opportunity to meet the one and only Oswald and his beloved Ortensia. It felt good finally stroking my dream character meet off the list! 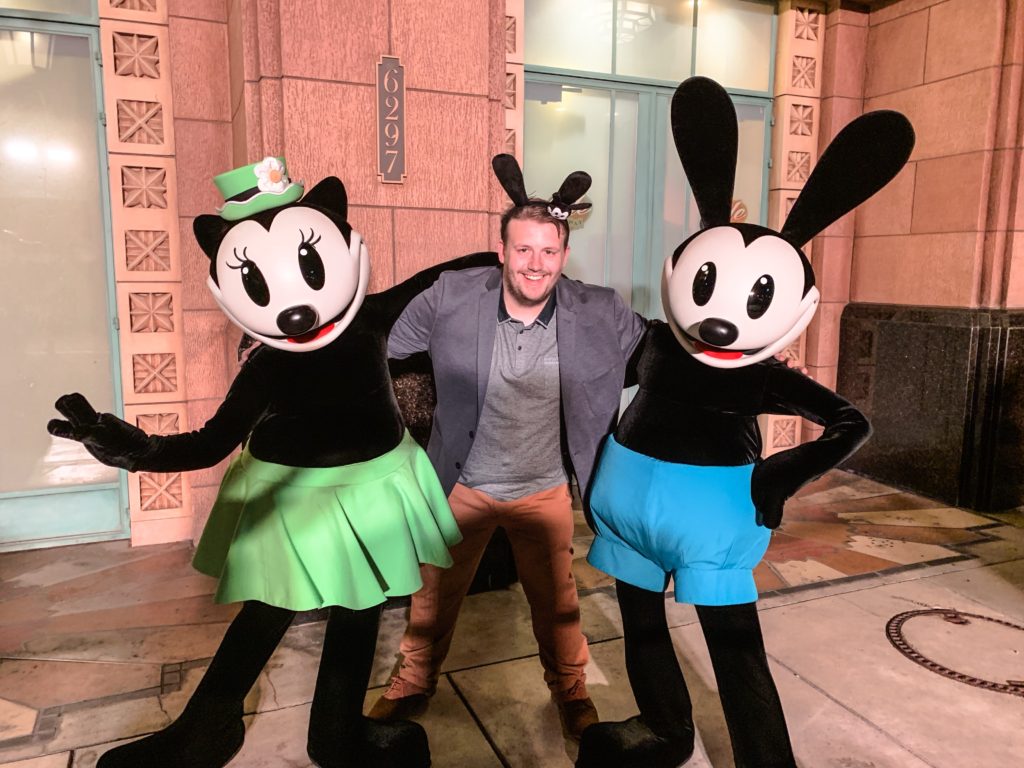 The other character meets unfortunately I can’t give as much information on. With the Jazz Loves Disney concert beginning and thus ending late, tied with the bizarre timeslot right in the middle of the night, this gave next to no opportunity for those at the concert to meet characters.

Managing to make it into Walt Disney Studios Park at 8pm on the dot, I was very fortunate in grabbing an early space for Oswald and Ortensia. By the time the concert had finish gone 11pm, all of the character queues had closed. Attempts to meet Mickey and Minnie in their suit attire as well as The Incredibles were met with cast members informing me they are no longer taking guests to queue.

For the final hour of the Disney Loves Jazz Soirée, unless you are interested in attractions, there was nothing for premium ticket guests to do. The focus of the night may have been on the signature concert but when paying full price on a ticket, especially when paying the extra £20 for a ‘premium’ night, the bare minimum requirement should be the ability to do everything the night has to offer.

There were many ways this could have been avoided, but the clear and obvious one is over timings. The jazz concert’s start and end time (regardless of delay) ended up being placed in a time slot that caused the most possible disruption to plans. Holding it back for a midnight finish would have given guests at least another hour to meet character, hop on attractions and enjoy the other jazz performances of the evening.

Longer character sets or greater frequency of sets would have solved this issue, too. Personally I believe that if a character is stated to meet until a certain time on a programme, guests should be able to join the queue until that specified time. Not until around an 1 hour before.

When it comes to these themed hard ticket events the most important aspect of them it always the theme. They’re the first thing we hear about when they are announced and the reason why we plan entire trips to Disneyland Paris for them. After all, what’s the point in marketing a night towards a specific interest if that interest is then neglected? Fortunately lessons seem to have been learned and the Disney Loves Jazz Soirée was a night that not only delivered on its promises but went above and beyond to give the experience of jazz at Disneyland Paris.

It may have had problems, and there is certainly room for improvement especially with content timings, but this is a step in the right direction. After the massive misstep of the Marvel AP night Jazz has managed to make a big refooting back to the standard we expect. Should we get an encore for 2019, I’d definitely want to return down this musical lane.