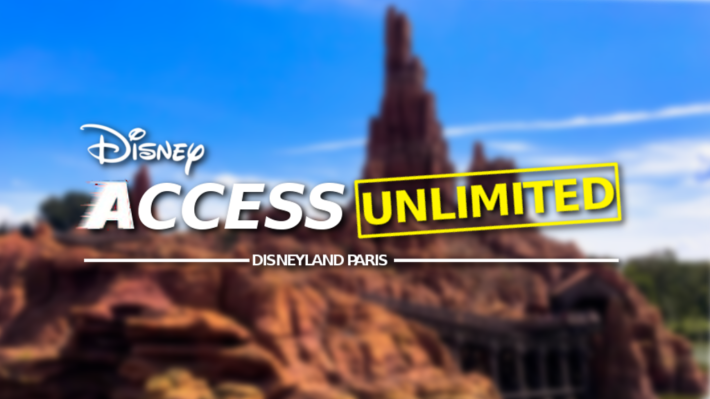 Announced rather suddenly without any fanfare, Disney Access One is the new companion product aimed towards casual guests during the busy summer period. Up until the end of September, those visiting Disneyland Paris have the ability buy instant access to the fast pass line of the chosen fast pass available attraction – decided upon by the location of where the pass is bought. For example, this means buying an Access One in Tower Hotel Gifts gives you one time access to Tower of Terror’s fast pass queue. The package also comes with a souvenir which is pretty neat!

The pass is best seen as a “time skip” of the regular fast pass system rather than as some new service. Much like mobile games you’ll find on your phone or tablet, you are buying for the chance to speed up your waiting time and have a fast pass already valid. Much like how games like Magic Kingdoms give users the opportunity to pay real money to immediately finish a task or construction. Guests are still completely able to opt for the free alternative of waiting for the assigned time before being allowed to enter the queue, so nothing is lost by the inclusion of this new product.

Much has already been discussed in great detail about whether or not Disney Access One is a good service or not. It may prove beneficial for single day guests, short of time in the July crowds. However the limit of it being single use – with a €15 price tag – was enough to turn most of the fanbase off the idea.

On the date of publish, Disney Access One officially goes on sale to Disneyland Paris guests. And while I have no strong opinions of it one way or the other, I do have an idea for the next logical step in the metaphorical ‘Disney Access’catalog. Something aimed directly towards attraction enthusiasts who want it all and willing to pay a premium for it: Disney Access Unlimited.

Just as how the new Access One provides guests with a single valid fast pass for a specific attraction, I propose a similar product except where the pass is reusable for the entire day of purchase. This would give, in theory, guests “Unlimited Access” to their chosen fast pass attraction.

This means lovers of Big Thunder Mountain have the chance to hop on the wildest ride in the wilderness at any time they want. It’s an opportunity for Tower of Terror fanatics to ensure their trips into The Twilight Zone aren’t dictated by return ticket availability. Most fun of all, it would spell opportunity to spend an entire day endlessly looping Star Tours: The Adventures Continue, ticking off each scene as you experience it. An idea I’ve dreamed of doing ever since the attraction re-opened last year.

This idea is almost exactly based on what I thought Disney Access One was going to be. I have always loved Disneyland Paris attractions and seen them as the core element to a Disney park experience, so I fawned over this when I first heard of it. Admittedly, I was disappointed to discover Access One literally meant access for one time, and not unlimited access to one attraction.

Some may recognise this idea not being so original or groundbreaking as it may seem. Indeed, this very product did once exist in the form of VIP Fast Pass. The only difference being it gave you a valid, ready to use ticket for any attraction within both parks as oppose to just one. I adored that little card whenever it was available to the public and was gutted when I learned of its discontinuation. Having the perk back, even in some sort of form, would be a big bonus to me on my summer trips. I have been told the VIP Fast Pass card does still exist but has been reserved purely for hotel suite and Castle Club guests. Should that be the case I’m totally okay with that as Access Unlimited would still be a premium product without the colossal premium room fee.

As for pricing, this would be key to the success of the entire product. Too expensive and you would alienate your core audience. Too cheap and you will end up filling the parks with extra guests in the fast pass queues; voiding the point of fast pass. Using Disney Access One’s €15 as a starting point, as well as the original VIP Fast Pass pricing, I feel a €49.99 – €59.99 range could work for an Access Unlimited product. A premium price for a premium product but not too expensive as to price out the fans but not too affordable to flood the market.

What do you think of my idea for an unlimited use version of Disney Access One? Are you a fan of the original product or would you rather see a return to the old VIP Fast Pass? I’d love to hear your thoughts in the comments below and on Twitter!