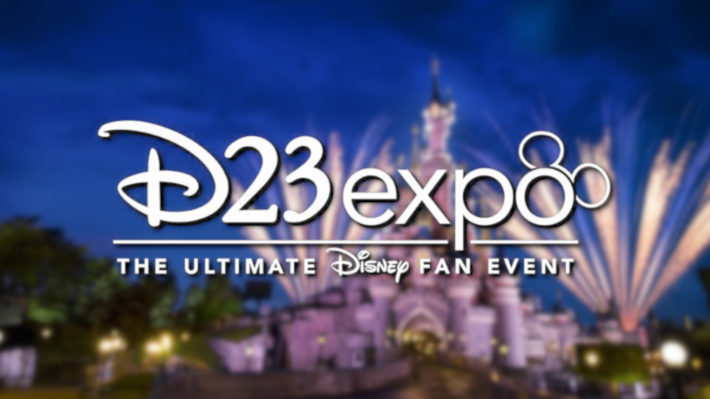 It’s that time again already, the D23 Expo 2019 is just around the corner! Dubbed the ‘Ultimate fan event’ and defacto Comic Con for Disney fans, the massive convention in Anaheim is the place to be for totally absorb into the world of The Walt Disney Company fandom. Whether you’re a lover of the classic movies, a Disney Parks veteran, a superhero loving Jedi or Walt history buff, you’re guaranteed not only to find something on the show floor for you but the opportunity to meet and interact with fellow, like-minded mega fans.

D23 isn’t just an exciting time for those in attendance. The expo is when the world media descends upon the Mouse and all its many branching arms as it prepares to unveil and announce a whole manor of upcoming future projects. In previous years we have seen announcements such as Star Wars: Galaxy’s Edge, entire Pixar release slates and even the world debut of the Frozen runaway hit song “Let It Go”.

With such a rich pedigree for major announcements (and the fact it comes just once every two years), anticipation has quite obviously been built for the 2019 iteration of this now famous convention. So, can we expect any Disneyland Paris news to come from the expo?

On the show floor of the Anaheim Convention Center from opening will be the Disney Parks – Imagining Tomorrow Today pavilion. Here guests will get a small preview of upcoming attractions and projects planned from Walt Disney Imagineering all throughout the world.

Then on Sunday 25th August is the traditional Disney Parks, Experiences and Products panel presented by the division’s chairman, Bob Chapek. A full conference dedicated to just the goings-on of Disney theme parks and resorts this is the panel that had previously saw reveals such as Galaxy’s Edge, Pandora, Mickey & Minnie’s Runaway Railroad and, in DLP’s case, Hotel New York – The Art of Marvel.

This is no doubt all very exciting, but let’s not get too carried away just yet. It is important to keep our expectations in check before going in to the Parks panel and indeed the expo as a whole.

While D23 is a celebration of everything Disney from its conception to today, it is in the majority of cases an American focused event. This means the vast majority of news and revelations likely to come will be on Disneyland Resort and its national cousin Walt Disney World. The latter of which I suspect to dominate the panel with its 50th anniversary just around the corner in 2021.

This is something that keeps in line with previous D23 expos so it shouldn’t come as a major shock should the Disneyland Paris news be a little light. This very reason is why the Asian parks (Tokyo Disney Resort, Hong Kong Disneyland and Shanghai Disneyland) rarely get a mention, instead opting for their own version of D23 held in Japan. Regardless a Disneyland Paris of some description presence is still very likely, and until a D23 Europe happens the resort will continue to get some sort of news or mention.

With all of that in mind, here are some pieces and projects I think we could expect from the D23 Expo 2019. It should be noted that this is in no way confirmation or any sort of tease towards the panel and expo. I don’t have any insider information (as much as I wish to!) and everything here is merely my own speculation based on current future plans, previous years’ patterns and current rumours.

Of all possible Disneyland Paris news and projects this is the one I am the most confident we will get news on. Replacing Armageddon and set to be part of the future Marvel land, the upcoming Spider-Man attraction we already know will be an interactive experience based around a brand new story of a Tony Stark lead initiative to find the future heroes.

The attraction, dubbed ‘Project Slingshot’ internally, will be following the trend of many recent new additions and open in more than one Disney park. Though Walt Disney Studios Park may be the first to get the upcoming adventure with Spidey, Disney California Adventure will also get the attraction for their own future Marvel land. With D23 Expo 2019 likely to take an understandable focus on the US resorts I feel we can get news on this attraction under the subcategory of Disneyland Resort news.

An official, finalised name I think is almost guaranteed to be unveil at the expo, along with perhaps some new concept art and details on how the interactive elements will operate. With officially released plans revealing information such as a pre-show and after ride gift shop I think it is likely these features could also get a marketing backed confirmation.

Of course Spider-Man won’t be the only thing coming to the Studios’ Backlot as a fully dedicated Marvel land is part of the park’s ever creeping closer future. With many aspects of this entirely new land set to be open, or nearing completion, by the time the next expo rolls around in 2021 I think is certainly likely more details could be given during this year’s panel.

The biggest indicator from this actually comes from the D23 Expo itself and its description of the planned Disney Parks pavilion found on expo’s official app. “Get an inside look at projects in development for Disney parks worldwide, including the transformation of Epcot at Walt Disney World and Tony Stark’s new Avengers training hub coming to Disneyland Resort, Disneyland Paris, and Hong Kong Disneyland.”

Anaheim permits recently suggested that a PYM Technologies themed restaurant (something very likely to be coming to WDS) may also join the Marvel land roster in DCA. Should more details come from this then that is another notch that can be added to the Disneyland Paris news belt. As Rock ‘n’ Roller Coaster avec Aerosmith is just weeks away from permanently closing, details on the Iron Man and Avengers replacement could be on the D23 Expo 2019 horizon.

2017’s expo of course saw the DLP announcement of Hotel New York’s retheme with added Marvel touches. Although we already have a lot of details including a look at rooms, the lobby and restaurant I would not rule out a quick recap to help advertise the hotel to an American audience for Summer 2020.

It’s the biggest and most ambitious project to ever come to Disneyland Paris and it didn’t even need the fanfare of a D23 Expo to announce it. The Walt Disney Studios Park expansion plan was unveiled right in-between expos and was still a pipe dream when we last heard about the future of the resort during the 2017 panel.

The expansion is such a major project and has become so ingrained into Disneyland Paris fan rhetoric that is simply is too big to be ignored at this year’s convention in one way or another. Keeping my expectations in check and level-headed hat on, I don’t think we should hope for too much regarding the expansion. While projects like Pandora and Galaxy’s Edge got entire scale models on the show floor I can’t see that happening for the Studios at D23 Expo 2019; as much as I’d love to be wrong!

What I think is likely however is a small update during the Parks panel. A mention on the impressive figures the expansion is set to create and cost, as well as reassurance that the project is continuing to run on schedule. A new piece of concept art would be wonderful and very welcome too, especially as the as of yet only piece of the entire plan is in need of updating after the cancellation of Alien Swirling Saucers and announcement of Cars Tram Tour.

No matter the topic or niche fandom, one thing all convention panels that have in common is the excitement that comes from surprises. The sheer euphoria that comes from a reveal nobody expected is second to none and something that is then emulated once word reaches the greater online presence.

This one may be a little more outlandish compared to my other guesses, but I’d imagine a surprise Disneyland Paris announcement would go down well with the audience and is the ultimate platform to reveal something to tell the whole world about.

Once again, let’s keep our expectations in check before we dream of an unexpected unveil. We aren’t going to see a 3rd park promise, nor will the joyous return of de la Terre a la Lune become the headline story of the panel.

An attraction that has seen rumours circulating for Disneyland Paris however is Mickey & Minnie’s Runaway Railroad. Just as the future Disney Hollywood Studios dark ride will see a clone coming to Disneyland’s ToonTown, it certainly isn’t impossible Paris could see its own version in either WDS or Disneyland Park. The latter of which hasn’t seen a new attraction since 2006.

Should such an announcement come from the D23 Expo 2019 it would definitely be a surprise for DLP fans. As of yet no official communication has hinted towards Runaway Railroad, with talk of it only appearing on the ever varying in credibility rumour mill. What with Walt Disney Imagineering’s outflowing pride for this attraction as well as the openness to clone it for other resorts I do feel this is one that cannot be ruled out despite to a lack of official acknowledgement.

The D23 Expo 2019 is sure to be a very exciting weekend for Disney fans all throughout the world, so much so that I am very happy to say that I will be at the convention this year to visit and report on any Disneyland Paris news there may be! Whether there will be lots of news or not you can be sure that you will be able to read all about it here as well as following along on my Twitter!

The Disney Parks, Experiences and Products panel commences on Sunday 25th August at 10:30am PDT / 6:30pm BST / 7:30pm Disneyland Paris time. Be sure to follow me @thedlpgeek for live tweets all throughout the expo weekend including any Disneyland Paris news and info.