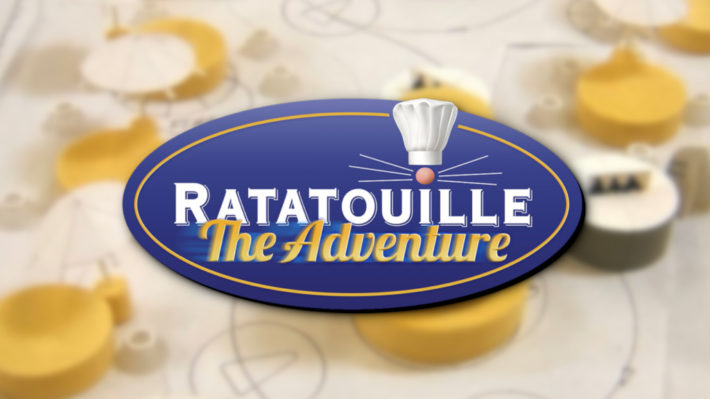 Five years since opening Ratatouille has become a staple part of Walt Disney Studios Park. When the attraction opened in mid 2014, officially marked as the “60th attraction in Disneyland Paris”, it was unanimously praised by Imagineers and guests alike for its groundbreaking trackless ride system and extensive technology used to bring Remy’s adventure to life.

That said the attraction did have its share of critics, including myself. Despite the gorgeous mini-land that encompasses the dark ride and the attempt to blend screen based 3D technology with real, physical props, the former was overbearingly relied on. This created an imbalance with the ride experience feeling more like a light four dimensional movie than a thrilling chase through Gusteau’s kitchen.

It seems however this plan for a screen imposing hybrid was not always planned for the Studios E-Ticket. Original concepts and plans suggest the attraction would have been tipped entirely the other way with physical props and giant sets being the key puzzle pieces used to immerse guests.

Appearing in episode 4 of the Iwerks & Co. documentary The Imagineering Story, several key personnel behind the creation and concept of Ratatouille discuss initial plans for the attraction and the evolution that proceeded into what we know today. As The Imagineering Story has not yet released in all regions of the world the rest of this article should be taken with a spoiler warning for the series, particularly the fourth episode ‘A Carousel of Progress’

Early into the attraction’s infancy, long before a name was decide or slab of concrete laid, plans for a Ratatouille shaped adventure were very different. Imagineers under blue-sky thinking labelled the project a modern day iteration of the 1955 opening day Disneyland dark ride Mr. Toad’s Wild Ride. Much like the beloved fan favourite, Ratatouille would have heavily relied on loud, colourful props, sharp turns and intense spinning to take guests on a high adrenaline chase through the manic restaurant’s kitchen.

Although still in the early stages ideas for a prop heavy Ratatouille was under serious consideration, enough for scale models to be created. Shown for the first time ever in the documentary, we see how scenes penned for the attraction saw guests rush under a dining table, scurry right through the heart of the kitchen and even a into miniature, ‘rat sized’ restaurant not unlike what we see at the end of the final product.

In order to create the desired illusion that guests have been shrunken to the size of a rat, enormous physical props would be required. Ultimately it was decided that such a venture was too ambitious to achieve under the realistic scope and resources Walt Disney Imagineering must factor in. As a result, 3D based screens and simulation was decided to be the best solution of bringing the Ratatouille story to life.

“We tried to do it all with theatrical sets and we couldn’t get what we wanted from an illusion perspective, from a storytelling perspective and so we made the leap to 3D animation, combined with show set pieces because we wanted to blur the lines between what’s digital and what’s real.”

The Ratatouille attraction initially pitched and the one that opened in 2014 may be very different but remnants of that original plan do survive. The fridge scene found in today’s version is often argued as the best part of the entire attraction consists almost entirely of physical props. This short but memorable moment of the attractions feels to be cut from the same cloth of that original idea. A glimpse perhaps into what the entire dark ride could have been.

Half a decade on and Ratatouille continues to rank high in guest satisfaction levels in Walt Disney Studios Park, if becoming a conflicting subject for fanatics. A lack of maintenance has left the attraction in a poorer state than it should, with last year’s cancelled refurbishment yet to find a replacement date.

That said, the Mouse and Walt Disney Imagineering are not fully done with Ratatouille yet. Next year is set to see a clone of the dark ride open in Epcot’s French pavilion at Walt Disney World. Although lacking the Place des Remy location and connecting restaurant the attraction appears to be almost identical to its Parisian sibling.

What are your thoughts on these original ideas for Ratatouille at Walt Disney Studios Park? Are you happy with the attraction we got or would rather have saw this idea dreamed up instead? Be sure to tell me your opinions over on Twitter!