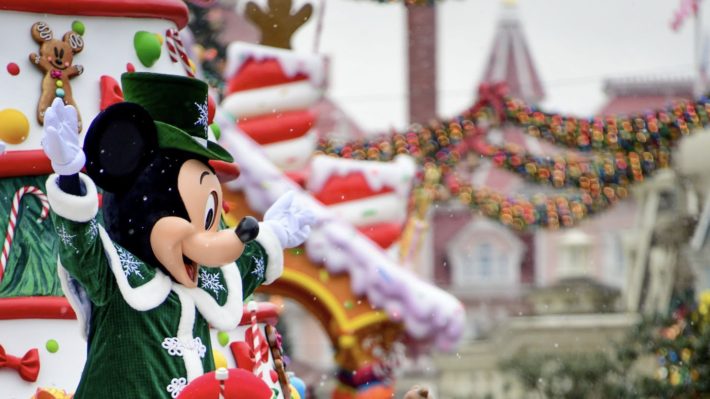 Christmas 2019 is here! After a year that brought up epic battles between Pirates & Princesses, web-slinging heroes saving the day and jungle rhythms call throughout, we’ve now reached what to many is the most magical time of the year. Well into the official launch now there is no doubt the festive season is well and truly at Disneyland Paris.

There’s no denying how special this time of year is to many people. The Christmas period is a favourite for many all across the world and Paris’ affinity with it has in itself played a role in that love the season receives. There are plenty of guests who wait all year for an annual Disney trip in the Winter wonderland-ness of Main Street U.S.A., either to begin their own celebrations of Christmas or even during the big day itself.

Indeed, DLP seems to have its own traditions tied to the holidays. Since its revival in 2013 every year the season has seen additions in some shape or form. Be that a new float for Disney’s Christmas Parade, a new show taking over the Royal Castle Stage or even an entirely new nighttime spectacular in Walt Disney Studios Park. Lately Christmas really has been the time for giving and DLP loved to give returning guests something new to experience.

This year however, things are different. Rather than bringing something new to the table Christmas 2019 has opted for the vast majority of its shows and entertainment to be re-runs of previous festive times and seasons. The Christmas Parade and Mickey’s Christmas Big Band remain untouched from last year while the castle stage show has seen a – albeit slightly reworked – version of the Starlit Princess Waltz that ran through the 25th Anniversary and occasionally beyond.

In matter of fact, some content has been removed from the Christmas offering. Walt Disney Studios Park is lacking its nighttime spectacular Goofy’s Incredible Christmas and Studio Theater continues to go underused seeing nothing during the Winter months. Even the iconic sparkling lights that normally dazzle Sleeping Beauty’s Castle as night falls are not present this year, pending a rumoured refurbishment of the Disneyland Park icon in 2020.

With this lack of progress (or indeed, regress) many feel that this year’s Christmas time at Disneyland Paris is lacklustre compared to others. Though it may be – and I’m absolutely sure is – still a magical time and one first time Xmas-goers those familiar with what the resort usually pull out for this time of year may be disappointed.

So why is this? How has arguably the strongest time of the DLP calendar become just shadow of its former self? How have guests this year ended up with a ‘Christmas Lite’ to see off the year?

The truth is there isn’t one single answer. There is no one thing you can point to as the reason to expel from existence and fix it. No, the problem is more complicated than that and is, in a way, a domino effect of both the past 12 months and what is soon to come. Christmas 2019 has just found itself sandwiched between two key moments in time where it has no room to breathe.

When it comes to entertainment at Disneyland Paris, and more specifically short term ‘seasons’, 2019 has been a year plentiful of them. The year of course opened with the duel celebration of Star Wars and Pirates & Princesses, with the Marvel superheroes joining the party not long after in the Studios. Summertime saw the very short but noteworthy Toy Story Play Days just before Disneyland Park was blown away with the spectacular Lion King & Jungle Festival. A season so well received it was quickly announced to return before even finishing its inaugural run.

All of these events (not forgetting October’s Halloween festival and duo of soirées) add up so by the time Christmas rolls around the entertainment budget is starting to run out. Anyone who was lucky enough to check out this summer’s “roar-some” season and its several high energy, complex shows will clearly be able to see that is where the majority of resources for this year went into. That is no bad thing, not at all. That large allocation on The Lion King & Jungle Festival meant we got a season Disneyland Paris can truly be proud of. It has however possibly meant new additions to Halloween and Christmas had to be axed in order to balance out the books.

There is also the matter if park development and what is planned for the future, which sometimes means sacrifices need to be made. With almost the entirety of Backlot now decommissioned and work well underway in transforming the former land into Avengers Campus, Walt Disney Studios Park is now two attraction and two restaurants lighter than it normally is. This means accommodating guest capacity is now a vital quest and something that can’t be reduced without potential overcrowding. With the E-Ticket Rock ‘n’ Roller Coaster now gone for an Iron Man makeover, it simply isn’t feasible for The Twilight Zone Tower of Terror to close early in order for a nighttime show to be projected onto it.

The Studios park has a very bright future ahead. The three lands that are coming, along with the gorgeous new lake, are going to completely transform the entire second gate and hopefully turn it into the full day beauty we all want it to be. Though to get to that stage we first must go through the transition period that turns the WDS of old into what we’ve all seen and fallen in love with on that concept art. Unfortunately this means that some things will need to be cut or removed in the interest of ensuring the rest of the park can run smoothly and safely while construction teams are hard at work doubling its size. This is what’s happened with Goofy’s Incredible Christmas. A price to pay, but one that will be well worth it in the long run.

While you can look at Christmas this year and wonder why isn’t there as much as there before, there is another side of the coin that could be asked. Where we spoilt before with too much content during the festive period?

It is certainly true that Christmas 2019 at Disneyland Paris doesn’t have as much to see and do compared to last year, but that doesn’t mean we are in a drought of festive cheer. From the wonderfully upbeat Disney’s Christmas Parade and harmless Let’s Sing Christmas and Royal Sparkling Winter Waltz to the nigh perfect Mickey’s Christmas Big Band, the season has plenty of shows to keep moods high and magical spirits up no matter the weather or time of day. Topped with at least one nightly performance of the tree lighting ceremony when the sun sets and you have more than enough for a full day’s worth of Xmas entertainment spread between the two parks.

Christmas 2019 may be a season that lacks in variety, and isn’t quite the overload feast of content many are now prone to expect this time of year in Disneyland Paris, but it is still a magical time to visit and one I believe all can still enjoy. New adopters to the season can still have the festive time of their lives while returning faces, though maybe disappointed at first, will quickly lose that ‘Bah Humbug’ attitude when the Santa comes parading upon his sleigh past the castle, or Mickey flexes his musical skills in a superb drum solo.

Even in this ‘Lite’ form, Christmas is still an incredibly magical time to visit Disneyland Paris.