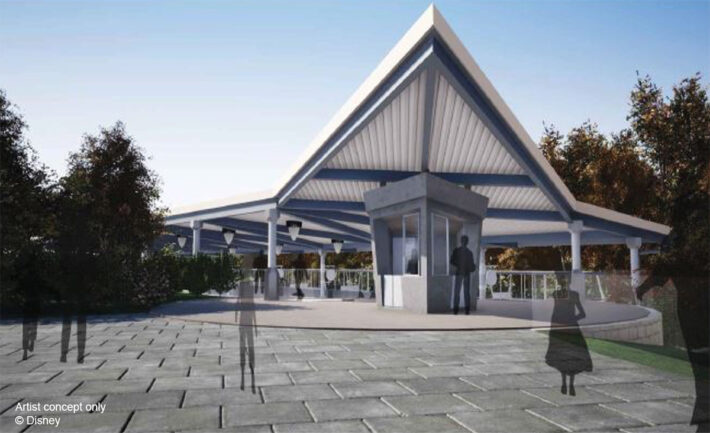 Cars Route 66 Road Trip has been delayed to a 2021 opening as our first look of the newly constructed entrance has been unveiled.

The family oriented re-theme of Studio Tram Tour into the Pixar Cars universe was originally scheduled for a Summer 2020 opening before the global pandemic and subsequent resort closure changed that to a more vague ‘2020’ finish date. As Disneyland Paris now enters the fourth week of its second temporary close, the attraction’s debut has been pushed once again to next year.

The long-standing and great collaboration between Disney Imagineers and Pixar continues — together, they’ve designed a family-friendly journey, discovering some of the wacky roadside attractions along the famous Route 66 highway.

With the wait a little longer until we can join Mater and Lightning McQueen on the open road, Disneyland Paris has provided a first look at the brand new entrance to tied fans over until the new year. Along with a progress update of the current construction of the site an architectural visual (sans any theming) was also provided.

Located just behind Place des Remy from a new stretch of pathway from Toy Story Playland, the entrance and loading building is inspired by mid-century modern architecture. Although at first glance they may look more The Incredibles than Cars, we are promised plenty of Route 66 and nods to the popular franchise as guests are taken through a tourist booth setting.

Cars Route 66 Road Trip is being seen as the first true addition to the hugely anticipated Walt Disney Studios Park expansion, although not officially listed as part of the project. The €2 billion venture is set to see the park double in size, with Avengers Campus, a dedicated Frozen land and lake all coming in the near future.

Last week during the IAAPA Virtual Education Conference, Disneyland Paris fans got a glimpse of the attraction for a moment during a showcase of upcoming projects. There we saw the water tower of Catastrophe Canyon has been repainted to the Cars brand Dinoco, matching that of the truck and previously seen concept art.