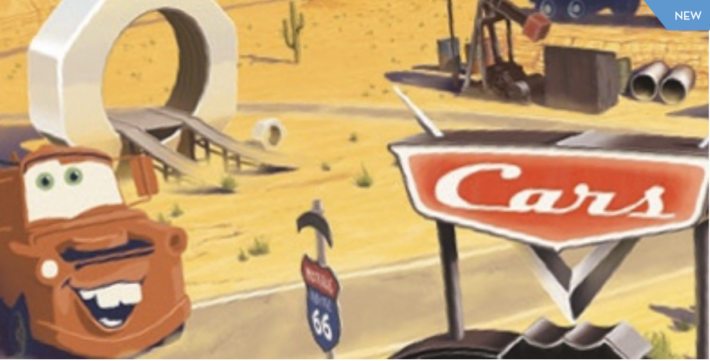 Brand new artwork for the upcoming Cars Road Trip attraction has appeared in the latest Disneyland Paris digital brochure, giving guests a preview of what to expect from the new attraction.

This re-theme of Walt Disney Studios Park’s opening day Studio Tram Tour is currently set for a 2021 opening after several delays due to the global pandemic and the resort’s subsequent closures in relation. Although details are vague several aspects which are known have been given more perspective with the release of two new pieces of artwork advertising the attraction.

The first depicts the newly repainted and Cars-ified oil truck which sat in the centrepiece part of the Tram Tour, Catastrophy Canyon. It seems that the fire and water effect present in the original version will return for Cars Road Trip as both elements appears once again in this new visual piece. This is the second time the truck, now draped in the blue of Pixar’s Dinoco brand, has made a key appearance in the marketing of the attraction, suggesting it too will be the stand-out component of the new attraction.

Sidekick Mater gets a starring role in the second new piece of artwork, accompanied by the ‘World’s Largest Lug Nut’, a set piece previously mentioned in older press releases on Cars Road Trip. The new visual hints towards the attraction adopting a dessert aesthetic (a considerable challenge due to the small forest located within the old Tram Tour’s track) while the aforementioned lug nut appears to have ramps at either end.

These pairing artistic visuals were published inside the new Disneyland Paris digital brochure, advertising the resort to future guests for the 2021 year. This annual release is always one of much engagement for fans as small nuggets of new information or news can sometimes be found as DLP prepares for a hopeful re-opening in the coming months.

If your crew has little wannabe Lightning McQueens in it, steer them over to our new Cars-themed attraction, an easy-going, sightseeing tour with their beloved heroes from the popular Pixar franchise Cars. Make sure you have your camera handy, as you’ll pass a range of picture-perfect natural and mechanical wonders from the American Southwest.

Also appearing in the latest digital brochure is another updated rendition of the Walt Disney Studios Park map. As work continues on the resort’s second gate and the €2 billion expansion project really sets up a gear, the visual guide to the park will see a number of revisals and revisits as new attractions, areas and lands are added. For this year the upcoming Cars attraction has seen more detailed added to its scaled down representation with an official logo and Mater included to boot.

While this update map’s logo suggests the attraction will be named Cars Route 66 Road Trip, latest communications from Disneyland Paris has dropped the famous American road name dubbing it simply Road Trip. Rather interestingly, this is the only mention of any name to appear anywhere in the latest digital brochure, with it otherwise listed as a new “Cars-themed attraction”. It is possible that the name of next Pixar experience for WDS has not yet been finalised, and such no name was chosen to avoid future errors.

Cars Road Trip is scheduled to open in Walt Disney Studios Park sometime in 2021, though no exact date is yet to be announced.