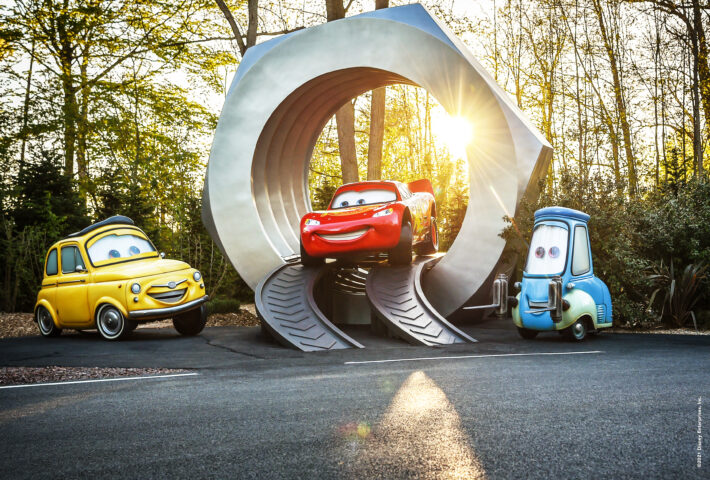 Cars Road Trip, the next new attraction for Walt Disney Studios Park, will official open on 17 June, it has been confirmed.

It was announced last month that the Disney Pixar inspired attraction would welcome guests for the first time when Disneyland Paris re-opens to the public after its second temporary closure. Now, with news of the resort’s return officially planned the wheels have truly been set in motion for the resort’s newest addition.

The re-theme of the original opening day Studio Tram Tour promises to take guests on a Cars inspired road trip through the famous Route 66, where they will meet Lightning McQueen, Mater and friends along with landmarks including the ‘World’s Largest Lugnut’ and roads inspired by the great American national parks found all throughout the country.

The set piece however will be the Cars-ified return of a fan favourite from the original. Cars-tastrophe Canyon as it is officially called will see guests once again witness the effects of an earthquake and flood within their trams, with some not so subtle touches added to bring it into the world of the Pixar franchise.

It has been a long and winding journey for Cars Road Trip since its initial announcement in the summer of 2019 with a promised opening of the following year. The brakes were of course applied after the sudden emergences of the global pandemic and Disneyland Paris’ subsequent two temporary closures. The finish line seems to finally be in sight however as we reach the final corner of the attraction’s construction history, eager to take the opening day flag on 17th June.

The attraction’s entrance will be found just behind that of Toy Story Playland according to recent park maps. This means guests will need to go on a road trip of their own past other Pixar inspired mini-lands before threading the needle past RC Racer to find the Art Deco inspired entrance.

This will be the first of several additions planned for the Studios in the coming months and years, with the lineup looking to increase in hype performance the further we go. Next on the podium will be Disney Junior Dream Factory when it fully takes over the original stage and show building in Production Courtyard with an unique show for all the family. Also speeding along the horizon is the very much anticipated Avengers Campus, which will eventually join its Californian counterpart as part of an expanded theme park universe and Europe’s hub for Earth’s Mightiest Heroes.