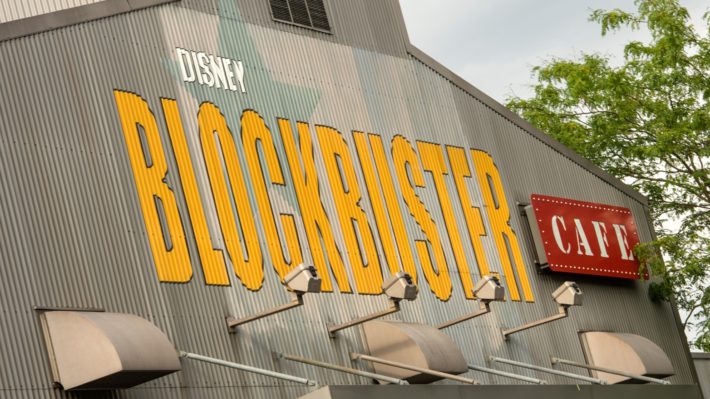 Blockbuster Café has closed for good in Walt Disney Studios Park, making way for the future Avengers Campus land in 2021.

The restaurant was initially set to remain open despite the closure of the majority of Backlot. A decision that appears to have been changed now as construction fences now cut guests off from any access to the cafe.

Blockbuster Café was an opening day restaurant for Walt Disney Studios Park, though it began life in 2002 under the name Backlot Express Restaurant. Rather ambiguous on theming it was a quick service eatery populated with random and obscure props of movie making and Disney parks history. Some notable inclusions were a genuine Speederbike from Star Wars – Episode VI: Return of the Jedi and a spaceship from beloved Epcot attraction Horizons.

By 2009 the restaurant received a minor retheme and rename into the Blockbuster Café we knew up until its closure. Guest seating was split into 2 rooms themed to Pirates of the Caribbean (the movie franchise) and High School Musical. The latter was ultimately changed to a makeshift Iron Man theme shortly after the success of 2012’s The Avengers and its follow up Iron Man 3.

It appears that the superhero giants will not be leaving the premises altogether as Blockbuster Café’s replacement will be part of the Avengers Campus project for the Studios. Already announced for the land will be an interactive Spider-Man dark ride while the Rock ‘n’ Roller ride layout will get a facelift thanks to Tony Stark and the Avengers.

As of yet it is currently unknown what the old restaurant will become, but a recent model of the land from D23 does confirm the building will remain in its current location. Early concept art for Avenger Campus hints towards a PYM Technologies retheme of Restaurant des Stars. As both locations share the one building, is it possible they could be combined to become one, super capacity Ant-Man and the Wasp restaurant?

Did you ever eat at Blockbuster Café or its original Backlot Express version? What do you think will come in its place at Avengers Campus? I’d love to hear your thoughts so be sure to let me know over on Twitter!