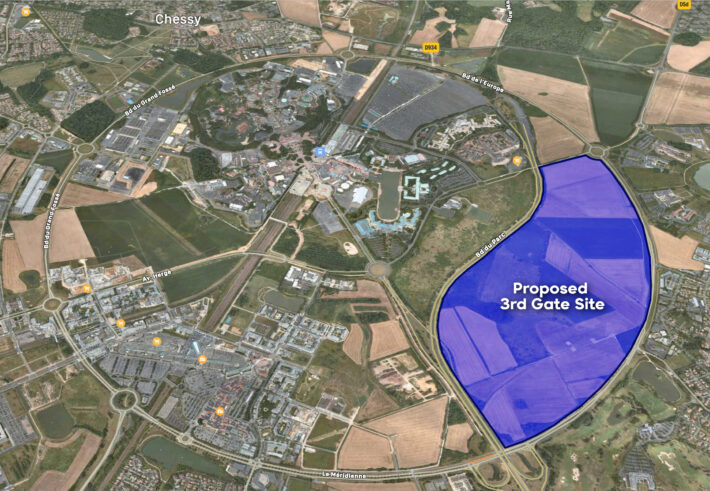 Construction has started on a berm that surrounds part of the plot of land currently proposed for a future 3rd gate at Disneyland Paris, it has been confirmed.

Magny-Le-Hongre, the commune which neighbours the resort that some Disney owned land falls into, announced it via their official website, alerting that construction work is set to begin along with some key details about the project.

Scene throughout most Disney theme parks in the world, a berm is a barrier used to shield sight and sound from two locations. For Disney these are typically man made structures disguised to look natural (such as a slope or hill) to create a natural break off between the themed environments and the outside world.

The new berm announced today will vary in height from 1.5 meters to 5 meters tall, measuring at a length of 800 meters along the east side of the plot of land most commonly known to be a site for a proposed 3rd gate at the resort. Being short in length it is likely this berm will be just the first part of a multi-staged project, perhaps to allow Disneyland Paris to observe how it will look against the landscape of the resort and surrounding area.

This large plot of land is of significant note as it one which has been marked on several occasions as a proposed site for a 3rd gate, joining Disneyland Park and Walt Disney Studios Park in making DLP a 3 theme park resort. Located next to several off-site hotels the enormous plot of land would be an excellent location no just for another gate but also additional hotels, transportation routes and more.

A third theme park in Disneyland Paris is something that has always been rumoured and seen as an eventuality for the resort, particularly as ownership of the land depends on it becoming an actuality. Despite this news and the construction work which will soon be seen it is unlikely this means another park is anywhere on the horizon. Indeed, Magny-Le-Hongre mentions that the plot of land DLP has proposed for 3rd gate on would only see fruition in 2036 at the earliest.

Other priorities are well in the minds of DLP and The Walt Disney Company to be thinking of another park. Not only has the global pandemic and consequential closures leads to a number of massive shifts throughout Disney as a whole, but the Studios is still in the early stages of its massive €2 billion expansion, with work continuing on Avengers Campus, the dedicated Frozen land and centrepiece lake.

Work on this new berm is set to begin and continue through the end of 2021 and into early 2022.