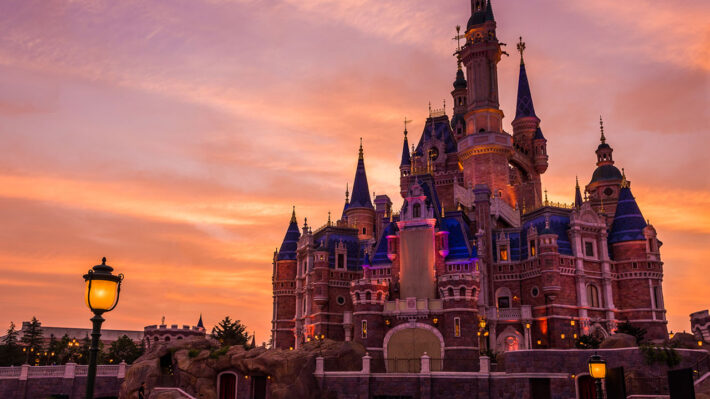 Today Shanghai Disneyland welcomed guests back through its doors for the first time in months. First announced by Disney CEO Bob Chapek during the latest earning calls the Chinese resort is the first park to see a return to somewhat normality since the coronavirus COVID-19 pandemic forced all seven to temporarily close.

This was not a standard opening, though. Many serious and important measures have been put in place to ensure guest and Cast Member safety when visiting Shanghai Disneyland.

Those hoping to return to the ‘Authentically Disney, Distinctly Chinese” resort will first need to secure their ticket via an online reservation system. This will also include Annual Passholders meaning no guest is guaranteed entry, particularly as the park will be operating under a majorly limited capacity of less than a third of what normal day would bring.

The globally recognised social distancing rules will of course continue to apply for guests lucky enough to enter the park, but not before a show of ID, QR code health card and a temperature check. Face masks must also be worn at all times by both guests and CM’s, with the exception being whilst eating in one of the limited capacity restaurants.

Work has also gone underway to clean and sterilise any and everything guests and Cast may come into contact with at the resort during a visit or working day. Other measures include a limit to seating in attractions, the absence of shows and parades which would create crowd gatherings and the altering of character meet & greets.

It is very early days if Shanghai Disneyland’s reopening can be deemed a success, but is a clear indication that Disney are exploring the idea of reopening their parks. Hong Kong Disneyland is very likely to be next to experiment with a gradual reduced opening, but what will it mean beyond the Chinese resorts? What can be learned from these ventures to bring the magic back to Disneyland Paris?

The short answer is disappointing, but we just don’t know yet. While Disney’s youngest park may be leading the line in possible countermeasures to keep guests safe from the virus, for lack of a better term they are also being used as a test subject for the rest of the company.

Social distancing rules currently being enforced in Shanghai will no doubt come to Paris, Hong Kong, Tokyo and the US when the time is right to open their respective magic kingdoms. It is a practice globally accepted now to a point I feel many will automatically follow even without signage and instruction to. This in part will no doubt mean that other elements of the SDL approach will bleed over into other resorts, including Disneyland Paris.

Once Marne-La-Vallée starts welcoming guests again, whenever that may be, it’s pretty likely shows and spectaculars such as Stars on Parade and Disney Illuminations won’t return with it straight away. I also suspect a number of attractions, stores and yes, restaurants, will also remain locked up as capacity to the parks will be limited.

China’s approach to a more digital park entry experience is something surely inevitable as well. An online reservation system means that only those who are sure to enter the park for the day will travel to the resort, eliminating the chance of large crowds hoping for an opportunity to buy a day ticket. With the world already moving towards a more digital and ‘paperless payment’ one, the COVID-19 coronavirus pandemic has only sped up measures as more businesses now only accept transactions if done via contactless means. Again, to ensure the least number of surfaces being touched by both guests and Cast, this I’m sure will make its way to all the Disney parks for reopening.

This is where complications start to rise for Disneyland Paris, and as such pushes that elusive, hypothetical reopening out further to the horizon. DLP has been somewhat infamous for being behind the times when it comes to the latest technology in guest experience, with steps to bring the resort into the age of today struggling at best. Fast Pass is still an entirely paper based process in both Disneyland Park and Walt Disney Studios Park with restaurant reservations something only achieved in person or via a phone line. As for online registration, I think everybody has had an unfortunate run-in with Lineberty by now.

If these measures are instrumental to the reopening of Disneyland Paris, then they need to come, and they need to be ready from day 1. In this coronavirus world a theme park will not and can not open if several of its vital changes are stuck in a ‘coming soon’ purgatory. If that means more time is needed for the resort to be technologically ready, then more time is what the resort will get.

Then there are other factors and how they translate from the Asian parks to Europe and beyond. How will the social distancing measures be enforced? Will guests respect the limited seating in attractions and restaurant or simply go where they like? How do you tell a young guest they cannot hug Winnie or Rapunzel despite being in the same room as them?

Problems like this of course aren’t exclusive to Paris but the world over. Indeed, we don’t even know yet how these questions will be answered in Shanghai Disneyland. Seeing the park reopen is a great and very positive sight for fans all around, but there is still the very real possibility of things not working out. New CEO Bob Chapek did mention at that earnings call should this phased return prove to be heading south he will have no hesitation to temporarily re-close the Chinese park again.

Another component to the reopening mechanism Chapek set out is that Disney will only open a resort if it makes a return for the company. In other words they aren’t prepared to swing open the gates if they end up losing money in expenses while nobody shows up. That in itself raises many questions for resorts like Walt Disney World and Disneyland Paris, both of whom rely heavily on international guests be that European or worldwide.

This indicator rests significantly on the wider public and government bodies and their confidence of foreign travel in this pre-vaccine society. Right now many countries require those arriving to spend up to two weeks in quarantine before being allowed back out into the public, with other countries flat out refusing entry for certain nationals. Public psyche is arguably just as important. How comfortable will people feel boarding a confined plane or train within the coming months?

We are in unprecedented times right now. It may sound cliche or redundant to say but that doesn’t make it any less true. The Walt Disney Company have a mammoth task ahead of them to bring the magic back to their guests and the profits back to their investors. The coming weeks and months will be filled with hugely important decisions that must be made at the right time with the safety of guest and Cast Members alike being at the forefront of it all.

This may mean Disneyland Paris will remain closed for a long time. The question of when is one that has an answer but an unsatisfactory one; we simply do not know yet. What we do know is that when it returns, whether in several months or more, it will be a worthwhile wait.