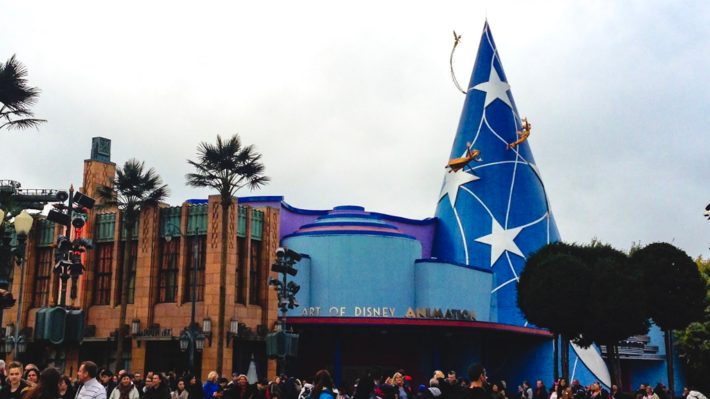 The Art of Disney Animation is finished. After sixteen years of taking guests behind the scene of animation magic, the attraction has closed its doors for the last time.

The announcement of the opening day show’s demise came just under a month prior, detailed as being to “allow for the creation of new exciting experiences as part of the Walt Disney Studios development plan”. Although no information has yet been confirmed as to what exactly replace it, this does open the door for some speculation purely on my own part.

The truly understand the weight and impact Art of Disney Animation’s closure has on the rest of the park, you need to go back to the very beginning of the Studios. When the Front Lot gates opened for the first time back in 2002, the then Animation Courtyard consisted of just three attractions – Animagique, Flying Carpets over Agrabah and Art of Animation.

Though a small roster for an entire park’s zone, it made up a whole third of Walt Disney Studios Park’s opening lineup. And in a park filled with high thrilling rollercoasters, spontaneously combusting special effect shows and long winded behind the scenes tours, there was very little targeted towards the family friend side of the market.

Art of Disney Animation had to stand up to cater for that sector. Time specific sidekicks like Mushu and creative guest interaction definitely enabled that to happen, but the park needed more. Animation Courtyard needed more.

Much like the Disney Studios itself among this time of year (the early 00’s), it was Pixar who came in to save the day and inject much needed life to the right hand side of the park. Additions like Crush’s Coaster and Cars Race Rally almost doubled the area’s attraction number while adding much sought after theming to the park. It was here where we also bidded farewell to the Animation Courtyard name and saw Toon Studios become the label of family friendly experiences at WDS.

More additions came not long after of course, as Toy Story Playland and Place des Remy wowwed guests and gave birth to the concept of lands within lands. All the while Art of Disney Animation prevailed, even if it’s attendance numbers were dropping.

Looking at Toon Studio today, it is a massive far cry from the barren, cold Animation Courtyard of old. What one started as a modest list of 3 experiences has expanded into a healthy nine. Two thirds of which are Pixar. Rumours have long circulated among fans that this was no coincidence. That sooner or later, Disney plans to tear up all three of the original Animation Courtyard attractions and give them way for Pixar experiences. This idea has never been confirmed or even acknowledged by the resort itself, but it’s easy to see the reasoning behind it.

With Art of Disney Animation gone, that leaves just one attraction of the original trio left, Flying Carpets. Being a spinner it is a clear and obvious candidate for a synergistic reskin, and there are plenty of properties from the ball and lamp to choose from. Indeed, as the attraction was originally not even planned to go in Walt Disney Studios Park, Carpets’ presence has always had the aura of finite around it.

There is of course two flies within my speculatory lotion, but nothing I feel can’t be quickly scooped out with a creatively observed spoon.

Mickey and the Magician is one of the highest rated shows in Disneyland Paris history, winning an IAAPA Brass Ring Award and a strong favourite among fans. There’s simply no way this all encompassing Disney musical would end its run prematurely and make way for Pixar just because continuity demands it.

Which brings me to next counterpoint, the official story. Taking a look at what for now is still our only piece of concept art showing the entire Walt Disney Studios Park expansion, both Art of Disney Animation and Flying Carpets are present. Although one of these has just went the way of many of its day 1 brethren, this does suggest the exterior will not be changing.

To these points I think I have the answer, or at least a theory weighted enough to give pause for thought. With Animagique Theatre and the now gone Art of Disney Animation placed right on the entrance to Toon Studio, I see no reason to discard the possibility of the area’s geography moving to exclude the pair from it. If a potential Pixar land was to begin directly after the two buildings, it gives both attraction’s the ability to live new lives as part of Production Courtyard or Hollywood Boulevard.

As for Flying Carpets’ appearance on the concept art, this could just be a case of schedule prioritising and Disney understanding demand and their own limits. It’s clear and obvious all attention must and is being focused towards bringing Marvel, Star Wars and Frozen to the park. Even if their plans are to eventually retheme Flying Carpets to a specific Pixar theme, they know it won’t be long until after this expansion project has been completed.

This theory of placing certain future projects on a back burner is also my belief towards the lack of a Mission Breakout overlay on the piece’s Tower of Terror. Though that is a story for another day.

Do you think it is Disneyland Paris’ plan to eventually turn Toon Studios into its own, Pixar dedicated land? Are you sad to see the Art of Disney Animation go or are you excited for whatever is planned for the building’s future? Be sure to let me know over on Twitter!