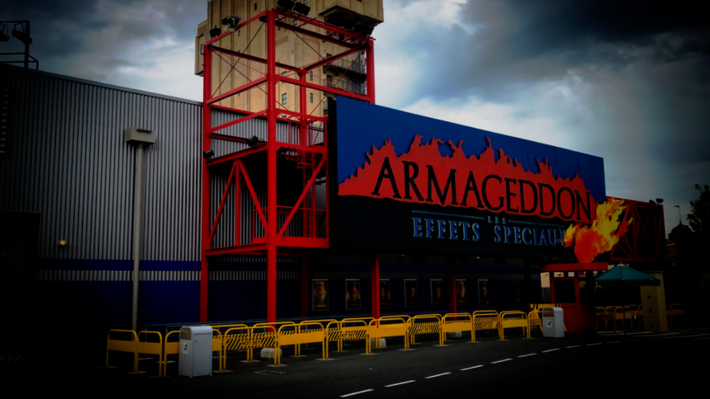 Announced back in January alongside Disney Junior: live on stage, Sunday 31st March 2019 was the final day of operation for the attraction. After normal park hours and special closing ceremony was held exclusively for Infinity Annual Passholders.

Armageddon was an opening day attract for Disneyland Paris’ second gate, situated as part of the entrance to the old Studios’ ‘land’ Backlot. Taking inspiration from other special effects driven attractions like Twister at Universal Studios, the 5 minute main show attempted to recreate a key moment from the 1998 Michael Bay directed movie of the same name.

Unfortunately Armageddon: Les Effets Spéciaux never received the love and support Imagineers had hoped for. An tiring theme paired with a boring pre-show three times that the length of an already lackluster main show meant the attraction failed to even garner a cult following. This lead many to eventually label the attraction as the worst in all of Disneyland Paris.

Guests who visited the attraction for its final few runs on the 31st March received a commemorative button to mark the occasion. AP holders in attendance of the closing ceremony were given a small piece of the Armadillo rock work set as well.

The day has come! 💥Guests who venture into “Armageddon: Les Effets Spéciaux” on its final day of operation today will receive this commemorative button (while stocks last). pic.twitter.com/CHWj7JBeu2

With Armageddon now closed for good, attention will slowly begin to be drawn towards the future and the Spider-Man attraction announced as its replacement. First seen in the initial Walt Disney Studios expansion announcement and additional concept art, it will eventually become part of a larger, entirely Marvel themed land where Backlot currently sits.

The as of yet untitled Marvel attraction replacing Armageddon: Les Effets Spéciaux will open in both Walt Disney Studios Park and Disney California Adventure in Anaheim. It is also set to center around an in-universe program known as Worldwide Engineering Brigade (WEB), established by Tony Stark with the focus of bringing the brightest young minds together to create new technology.

The Spider-Man future attraction as well as the entirety of the Marvel land will be part of the €2 billion Walt Disney Studios Park expansion announced in February 2018. The massive project will also see new lands themed to Star Wars and Frozen as well as new infrastructure in the form of a new lake. Overall it is projected to double the size of the park, with Armageddon’s replacement being just a small part of it.

What did you think of Armageddon: Les Effets Spéciaux? Are you sad to see this opening day Studios attraction close or are you excited for what the future will hold? I’d love to hear all opinions so be sure to let me know your thoughts on Twitter!