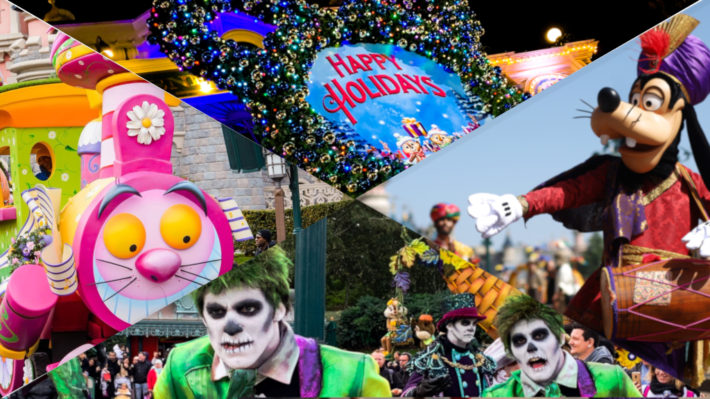 Update: New information has been provided regarding 7th Annual Pass event. Disneyland Park Celebrations will see the return of old seasonal shows exclusive for the event.

Disney characters will also meet guests throughout the night, changing their outfits sporadically to fit each of the four different themes of the evening. A select number of attractions, restaurants and shops will also be opened for the party.

Original article: The 7th Annual Pass exclusive event has been announced for this December, set to end the year with a bang bringing all four of the seasons together for one night.

Though untitled for now, the night will see Spring, Summer, Halloween and Christmas come together in Disneyland Park for an after hours special event on the 12th December 2019.

Annual Pass nights are exclusive special event parties available only to Infinity (and in some cases, Magic Plus) passholders offering those in attendance an extra special evening well into the night. Previous events have seen themes such as Marvel, Mickey 90 and Pirates & Princesses.

The next Annual Pass event, scheduled this September and prior to today’s announced party, is Disney Characters Night. The event is set to include 100 Disney characters for guests to meet throughout the first gate.

Little is known yet about what the 7th AP night will entail, other than it will allow guests to “experience 4 season in the one night!”

“From the wonder of Christmas & Halloween to the magic of Summer & Spring, join us at this party to end all parties!”

Although there was no dedicated Spring season this year, there are still plenty to choose from for the final arm of this 4-season spectacle. The massively popular Festival of Pirates & Princesses gained its highest popularity in the Springtime, despite a Winter return in its second edition. Much more likely however would be the equally popular Swing Into Spring season, which has been retired since 2016.

Tickets for the 7th Annual Pass Party go on sale on Wednesdays 7th August at 11:00am Disneyland Paris time.

Are you excited for this brand new Annual Pass night? Was there a different theme you were hoping for? I’d love to hear your thoughts and opinions over on Twitter!