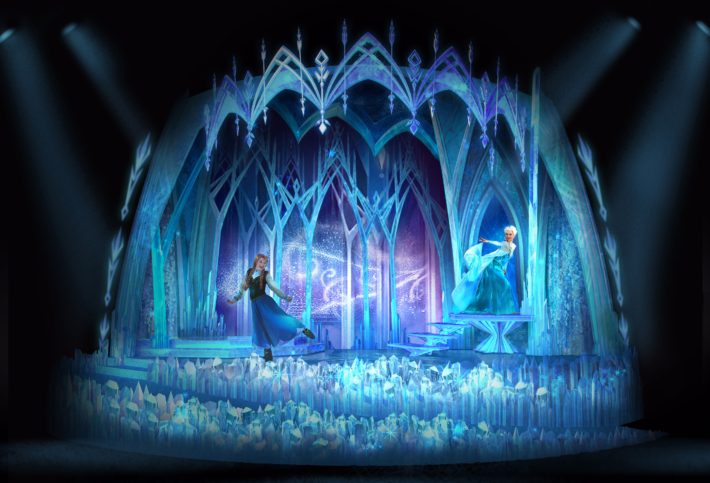 Animation Celebration will open with a celebration of Frozen from Sunday 17th November 2019.

Officially revealed several months ago, the attraction will be a part walkthrough, part interactive show, part meet & greet that brings guests through the famous scenes and characters of classic Disney animated adventures.

When the attraction opens later this winter the first tale to be celebrated will be the Walt Disney Animation Studios phenomena Frozen.

Guests will experience two mini shows during the Animation Celebration. One will feature Kristoff with his loyal reindeer buddy Sven, while the other brings guests into Elsa’s ice palace alone with the Snow Queen herself and beloved sister, Anna.

This brand new attraction will replace the already closed Art of Disney Animation found within the Toon Studio section of Walt Disney Studios Park. After the former opening day experience was removed back in January it was later revealed its walls would be housed by the Frozen characters in time for Christmas. The famous multi-plane camera found inside of Art of Disney Animation is set to remain inside Animation Celebration despite the retheme.

This is the second Frozen related news to hit Disneyland Paris in the space of a week. Just prior to the D23 Expo 2019 it was announced a brand new season would be coming to the resort based on the franchise.

Dubbed Frozen Celebration, it is the spiritual successor to the previous Frozen Summer Fun event and hopes to capture the wave this year’s Frozen 2 is likely to create. The season will run from 11th January – 3rd May 2020.

Animation Celebration will open with Frozen on 17th November 2019.