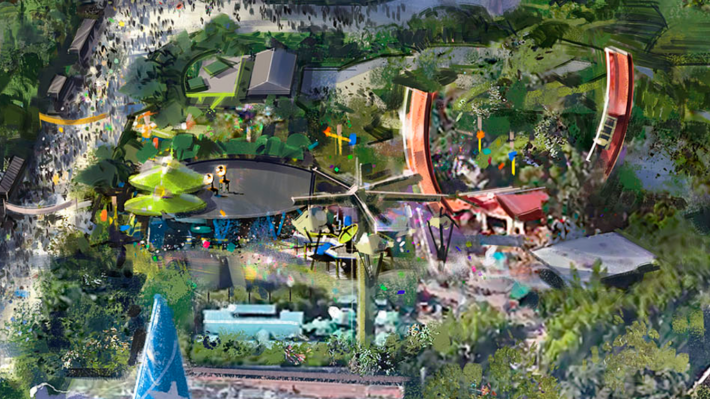 This summer may be all things Marvel related at Disneyland Paris with the resort slowly revving up towards its Marvel themed Annual Pass night, but things are very different across the big ol’ blue. Over in Anaheim and Orlando things are definitely taking a Pixar priority with the openings of Pixar Pier in California and Toy Story Land in Disney Hollywood Studios. The latter of which introducing two brand new attractions to the world. One of the premiering pair is of course Alien Swirling Saucers, an attraction all but confirmed to be coming to Walt Disney Studios Park’s version of the new land as part of the massive Studios expansion.

Although it hasn’t been confirmed, or even once mentioned by Disneyland Paris, eagle-eyed fans were quick to spot an elusive fourth attraction in Toy Story Playland. The blue and green structure has an almost identical appearance to that of the new attraction found in the Walt Disney World.

Now with the grand opening of Toy Story Land upon us we can finally see what this new attraction is all about and what we can expect should it indeed make the jump to Disneyland Paris.

Going off images and videos it seems that Alien Swirling Saucers keeps the trend of Buzz Lightyear themed attractions having bright green and purple colourschemes with cartoon backdrop walls depicting space scenes. The attraction’s queue really does feel like a close relative to Laser Blast over in Discoveryland. Whether or not this is a good or bad thing is down to individual taste but it certainly looks perfectly in place in the toy themed environment, as it would in our Toy Story Playland. Much of the queue does appear to be outdoors, but this is no real surprise or hindrance to a Parisian clone. All of the current experiences in the 8 year old mini-land already feature shelter-less sections of their lines.

The attraction itself would be a fine and harmless addition to Walt Disney Studios Park, if a tiny bit stale. Borrowing heavily from ‘Mater’s Junkyard Jamboree’ over in Anaheim’s Cars Land, the ride system is virtually identical, with tractor and trailer replaced with pod and spacecraft piloted by a green alien. It may not be the most interesting of attractions ever penned by Walt Disney Imagineering but I have very little faults with it. There is always a market for family friendly, light thrills particularly in TSPL which landscape is dominated with a half pipe and freefaller. My only complaint would be that the ride time does seem a little short when watching footage. This may be a temporary and deliberate decision however in an attempt speed up guest flow for the opening months at Walt Disney World.

Alien Swirling Saucers from the outside looks like a fairly okay, harmless attraction and I certainly wouldn’t oppose to it coming to Disneyland Paris. Should it make it’s way across the Atlantic and to Toy Story Playland – as the concept art foretells – its not one I’ll be itching to get into the queue of (especially if it replicates the 2 hour plus queue times from its opening weekend in Florida). It may not be the most fascinating or exciting of additions ever seen but then it doesn’t have to be. Perhaps that is why it was completely skipped over in the Studios’ expansion announcement. It is seen more as a little addition to help out an existing land rather than a big, flashy E-Ticket.

Would you be excited if Alien Swirling Saucers were to come to Disneyland Paris? Is there anything different you’d rather see in that open spot of Toy Story Playland? I’d love to hear your thoughts so be sure to send them my way in the comments below and on Twitter!